We speak to Digital Domain VFX Supervisor Kelly Port about working with Josh Brolin to bring Thanos to life for Avengers: Infinity War

Critical to the success of Avengers: Infinity War was the CG representation of Thanos with the task being shared between Digital Domain and Weta Digital. Most of our responsibility was for the heavy dramatic scenes of Thanos while Weta Digital did a sequence on Titan, explains Digital Domain Visual Effects Supervisor Kelly Port who looked after the creation of 513 final shots. He has upwards to 40 to 50 minutes of screen time, and is very much the main character. What Dan DeLeeuw (Marvel Studios VFX Supervisor) and Jen Underdahl (Marvel Studios VFX Producer) did was allow us two or three months before shooting to develop Thanos as a character, and put together a short cut which ended up being two or three shots. 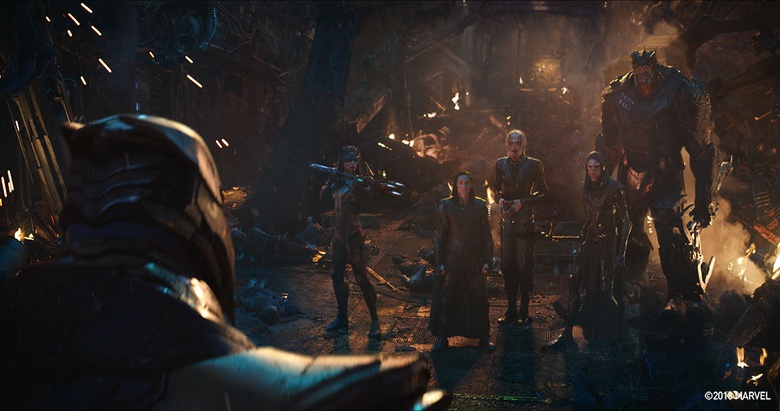 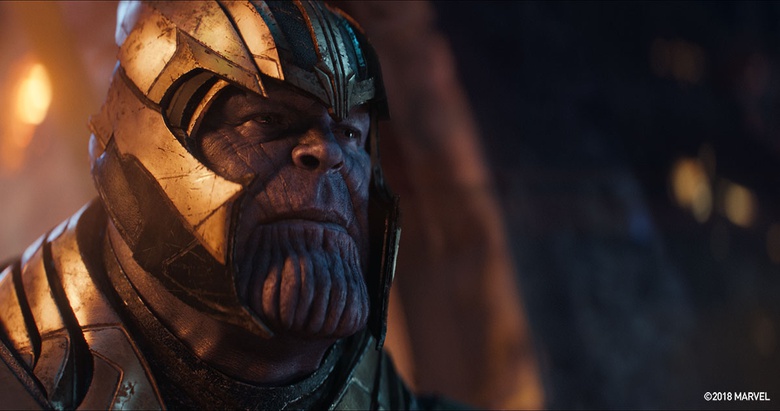 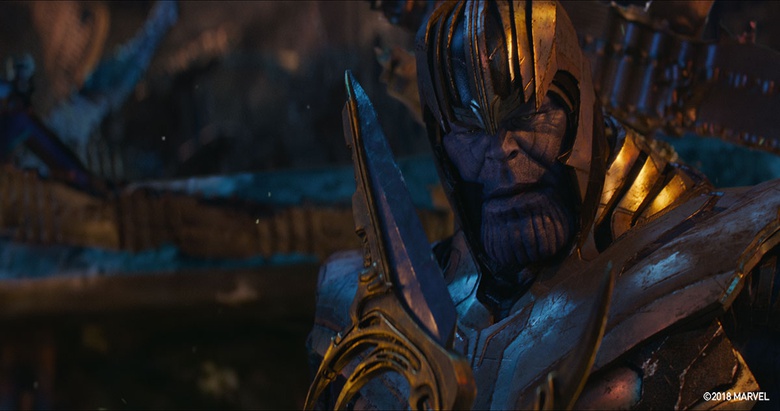 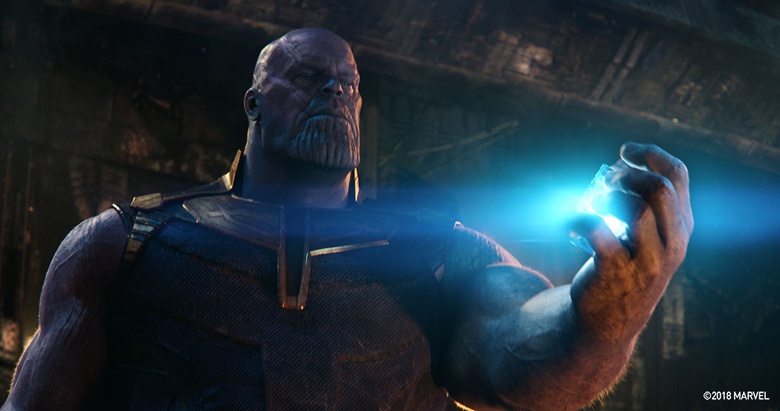 It used the process that we would ultimately end up using in the film which was Josh Brolin in his tracking suit with the helmet cameras on. We developed a transfer technique with Disney Research in Zurich that fed a low-resolution mesh were getting out of helmet cam and matched it directly into the high-resolution shapes we captured.

Josh Brolin was impressed with the early test results. Brolin was constantly thinking that he needed to exaggerate his performance in order for the subtleties to come through, remarks Port. However, when Brolin saw that even the subtlest nuance of the facial expression was coming through he realized there was no need to overplay it. The transfer technique is driven by a machine learning algorithm. We would have a side by side of Brolin and Thanos making a particular facial expression and its evolving throughout the course of the show. 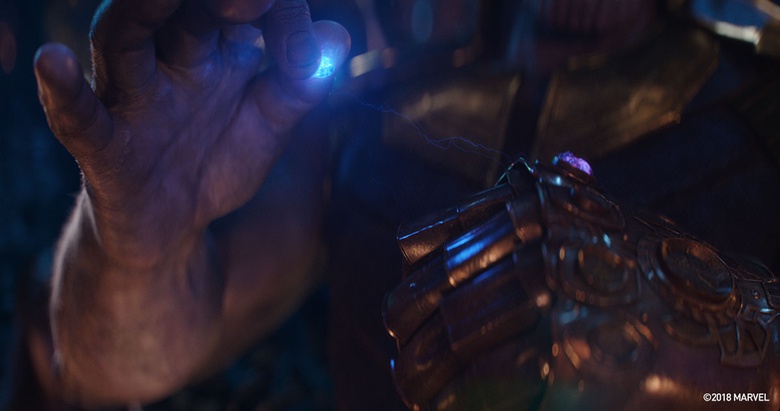 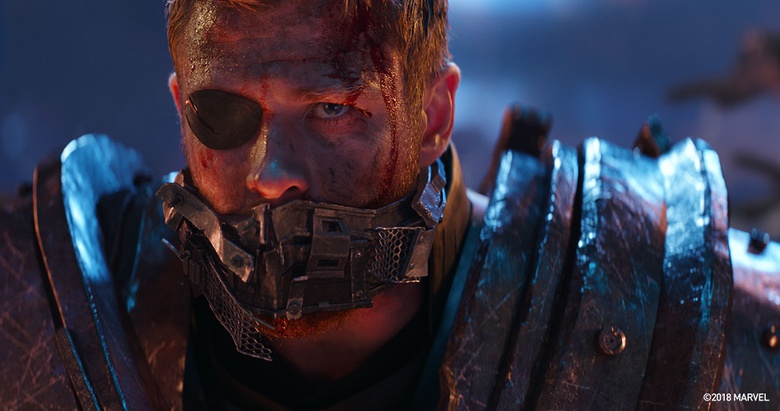 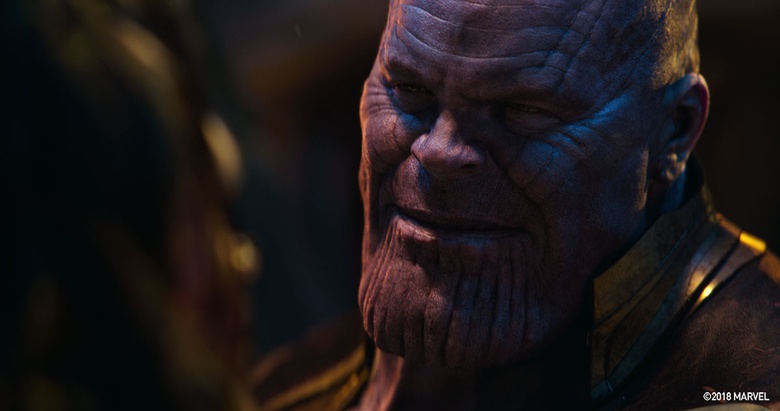 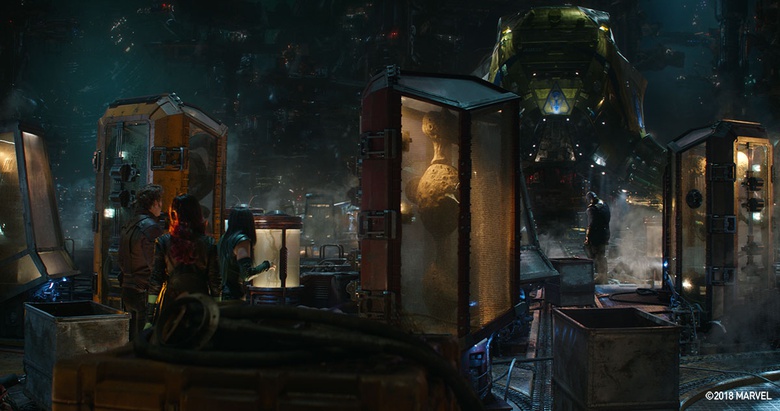 What emotion is being conveyed by Brolin? Is that same emotion being conveyed by Thanos? We did make an effort to get closer to Brolins facial relationship between his eyes, nose, and mouth but still keeping the spirit of the character of Thanos. Wed make an adjustment and feed that into the algorithm. It will give out a result that will be closer or need a correction.

Keyframe animation is required for the eyes because motion capture markers cannot be put on them or inside the mouth or on certain parts of the lips. You cant have the mouth doing one thing and the eyes doing another, notes Port. We ended up using some ray-tracing hardware rendering as we delivered the animation. It wasnt like Playblast. It had lighting, displacement, and looked good right off the bat. Lighting has a pivotal role influencing the signature purple skin of Thanos. The color of the skin is relative to what environment youre in.

The more complex lighting that Thanos had the more successful he looked. In certain sequences we have a warm highlight on him and a cooler light; the sweet spot in the middle resulted in the perfect purple. Muscles needed to be animated. After the animation is approved we look at it and see how the simulation works and tweak it if needed. The subsurface scattering was more orange than purple. It was this weird balance where you find what works best and what feels right. 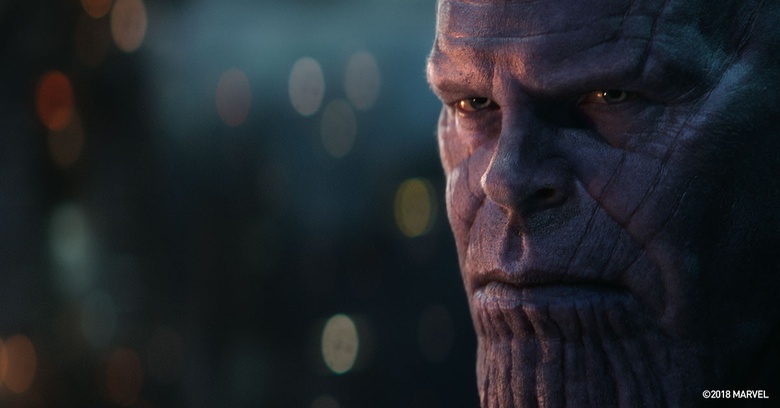 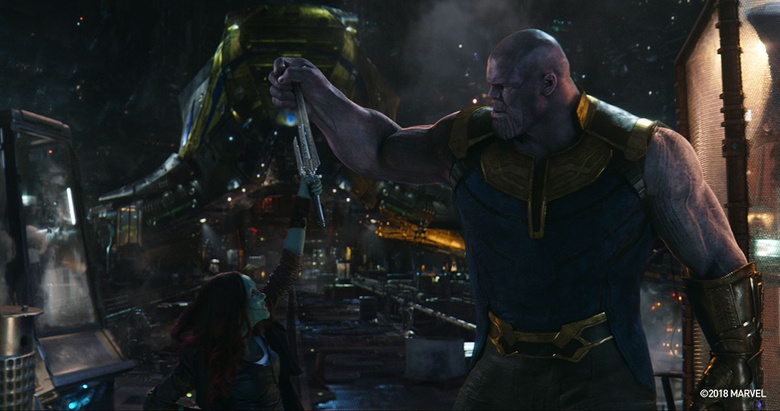 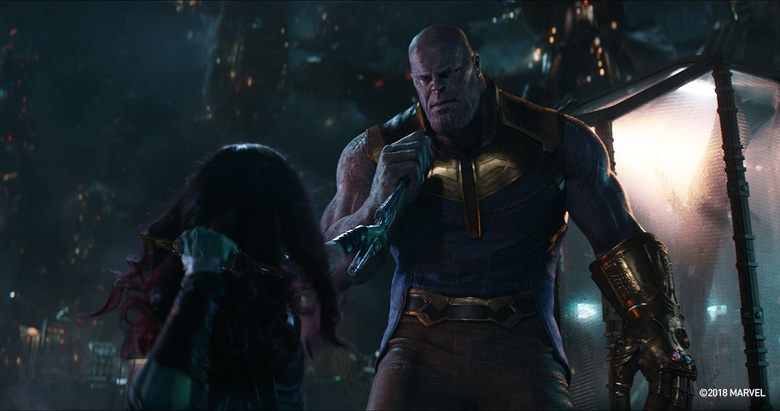 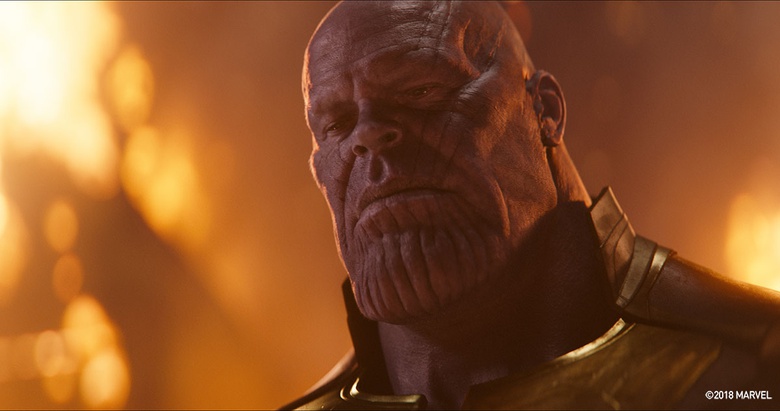 We definitely had body hair, like peach fuzz on his arms and stubble on his face, remarks Port. It helped with realism because when Thanos didnt have hair he didnt look right. The armor worn by Thanos was part of the concept design. Once that was approved we would build it in 3D and send it as part of the character for approval. The Infinity Gauntlet served as a light source. It would all be separate so if you wanted to boost the interactive light on the Gauntlet or on his face from the Power Stone that be done in compositing later. 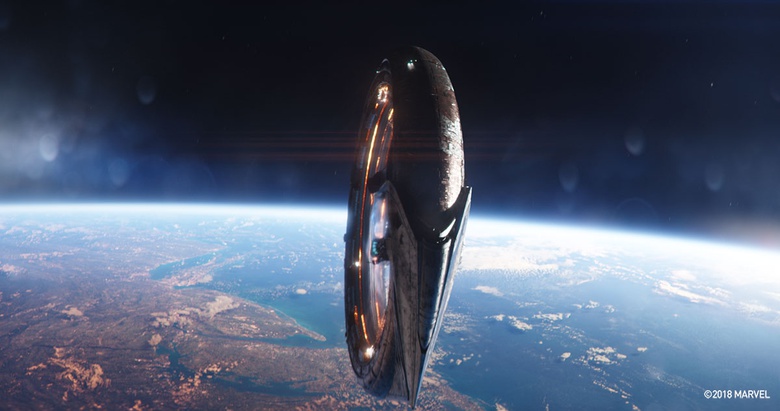 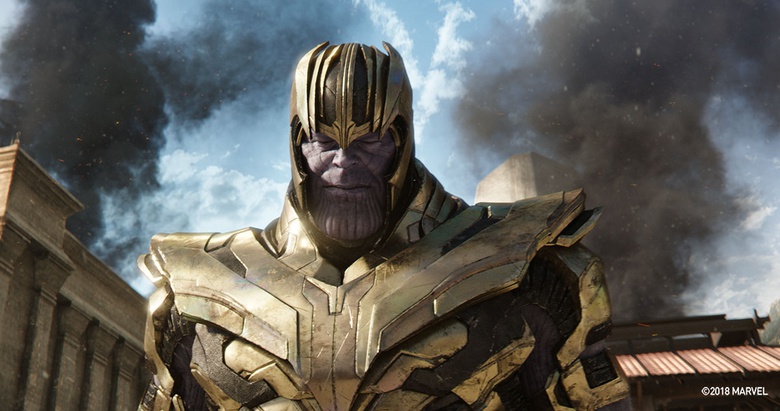 Thanos was not the only CG character as Digital Domain dealt with the Dark Order which was shared with other visual effects vendors like Framestore. Six characters needed to interact with each other and five of them were CG, explains Port. Theyre wearing their motion capture tracking suits and the helmet cameras. This enables the actors to be part of the set environment and for to interact with multiple other characters not doing it in a vacuum which is great.

The Dark Order were all lit by the same light sources. We would use compositing to do the final integration and to get it dialed in for the final. There was not the same amount of backend time which was allotted for Thanos. Fortunately, they didnt have a lot of dialogue. Because the shot came in late, Phil Cramer (Digital Domain Animation Supervisor) and his team had to keyframe animate it. 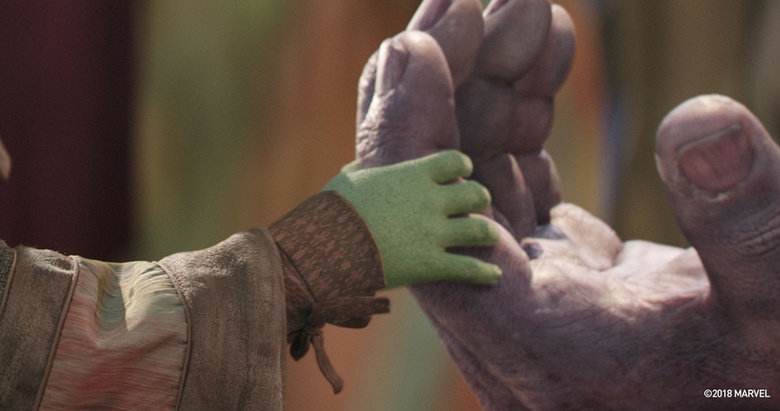 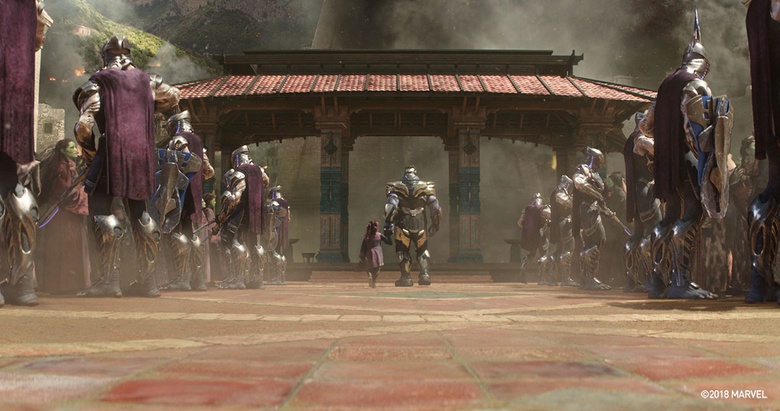 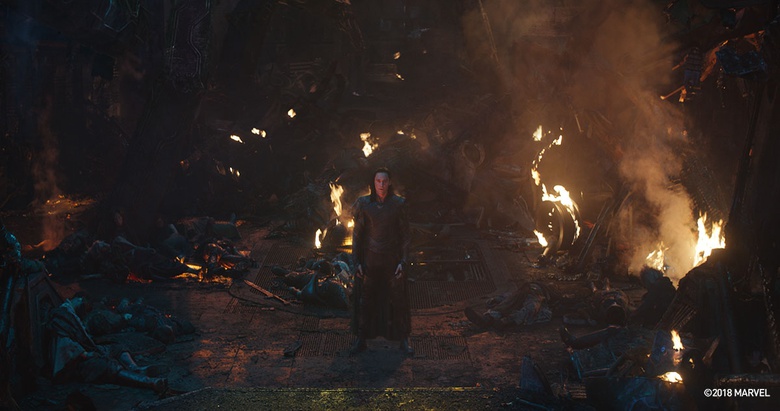 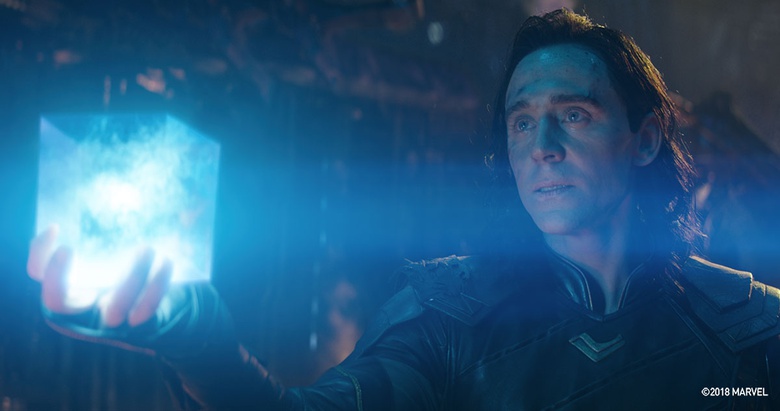 Lighting and modeling was handled in Maya, Houdini was used for effects like plasma, the snow environment, and clouds, and compositing was done in Nuke. A staff of 344 completed 24,968,539 frames which required 66,599,777 core hours to render. The biggest challenge was making sure that Josh Brolins performance came through and that Thanos looked as good as possible.

This is as cutting edge as it gets, notes Port who enjoyed creating a remote barren planet which is resting place of the Soul Stone. Vormir was a combination of plates shot in Brazil, Iceland, CG environments and sky plus a bunch of effects for snow and the cloud ceiling going into an inverted funnel, notes Port. That was a fun sequence to work on because it needed a lot of material from different departments. Its emotionally powerful.