A tailor-made action spy comedy conceived by comic book writers Mark Millar and David Gibbons which was adapted by filmmaker Matthew Vaughn (X-Men: First Class) gets a sequel with the release of Kingsman: The Golden Circle.

Assisting with the crazy antics of well-dressed English operatives and their American counterparts is Sony Pictures Imageworks VFX Supervisor Mark Breakspear who had to produce robotic dogs, an automated salon beautician, and a mechanical arm; go through a bag of weed into the jungle lair of the diabolical villainess, and blow-up Kingsman headquarters. It was a pleasure to be reunited with Production VFX Supervisor Angus Bickerton (Dark Shadows). Angus will previz where the crew is going to be so theyre out of shot, always has a B plan and doesnt get frustrated.

Bennie and the Jets

Elton John makes an appearance and the robot dogs are named after his song Bennie and The Jets. Jet was based on a German Shepherd and Bennie on a Boxer, explains Breakspear. Matthew had a good idea of the mechanical look that he wanted so we were able to build the physical dog quickly. The real challenge was in animation. Is it a robot dog or a dog that is a robot? The answer shifted over the course of the production to canine behavior as they were not menacing enough. Rigging was based on the motions of German Shepherds and Boxers which informed the positioning of all of the joints, rib cages, body masses and head shapes. The modeling team looked at the muscular components of the dogs to build mechanical objects that fit within the volumes of the muscle shapes.

Sony Pictures Imageworks had recently rewritten the shader pipeline for metallic and hard materials which provided Breakspear an opportunity to test the upgrade. The metallic objects have surface textures alluding to how they were built which adds to their photorealism instead of relying on oil and grime to hide the fact that theyre CG. There was a lot of work focused on making dogs not robotically precise. When Jet is chasing Harry Hart [Colin Firth] down the bowling alley her feet are skidding and leaving scratches on the ground. A high and low HDRI were taken for every shot so to extrapolate all of the positions of the lights in the space. Because of that when these dogs are running down the bowling alley the HDRI covers them for the whole area.

Supermodel Claudia Schiffer, who happens to be married to Matthew Vaughn, was the inspiration for the Beauty Bot. Claudia had a huge part to play in signing off on the initial body shape which happened quickly and spent a lot a time with us working on the look of the face. We scanned her face and our modelers adjusted Beauty Bot to completely conform to the way her nose, cheeks and area under her nose are shaped. Beauty Bot was always the most beautiful robot that did the most horrible things without any emotion. Even her final scene when she comes out with a rocket launcher the face is stoic. Beauty Bot glides from pose to pose which were based on the motion of Claudia Schiffer. Claudia had a say on the colors but with the material choices it was always clear that she was going to be like an iPod. Beauty Bot has a polycarbonate outer shell, reflective, shiny, clear and clean because she is a beautician. We werent trying to show metallic moving parts.

A grey sleeve was worn on the right arm of Edward Holcroft which was digitally replaced with a mechanical one. When we tracked the CG arm to the body of Charlie Hesketh [Holcroft], the muscles in his torso still looked like they were reacting to the one that was no longer doing anything and not the arm that was, reveals Breakspear. Early on we realized that a CG torso also needed to be built and it had to react to the CG arm. We kept the face in those shots. Visually it was treated that the same scientists and engineers who made the robot dogs were responsible for the mechanical arm upgrade. It was about making an arm with pistons that could move and be believable and still have the functionality of having the hand fly off to grab things and fly back with an internal cable.

With a month to go it was decided to transition from a bag of weed to a sweeping shot of the jungle that leads to the dwelling of Poppy Adams (Julianne Moore), the head of the worlds largest drug cartel. We took the camera move, rebuilt the whole shot in CG, re-projected it to get closer to the bag, then flew through the surface of the bag and into the weed, reveals Breakspear. We replaced all of the tea leaves with CG weed. The weed buds were approximately placed in the same position of the trees in our full CG jungle. Then we scaled the two together and built two compound camera moves. A small version of the massive move over the main jungle and built an equivalent version over the weed; the two for a brief period of time lineup and at that point we do a clever dissolve.

Machu Picchu in South America inspired the shape of the jungle while the trees and vegetation were based on those found in Vietnam. We built basic tree models and from there put them into some software that we have created at Imageworks called Sprout and that allows you to paint environments, explains Breakspear. In the most artistic way you could find a rockface, and paint your trees clinging to it. You can paint moss coming off of the trees or hanging ferns. You can work with it in full render in real-time, see all of those details, get it looking right fully lit, and then send it over to animation or layout. CG aerial photography of the jungle links up with a cable cam shot of a Poppyland partial set constructed at Longcross Studios in London of the main street with some façades running down it to the diner. Reprojections through compositing and simplifying of camera moves enabled tracking between the different plates that concludes inside the diner. Drones were flown above and alongside the set to photo model and get textures from every angle for the CG version.

We knew from the previous movie that the building rested on top of a huge cavernous base which was Kingsman HQ, remarks Breakspear. The bomb comes in, hits the ground in front of the building, and underneath a nuclear explosion sends a shockwave that causes the windows to blowout, and then the whole thing starts to implode. We went through a lot of trouble to make sure that the building itself was constructed inside and outside correctly in CG. Underneath we built a huge cavern that you never actually see with different floors and structure so as it collapses you see it pancaking and the trees were rigged so the roots break and branches sway. The whole thing falls apart. We looked at how turf comes apart during earthquakes. Setting up those simulations was a lot of work. 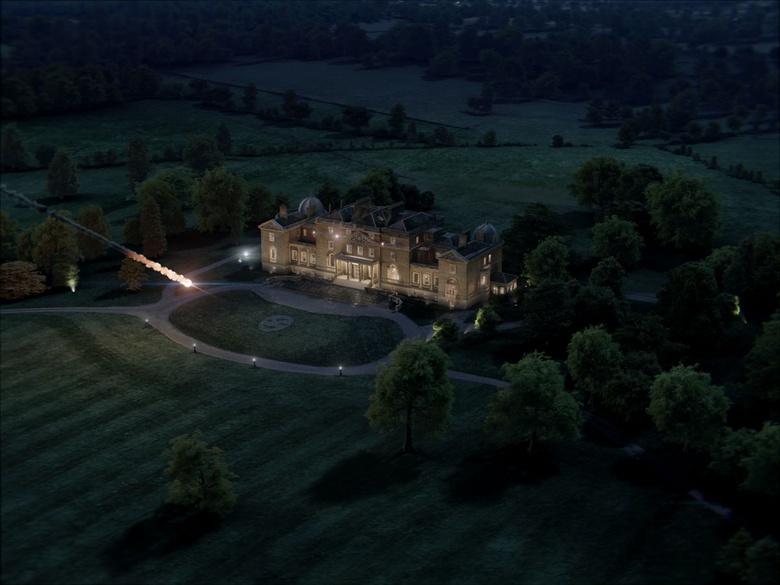 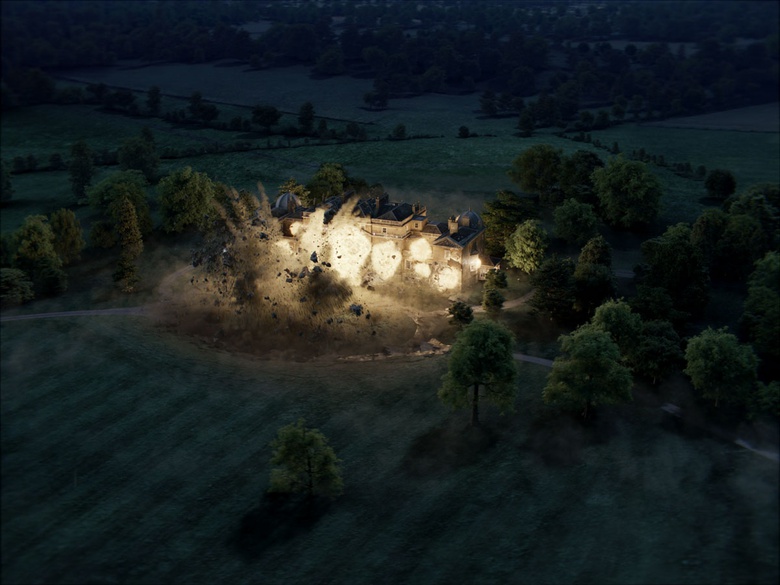 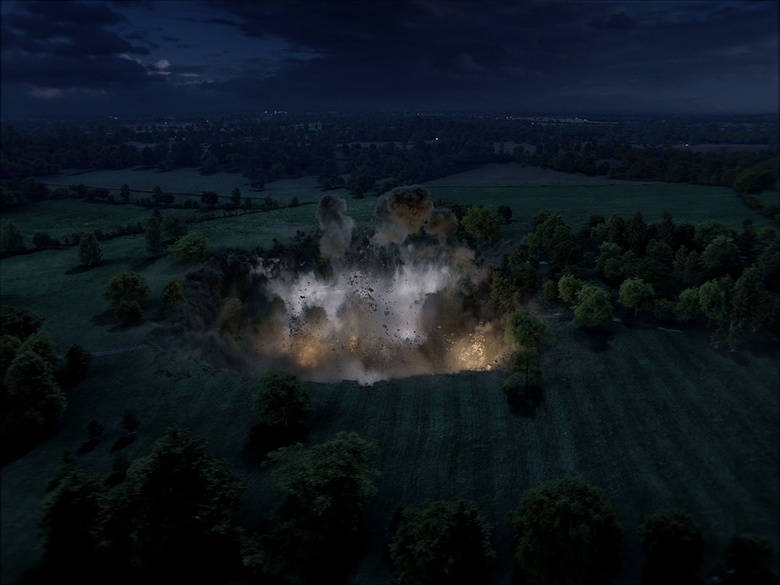 A four-minute fight sequence that takes place over a briefcase consisted of 200 plates, face replacements, CG environments, CG props and lots of painting out of crew and wires. The stunt team with Matthew blockedout how they wanted the fight to take place, remarks Breakspear. Then the stunt team along with the second unit blocked out how the camera would move around and filmed test plates. The stunt team wanted to put those plates together to make sure they could do everything safely and ended up with a rough version of the sequence in After Effects which became our base template that we worked on. Three months was spent to create the illusion of a continuous shot. You would track a shot, get a 3D position of that track and with some clever algorithms you would replot the camera in a way that would keep the same camera move, simplify it, get rid of some of the noise of that camera move, and then re-project stuff so that you could literally smooth out the movie or connect to the next shot by moving the camera in 3D space slightly differently; thats what we did to join most of those shots together.

Angus Bickerton modified a face replacement technique used in Bollywood movies. Instead of filming a face in 2D, re-projecting it in 3D and then putting it onto the person, Angus setup a seven or eight camera rig placed in different angles around a person, explains Breakspear. He filmed that, and they were all synced together so in the fast pace action of the fight you can go from one camera to the next and it gives you 3D. It worked incredibly well. It was a cheaper version of doing a full CG head. But the benefit of that is you get real lighting, dont get any weird stretching, and it looks a hundred percent real. If you watch the original plates before we did any face replacements you would realize that Eggsy [Taron Egerton], Jack [Pedro Pascal] and Harry werent doing any of that.

There were two big things for Sony Pictures Imageworks that enabled the facility to complete the work on Kingsman: The Golden Circle. We upgraded our shaders and materials library so we had a state of the art look and feel to the robots, notes Mark Breakspear. The other was our development team worked on and created Sprout which was instrumental in making the jungle. We thought the hardest part of the movie going into it was going to be the jungle because The Jungle Book had just come out. Because of Sprout no one ever questioned or had notes on the jungle. It was great from day one. Breakspear has two pinnacle moments. The weed bag transition was a lot of fun and when the transition happens people are not thinking about it. The other one is when Jack goes into the mincer at the end. You see his leg spin opposite to his other leg so you realize its disconnected to the rest of his body.