Damir G Martin challenged himself to a dragon design marathon, creating 55 dragons in 28 days. He shares the workflow he adopted for this speed sculpting quest...

Damir G Martin challenged himself to a dragon design marathon, creating 55 dragons in 28 days. He shares the workflow he adopted for this speed sculpting quest... 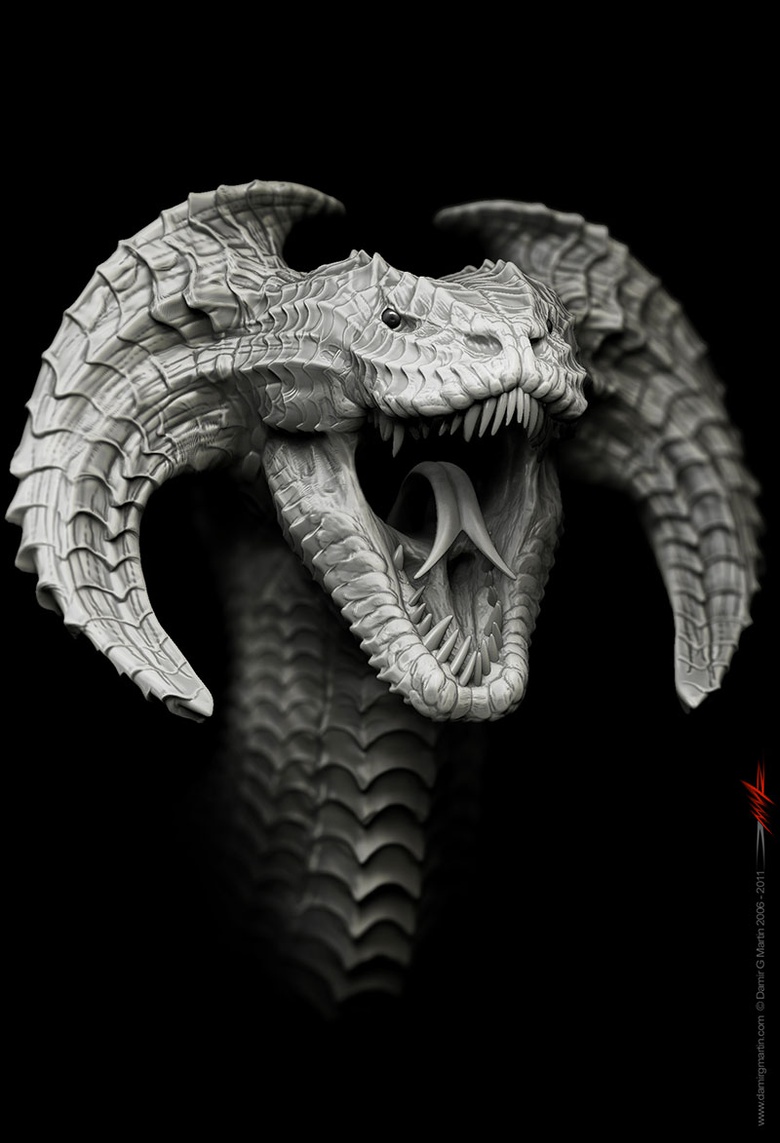 55 Dragon Design Marathon was a personal challenge I put to myself. It was a timed challenge where I had to complete 55 dragon busts within the 28 days of February 2011. The idea was to create 55 unique designs using various approaches during the process. I tried to move away from my comfort zone and explore different tools inside ZBrush.

Most of the designs took two to three hours per dragon and the challenge was public in the sense that Id announced it online and made posts and updates daily as I was making these busts. This was a positive element of the challenge because the interaction with people made it more fun, motivating me throughout the entire duration of the challenge.

I really got used to 3D sketching when ZBrush came to the scene. As it became better and more tweaked to suit the needs of an artist the 3D sketching became even more enjoyable for me. There are couple advantages I see about 3D digital sketching over any other sketching approach. The speed and simplicity ZBrush provides in digital sculpting alone are highly beneficial features. These two elements are very valuable for me. You can literally sculpt in front of your client, respond to his comments, directions and visions in real time because of the speed you are able to utilize in the creation process. Another great thing is, when youre done sketching, you have a base set for the next step. You move through the production stages faster. 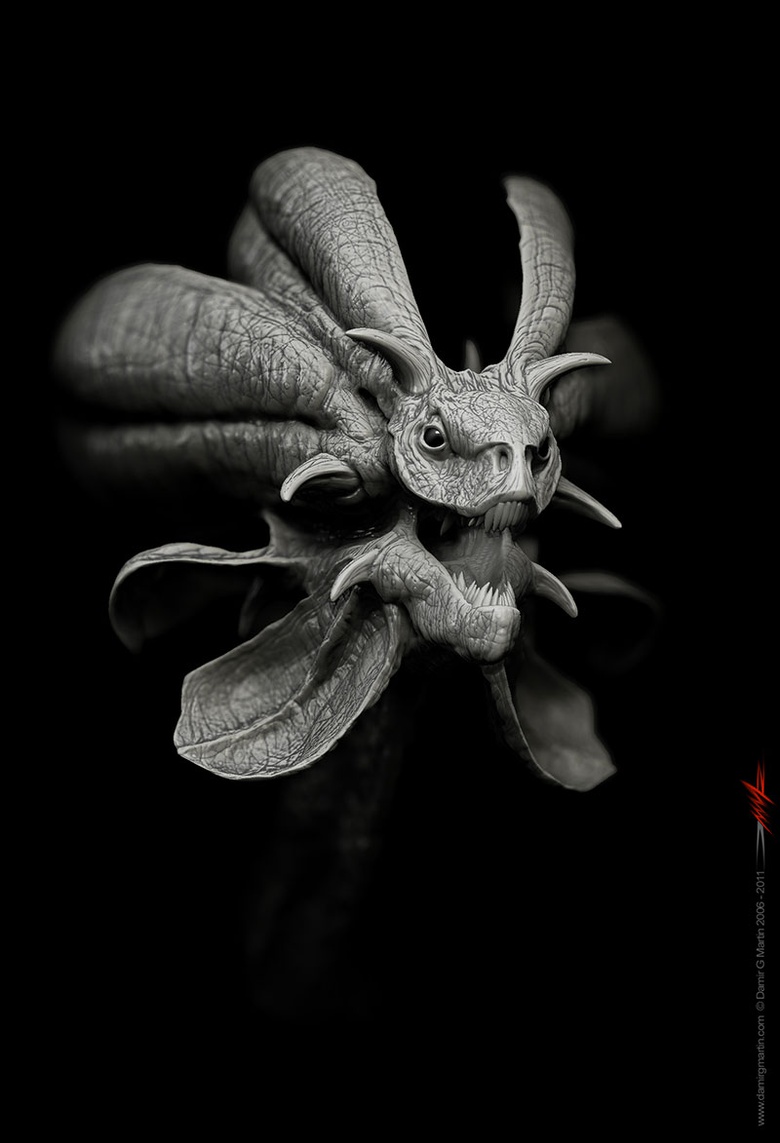 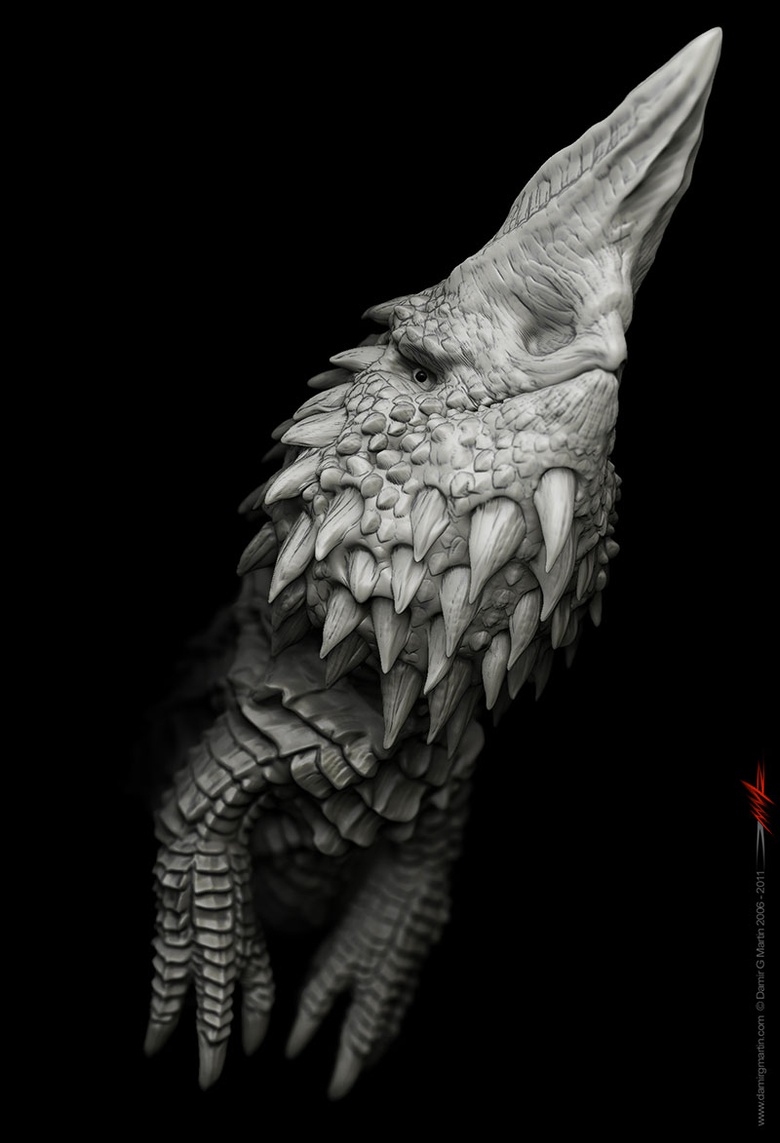 Fig.01 - This miniature dragon is inspired by a mimicry, praying mantis-style design. The appendages on the back of its head should be colored brightly and vividly to make it appear like some sort of flower or orchid © Damir G Martin

Fig.02 - This design is a mole-inspired dragon that borrows its shape from a drill bit so it can cut its way through the ground by spinning. The design tells a story or shows functionality © Damir G Martin 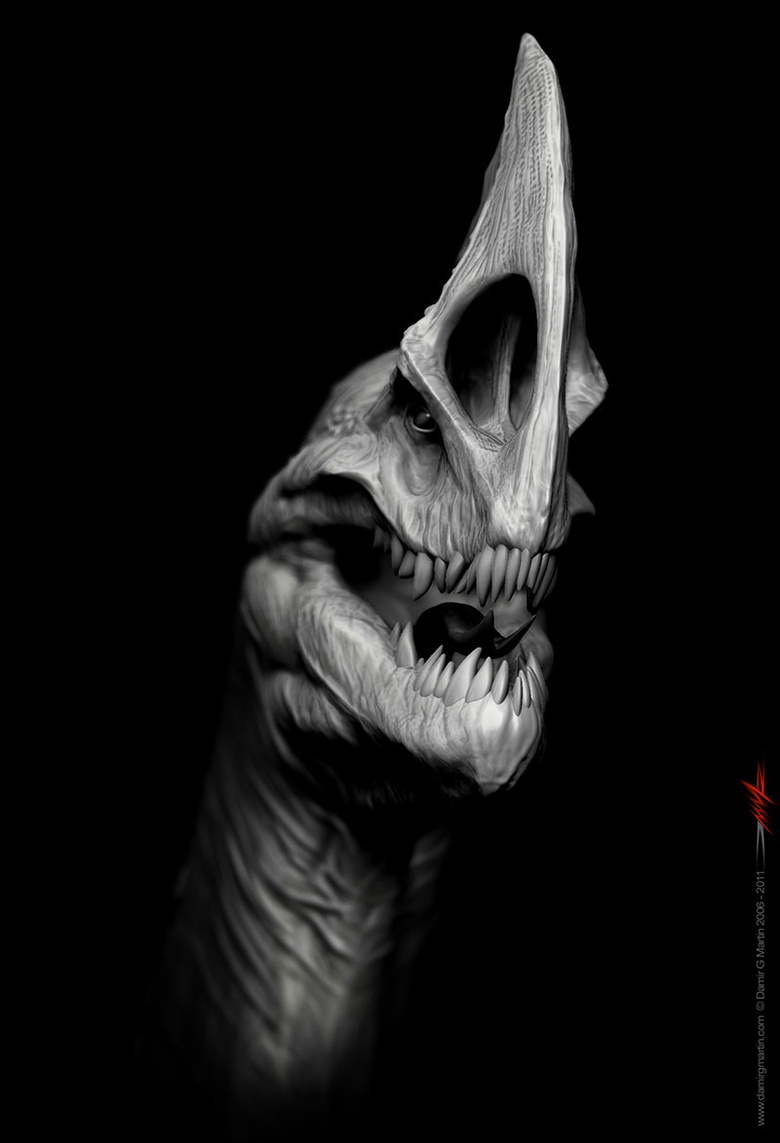 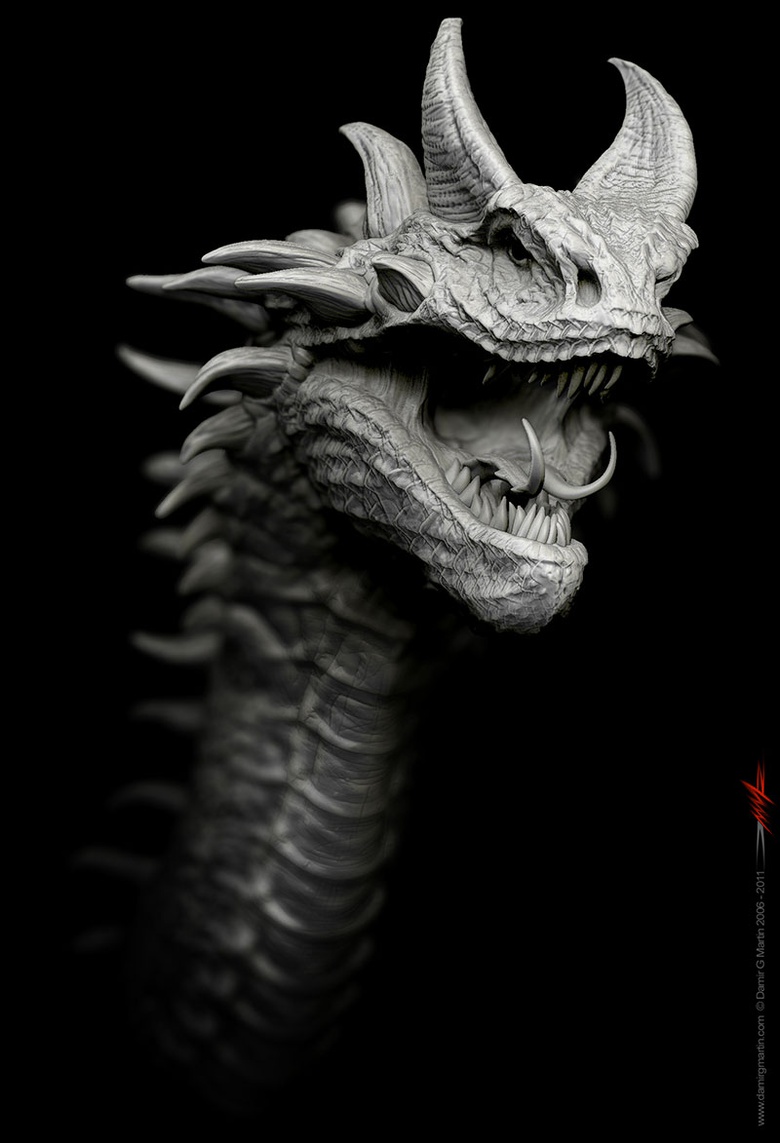 Fig.03 - This dragon sketch was inspired by a rhino skull © Damir G Martin

Fig.04 - This one borrows its shape from cobra-type snakes, the Sahara horned viper and Naga, the serpent deities in Hindu and Buddhist mythology © Damir G Martin

My inspiration comes from all around me, I suppose from nature, from technology, from other artists and their interpretation of the world around us. All these fire up my brain in different ways but with the same result - me becoming inspired. I guess my 3D exploration of a design doesnt differ that much from any other artist out there. It could be described as a fluid, dynamic and constant chase for the right shapes and that you end up having when you hit the imagined marks youve put in front of yourself. 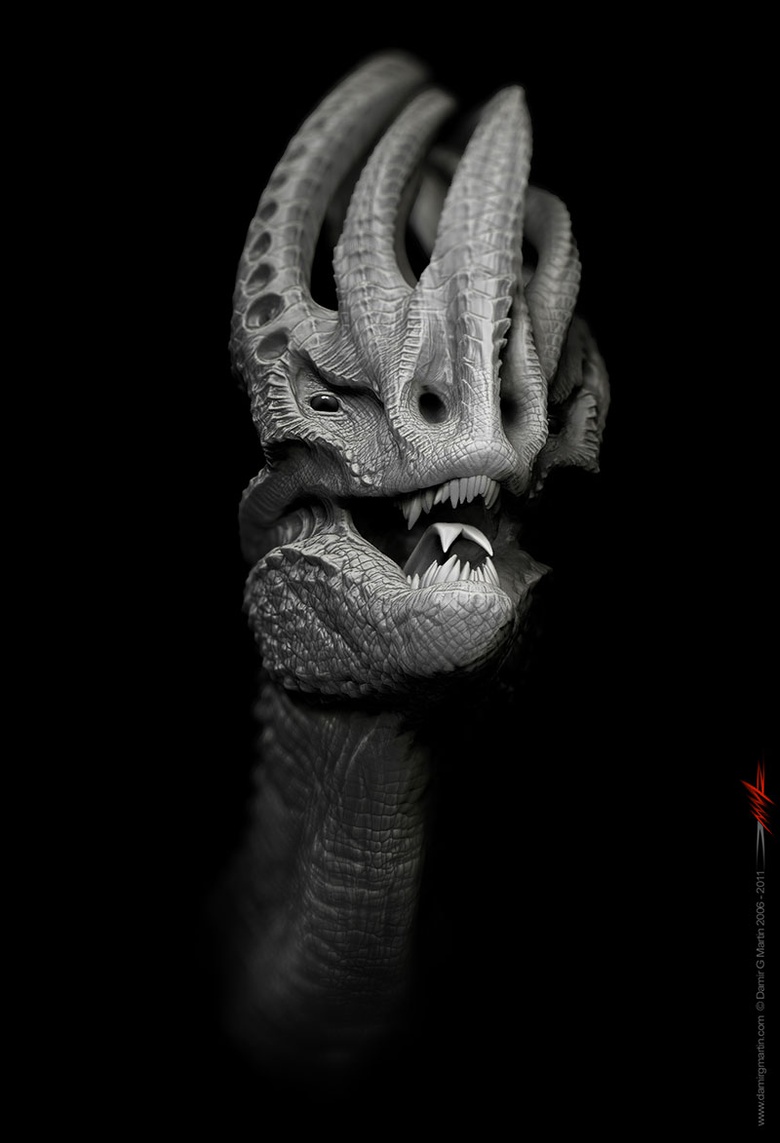 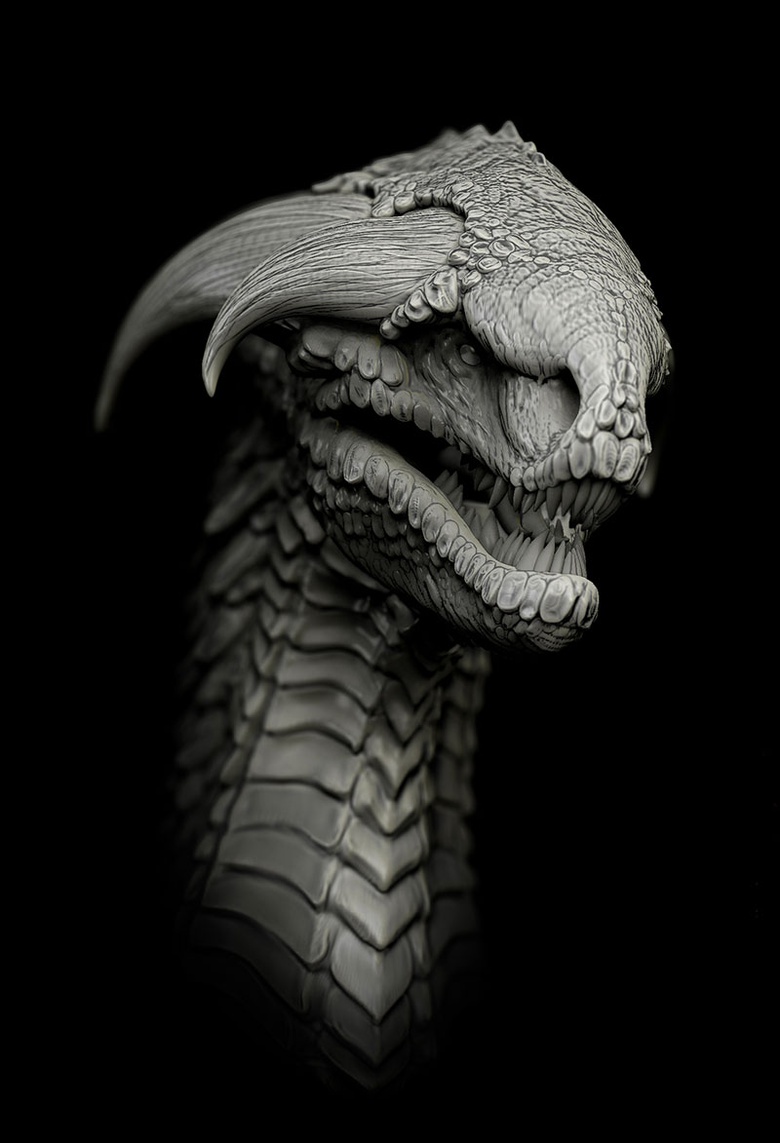 Fig.05 - This design was a mere asymmetry practice, with no real functionality or greater depth behind it © Damir G Martin

Fig.06 - This one is one of the first dragons made for the series. The neck is covered with large sets of scales made with the Track brush and a custom alpha © Damir G Martin

For the purpose of digital sculpting, I use ZBrush only, for the known reasons like the speed and simplicity it gives to an artist. In addition, I also use Photoshop to maybe tweak and improve my 3D sketches.

Sometimes I go back and forth from ZBrush to Photoshop because I find it easier to solve certain design obstacles using a 2D approach before I go back to 3D again. Sometimes a steady and a fixed point of view of the model rendered in 2D makes things easier. Your mind doesnt get distracted with the three-dimensionality and you can focus on a problematic part of the model and deal with it much more efficiently. 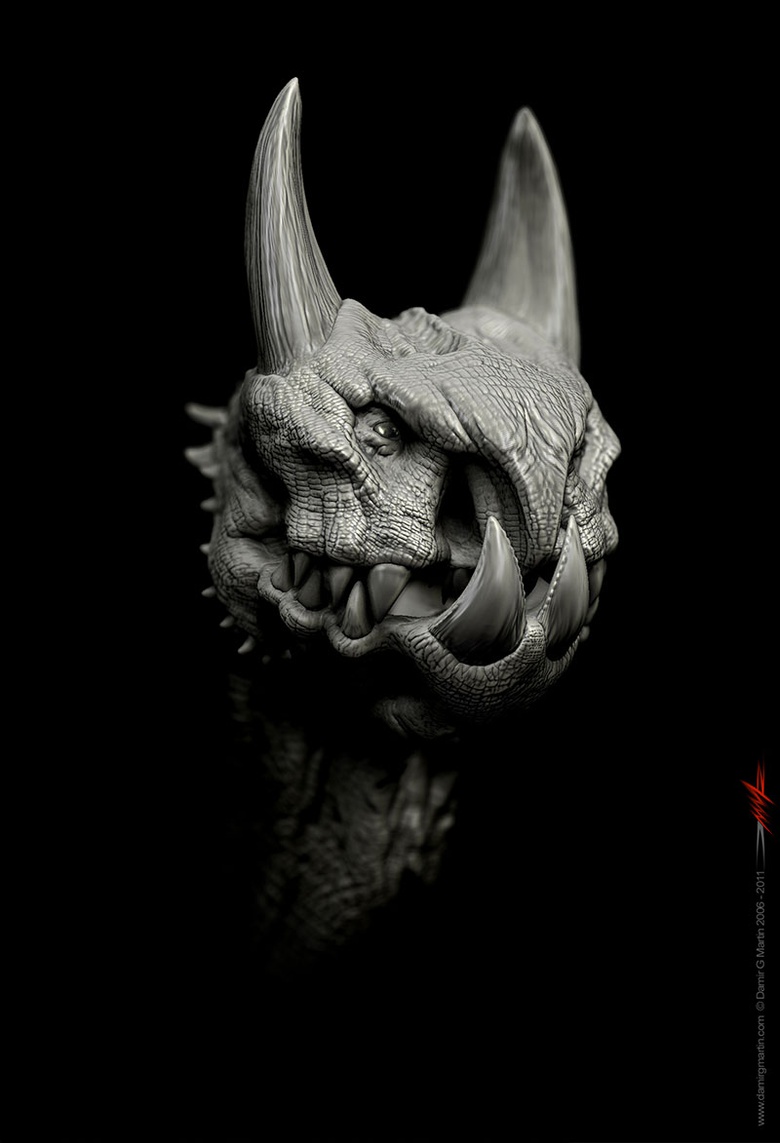 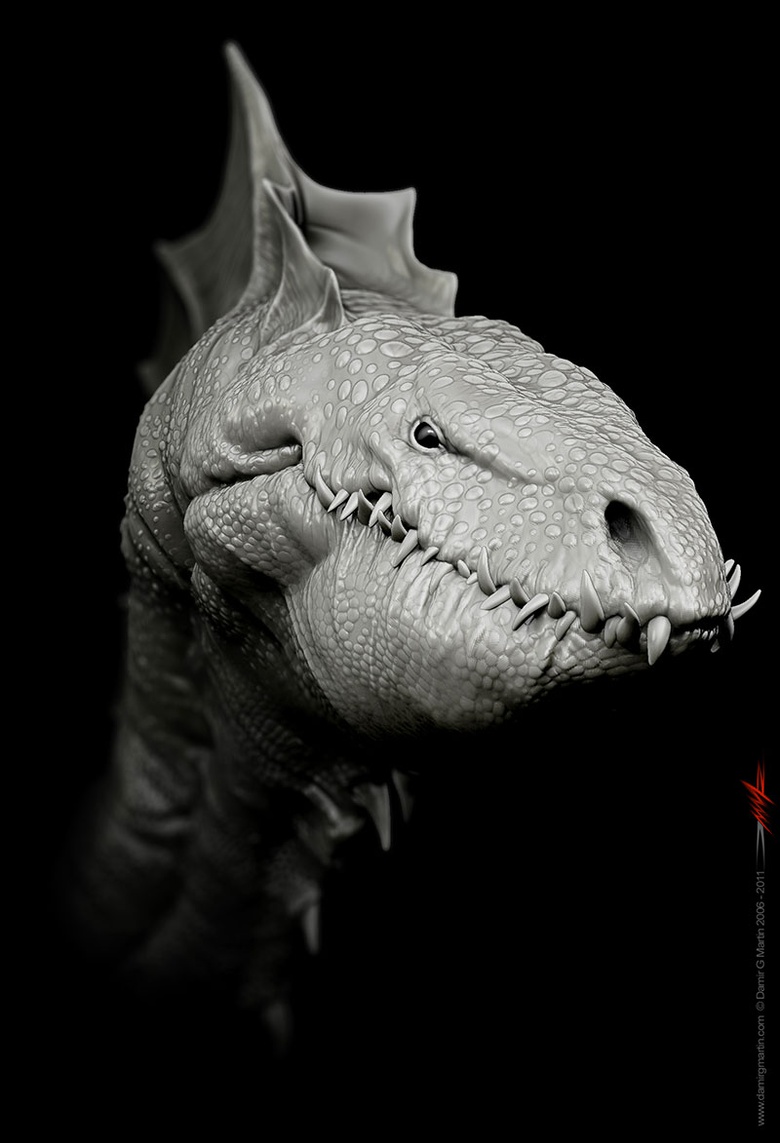 Fig.07 - This bust was inspired by a bat-like creature and a pit bull dog © Damir G Martin

Fig.08 - This one bears a more classical dragon appearance and was mostly inspired by a Komodo dragon lizard © Damir G Martin

During this 55 Dragon Design Marathon I used two approaches while sketching. I used ZSpheres only and then the ZSketch feature. At the time, ZBrush did not have Shadowbox, DynaMesh or many of the other features it has today. Since these were sketches only, the two methods mentioned above worked perfectly for me.

During the detailing phase I used various brushes and approaches as well. On one bust I would use hand-drawn masks to pull out details from the surface. On other occasions I would use the Track brush and combine it with the ClayTubes brush or Standard brush. 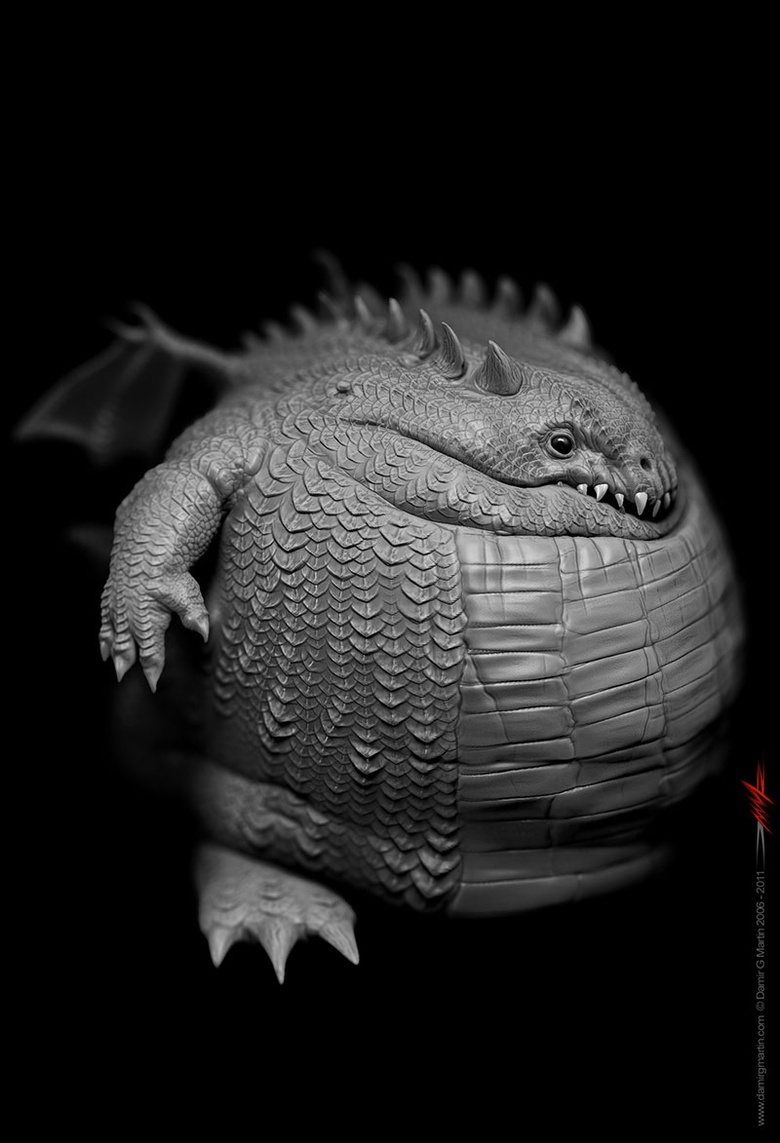 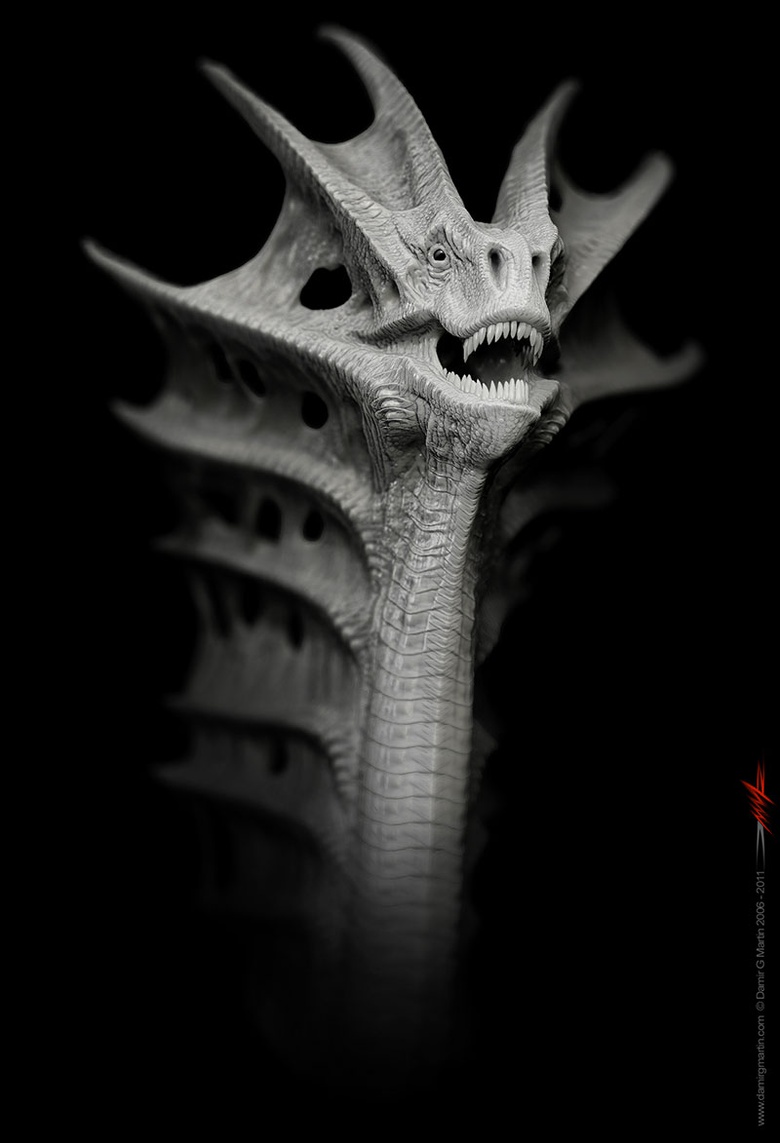 Fig.09 - This one began as a humorous approach but ended up as a functional beanbag design. Imagine having these guys made as bean bags and you could flip the head up as a back rest and sit on it, or even open its jaws and sort of sit in its mouth that would be a top seller furniture piece! © Damir G Martin

Fig.10 - This bust represents a sea serpent type of dragon an amphibian dragon with a snake-like body © Damir G Martin

I was constantly trying to move away from tried methods that I felt comfortable with and attempted to do certain thing with new tools, new brushes. All that with one thing in my mind improvement; whether to become faster in sculpting, to develop my design skills further or to learn how to use ZBrush more efficiently. I would encourage anyone to try and do something like this at least once. Put a challenge in front of yourself, set some ground rules, like a time frame, tools, high or low quality or the quantity, and start sculpting. You will be amazed at the results and maybe even opportunities that can arise from something like this.

Looking back at the project, three years later, I have numerous ideas on how to improve some of these ideas and make a couple of different designs out of the sketches. This was one of the goals of the design marathon though - to produce basic designs that could be expanded and built upon later. 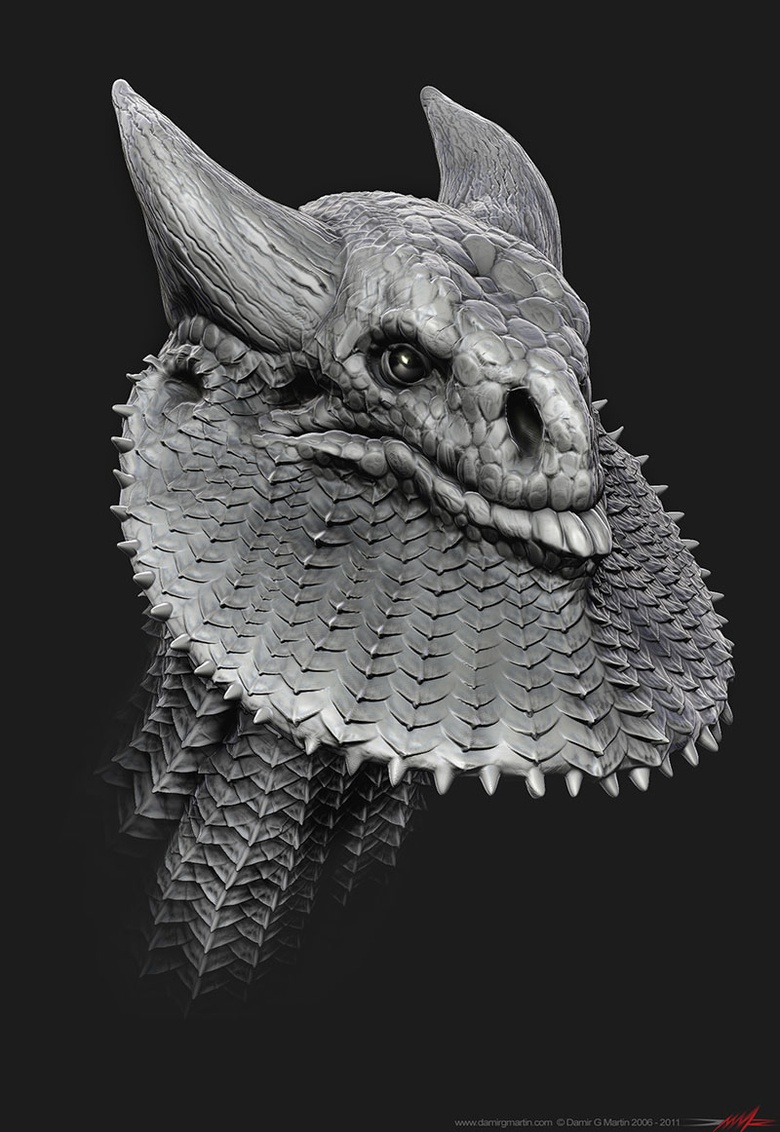 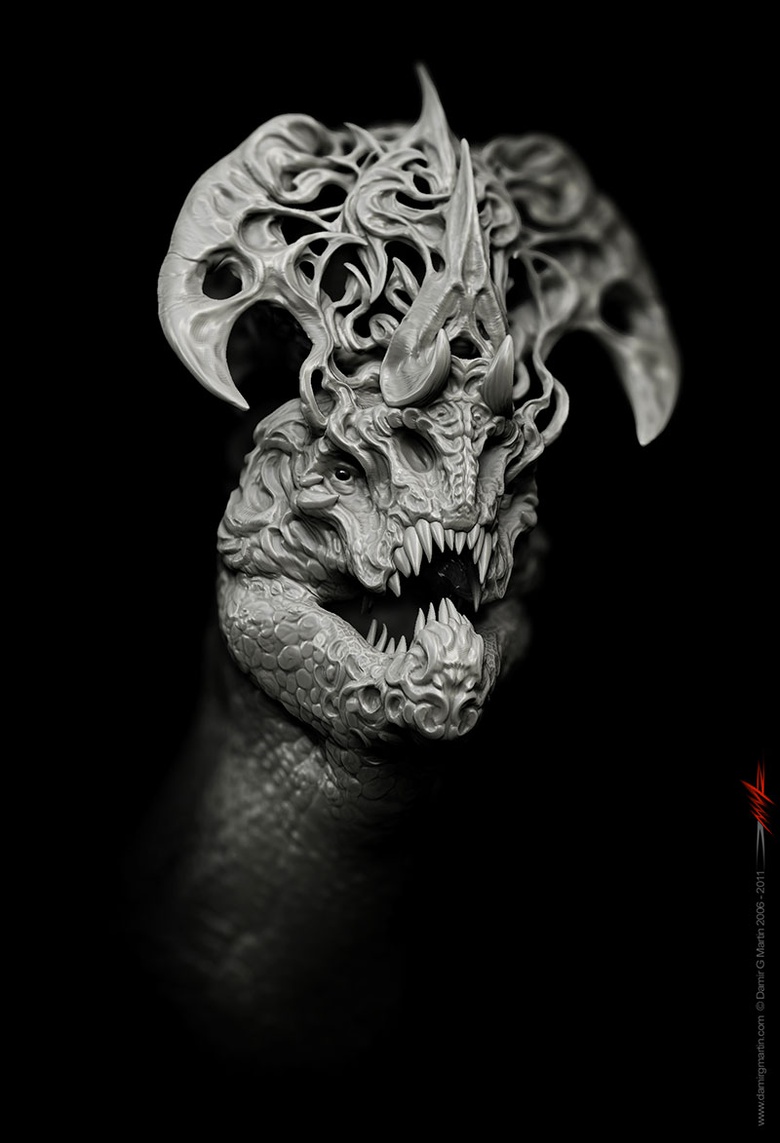 Fig.11 - This bust was inspired by my own pet Australian Bearded Dragon. I love that beasty and it is a constant source of inspiration for me. Reptiles in general are too, but my boy Grujo before anything © Damir G Martin

Fig.12 - This originated as a brutish dragon with an intricate horn structure. The story evolved that an evil wizard entrapped the princess in the interlocking structure on the dragons head. The inspiration and story grew from the sketch, which can be the sign of a great design © Damir G Martin 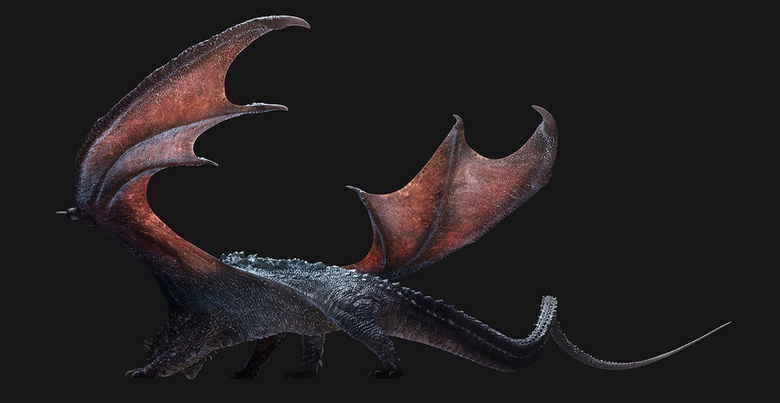 This is a shaded and lit dragon model that was expanded from the dragon 24 bust, modeled for the Ixor VFX studio located in Greece © Damir G Martin