All imagery supplied by Scanline and Warner Brothers

For those wondering which is stronger, a giant gorilla or an enormous lizard, the Warner Bros’ MonsterVerse attempts to answer the question with Godzilla vs. Kong directed by Adam Wingard (The Guest). One of the major vendors recruited by Visual Effects Supervisor John ‘DJ’ Des Jardin (Watchmen) was Scanline VFX which delivered 390 shots across 17 sequences. 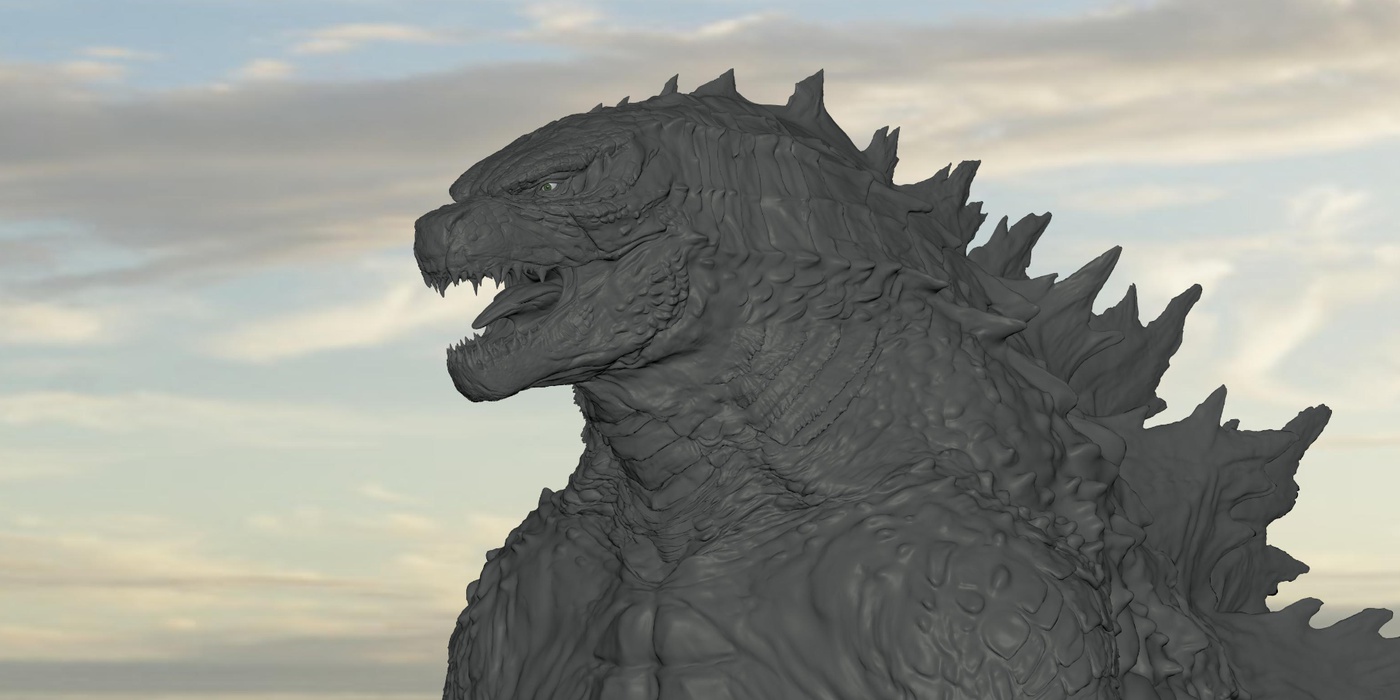 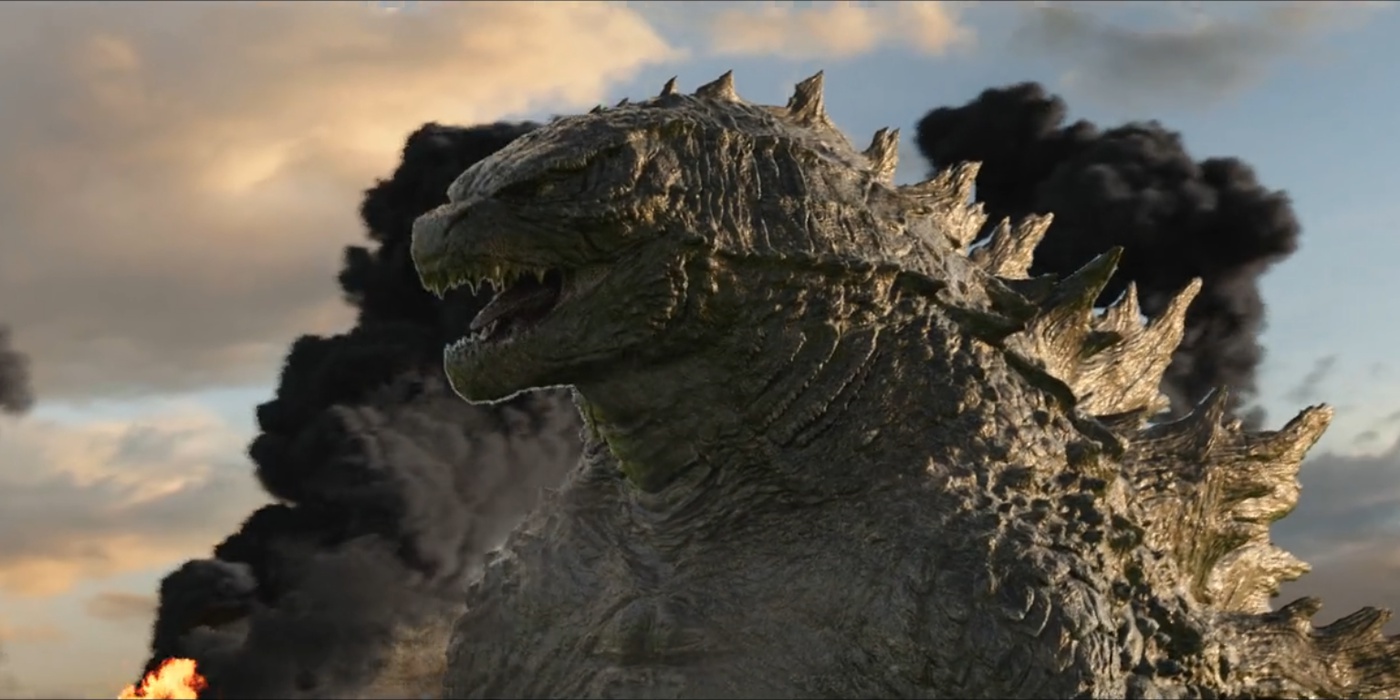 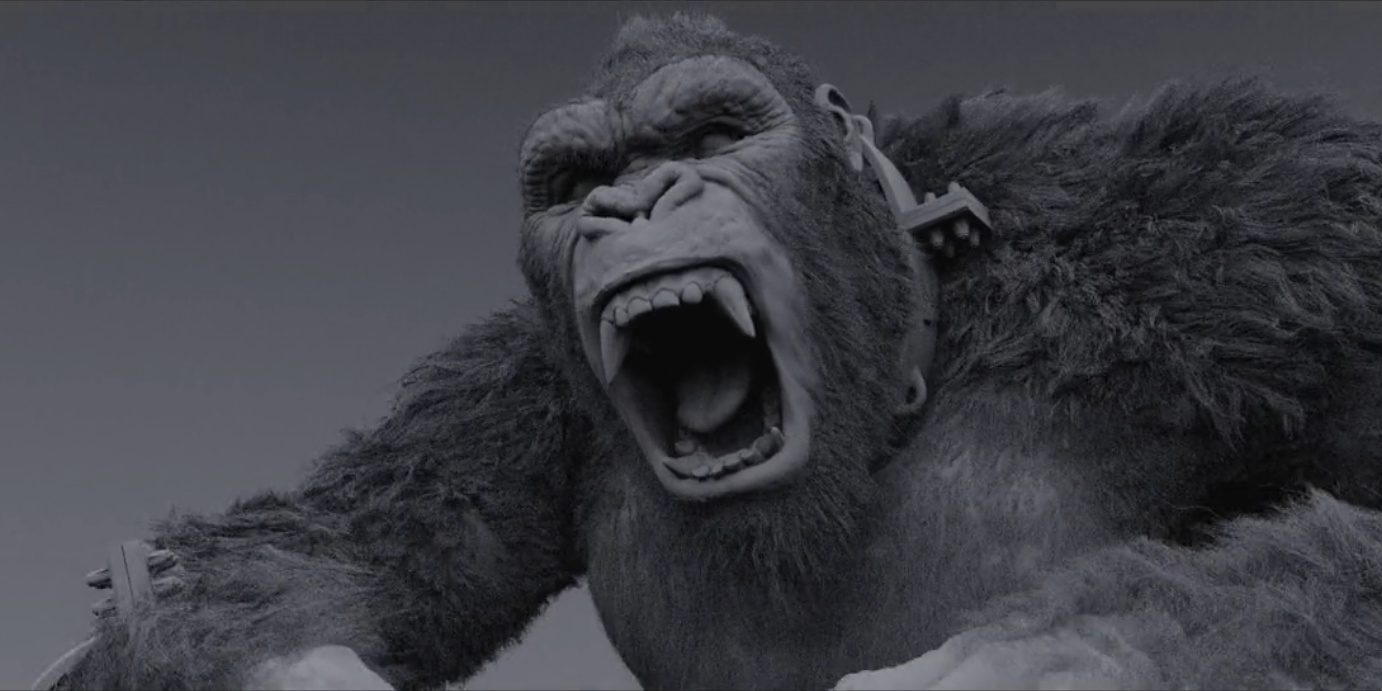 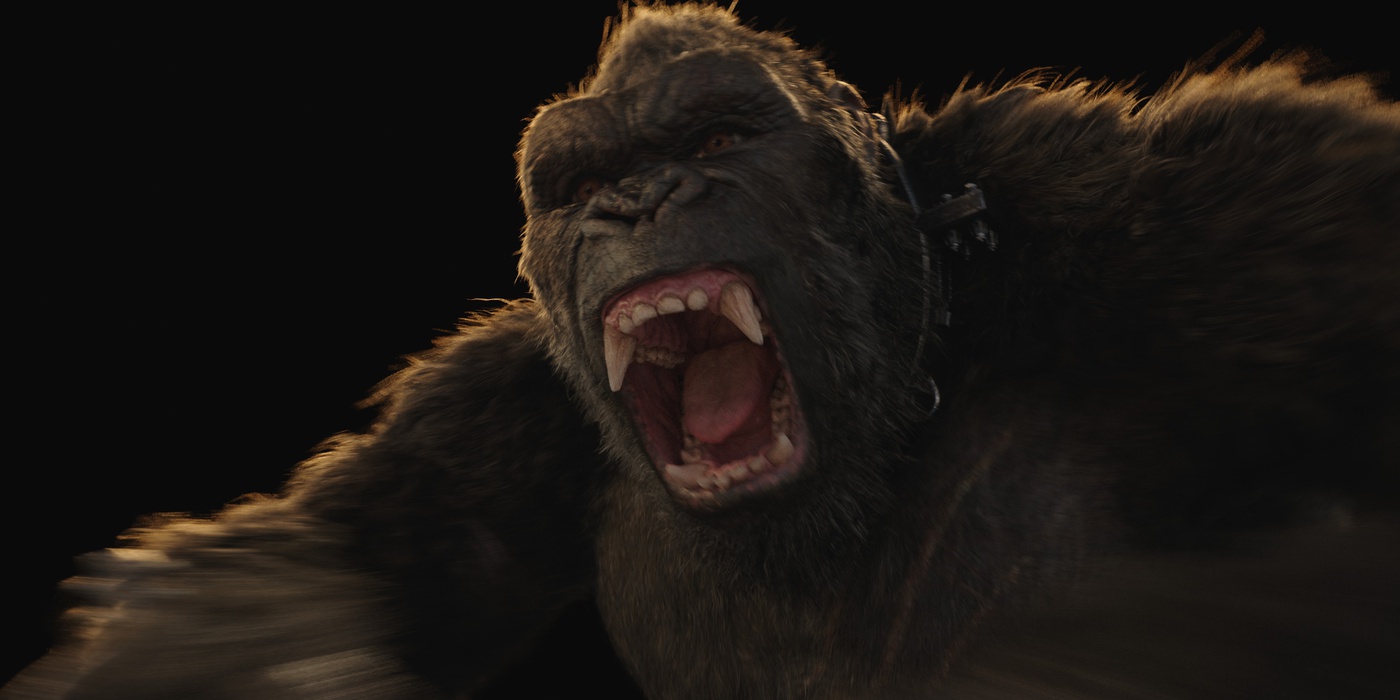 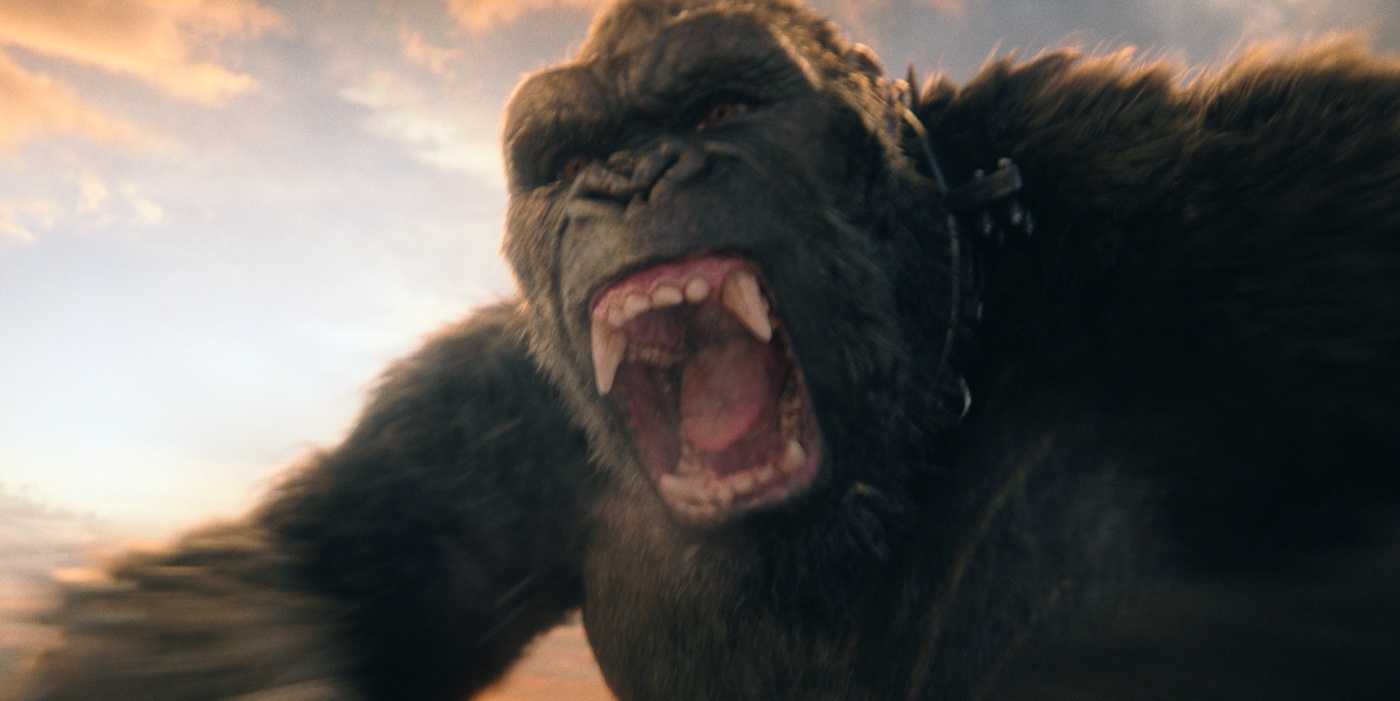 Getting to take part in a rematch between two titans that has been 59 years in the making was a personal joy for Scanline VFX Supervisor Bryan Hirota. “The original King Kong vs. Godzilla film used to be on TV quite a bit when I was a kid. The fact that I got a chance to be a part of redoing it was exciting for me. The design of Godzilla was not changed from Godzilla: King of the Monsters, though we did give him a circulatory system. When Mechagodzilla punches Godzilla, it causes a blue genetic energy so you see silhouettes of the vascular system or ribcage or other bones.”

Fine detail was added for close-up shots such as barnacles to the fins. You could do a little bit with his brow, snarl his lizard lips, and bare his teeth, but Godzilla has a fairly limited emotional range compared to the monkey. You could make him look mad or really mad. I don’t know if we could make him look particularly happy! His arms are bigger than you would expect but small for his body.” 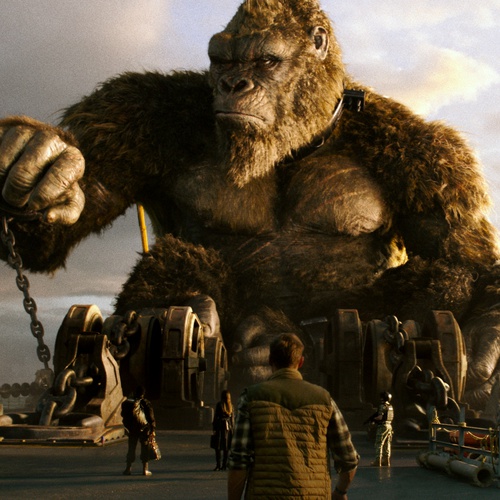 Kong is substantially bigger than in Kong: Skull Island to make him a more imposing and formidable opponent to Godzilla. “We kept calling him ‘Old Man Kong’,” chuckles Hirota. “He is overweight, still strong, and has the little beard, Mohawk, and some grey. As we aged him up, it was important to keep the characteristics from Skull Island. We didn’t change the facial structure too much. We loosened up his skin a little bit and added some wrinkles to it. We kept all of the damage that Kong got from fighting with the monster squid and Skull Crawler.” “A couple of additional scars were added as we imagined over the decades that he had other battles with creatures and got wounded.”

A procedural fat jiggle rig was created within Maya for Kong which was combined with Ziva’s FEM Solver for shots requiring fine muscle and tissue details. “That was another key to help sell Kong’s personality and mass. His muscles jiggle and flex less when he is raging as opposed to cruising around relaxed.” 6,358,381 hairs were simulated for each shot featuring Kong. “We got some reference of wind blowing across wheatfields creating interesting patterns from DJ. He thought it would help sell the scale of Kong lying there as the wind from the ocean is blowing over him.”

The eye model for Kong was rebuilt. “We tried to anatomically create an eye model that was as physically accurate as possible by dealing with the shape of the cornea, the iris, and caruncle; they existed as physically plausible geometry and shaders versus trying to fake the look of the eye with some pre-painted texture maps.” Scanline Animation Supervisor Eric Petey would act with facial markers. “We would feed that footage into our Faceware tracking software. A human face is not going to exactly behave how we wanted for Kong’s face because the structure of the lips is different. Through machine learning we could refine the targeting to make it better for translating the human performance into Kong’s performance.”

A mechanical beast that becomes sentient serves as the major adversary and has a particular hatred for Godzilla. “The art department had a design that Legendary and Toho approved which got turned over to us for Mechagodzilla,” explains Hirota. “He looks like a metal skeletal version of Godzilla. Our first job was to go through and make it physically possible for Mechagodzilla to move around. We redesigned all of the joints. Panels slide out of the way and little pistons move things around to prevent any metal bashing into itself.”

“We added a bunch of different detail into the underbody in the form of pistons and levers so there was at least some pseudo structure that you could argue scientifically would hold Mechagodzilla up. You needed to reflect the environment but he wasn’t shiny like a chrome ball. More weathered metal. We built a bunch of weapons into him. He has a drill tail and missiles. Inspiration for the fighting style of Mechagodzilla came from wrestling, boxing, and mixed martial arts.”

“It’s crazy the amount of work required because everything is being simulated against each other. We tried to attack it in the order of things getting approved. If the layout of the ships were approved and those boats weren’t interacting with the creatures, we would simulate the ocean for them. Once we got the final animation of the creatures that interacted with the boats, we could start large scale simulations, and do the detailed simulations and secondary simulations sequentially afterwards.”

“We simulated bubbles off of Kong and Godzilla for every shot that they were underwater, and drips off of Kong and Godzilla anytime they’re out of the water,” states Scanline CG Supervisor Jonathan Freisler. “All of those simulations were done in real world scale which is big! By the end of finishing this whole movie we had used roughly a petabyte worth of simulation data. Our server for simulations roughly sat at 90-percent almost all of the time.”

“We got artists to constantly clean up any data and delete what they could, but sometimes we had to protect simulations for shots.” The proprietary water solver Flowline operates out of 3ds Max. “3ds Max has been our main tool for anything effects for the last 10 years. The majority of the destruction was done in Thinking Particles and 3ds Max. Houdini was used for the complex hair interaction with debris because it handles that stuff a lot easier. Everything had to be recalibrated to work with how fast Kong is moving versus reality. We often had to multiply up the inherent velocity.” 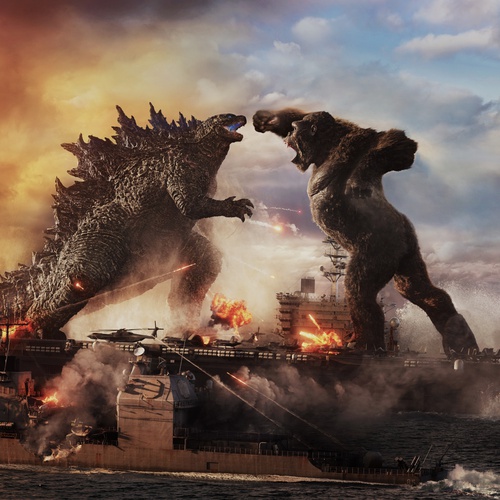 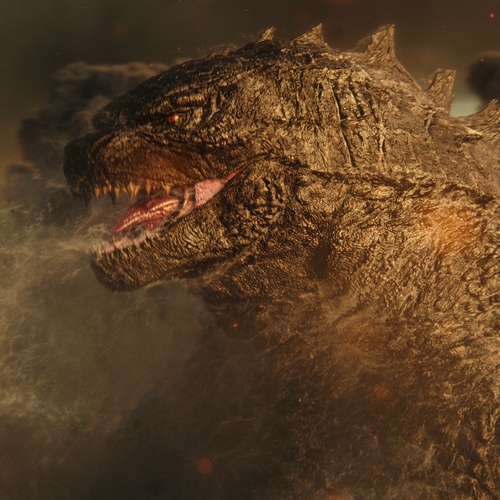 For the shots of Godzilla swimming towards the fleet, whales and alligators were studied. “Some of the fleet we had inherited from King of the Monsters and some stuff was shot on the USS Missouri which was a Pearl Harbor battleship,” remarks Hirota. “The fight in the movie has mostly the same beats that were in the previz; we reanimated some of it and proposed some ideas.” Practical elements were utilized for when explosions were close to the camera in order to enhance the realism and believability.

Destroying ships was fun because you get Godzilla’s tail cutting ships in half and dragging them underwater with anchors attached to him,” states Freisler. “That goes through the Thinking Particles destruction pipeline. The underwater treatment normally comes from a compositing process as in the depth hazing; it is tricky for us to see what our effects will look like in the final composite. There is a back and forth between compositing and effects.”

A showdown takes place in Hong Kong between Godzilla, Kong, and Mechagodzilla.

“A lot of planning went into Hong Kong to make sure we had a good idea of where the creatures would be fighting so that any of the buildings in that area could be properly destroyed,” notes Hirota. “A lot of the tall skyscrapers are covered with glass so they need to properly reflect what’s going on. We have an interior shot looking out as Mechagodzilla is slamming Godzilla into some buildings which had to refract correctly. We tried to keep the camera movement relatively simple and justifiable given what’s happening is so fantastic to begin with. Instancing couldn’t be used for any recognizable buildings in Hong Kong. There were blocks of generic lower lying buildings but we had a lot of bespoke individual buildings as well. There is a tremendous amount of simulation work just to keep up with the creatures fighting.” 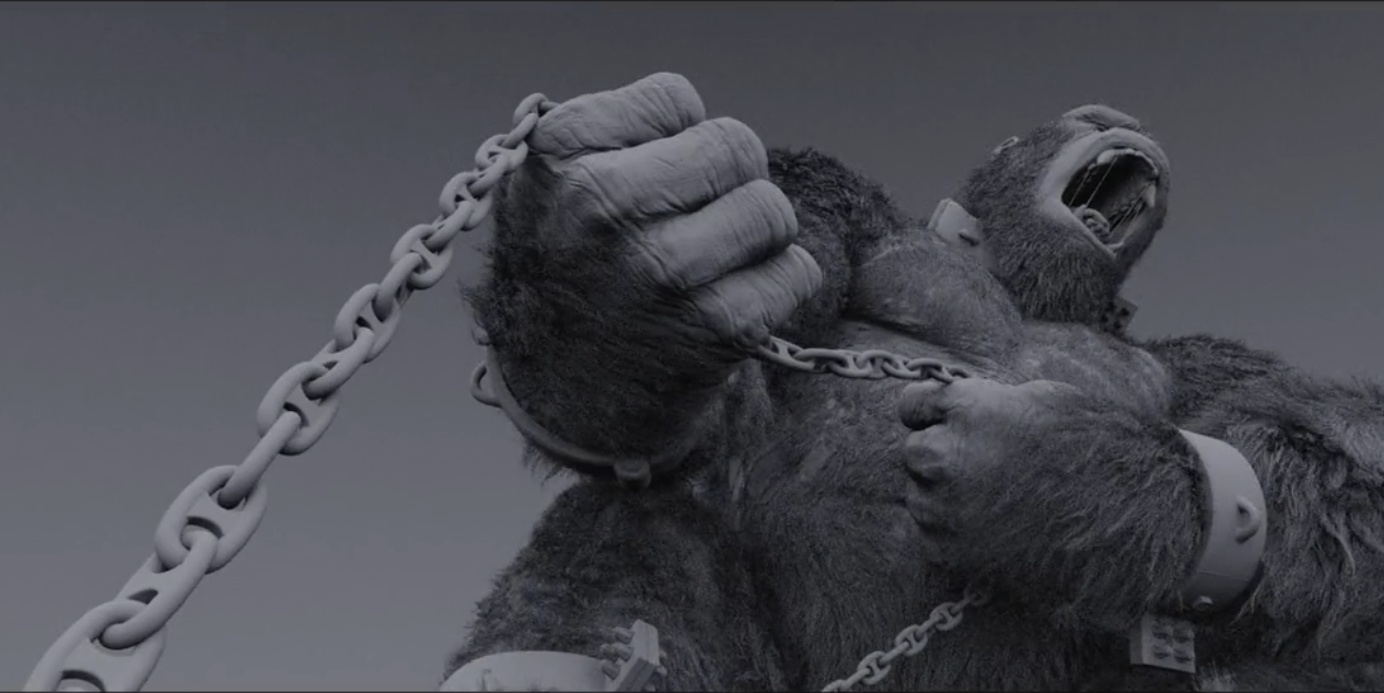 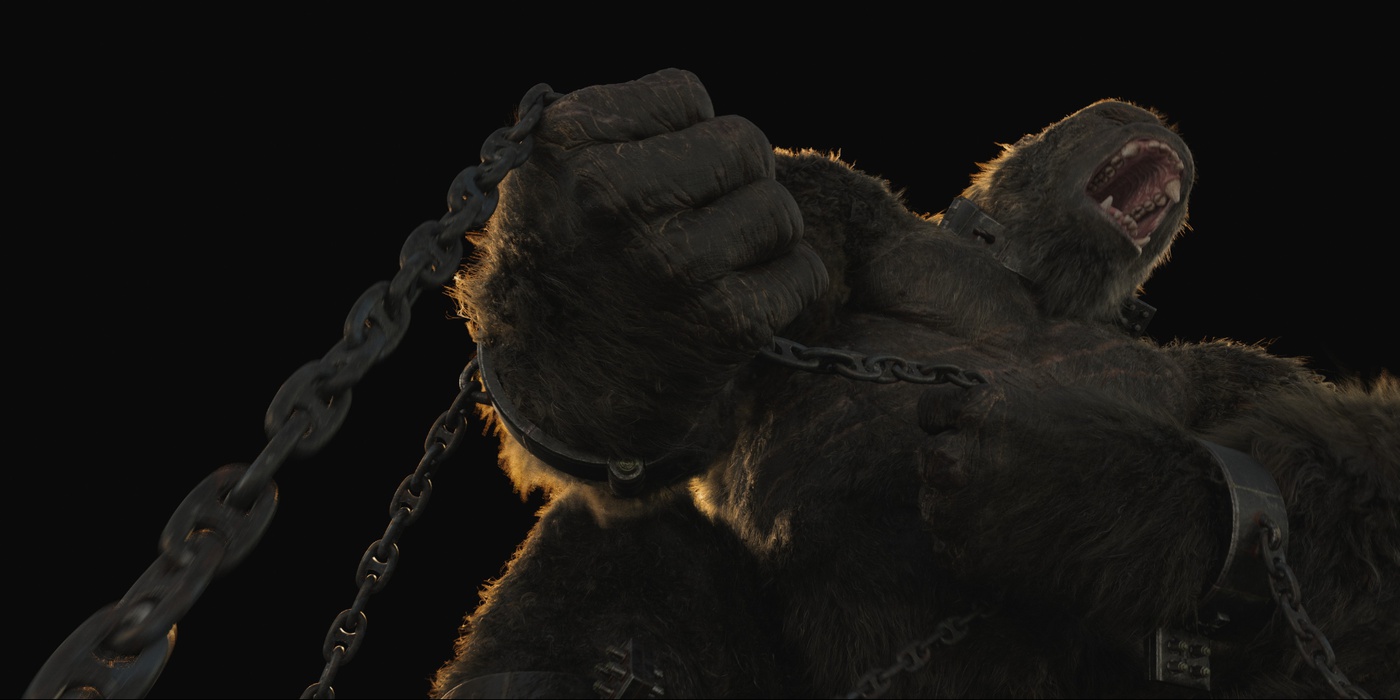 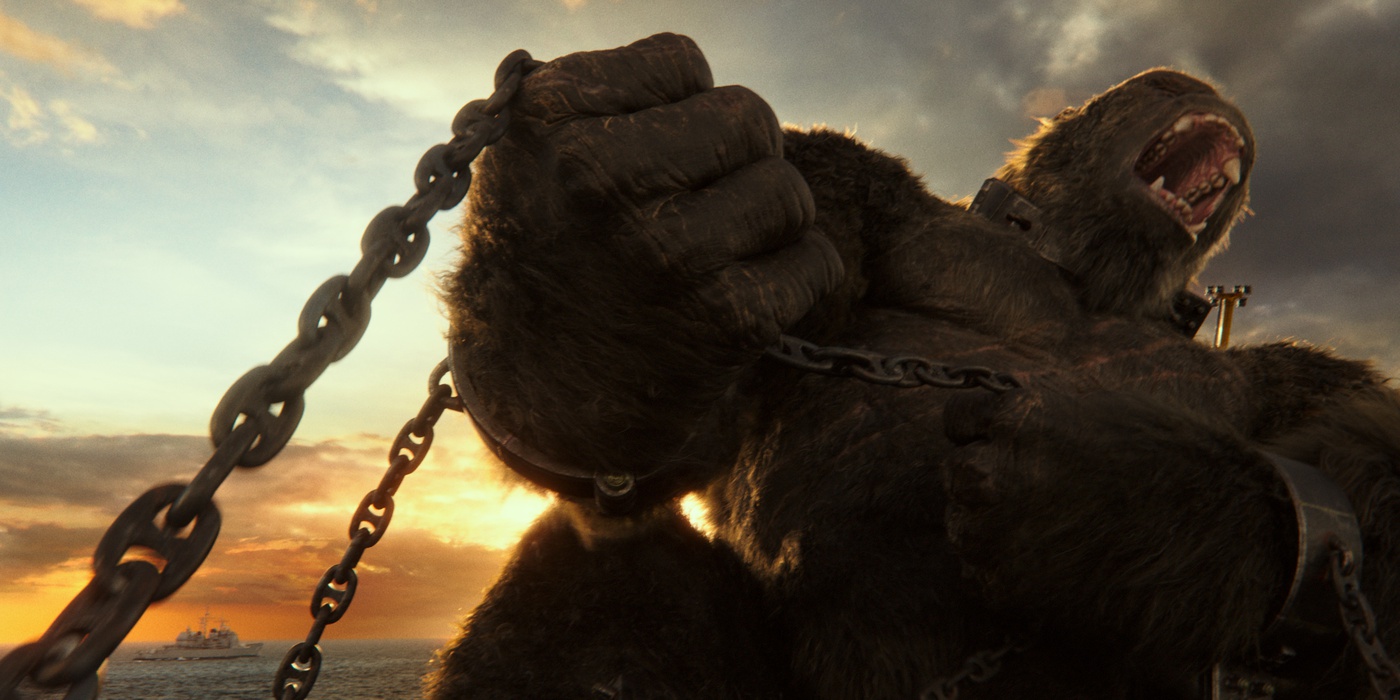 “Whereas Godzilla and Kong have one underlying continuous mesh, Mechagodzilla is made up of all these different components,” notes Freisler. “He is so dense in his geometry and so big as well. In Hong Kong, we had to scale up the characters by 1.8. All of the metal sliding was generally done in animation while we dealt with the secondary effects like his laser beam. We referenced The Core as well as the Death Star and stuff that ILM had done in Star Wars for giant laser beams. We arrived on a concept that had an inner and outer core. If you look closely, it is spinning and has all of these lightning bolts in it.”

“We originally had standard missiles for Mechagodzilla but Bryan wanted these different otherworldly ways of deploying them; that was fun as we had a lot of creative freedom.” Oil and grease were incorporated into the mechanical parts. “We had to do a lot of large scale almost firehose oil simulations anytime he would get cut with the axe or a limb cut off. Anything that we referenced was so small scale. The oil that is pouring out of him is going 20 city blocks in three seconds.”

“In the scene where Jia goes to Kong and Kong calms down, he needs to be sad,” observes Hirota. “Kong has to act in that moment. He signs that he wants to go home. Because he’s not doing big bombastic action all that you do is look at Kong; that sequence is complicated by the fact that he is sitting up in the rain so his fur is all wet and water is pouring off of him. We didn’t have much in the way of stand-ins. We had some pads for when she touches Kong’s finger, but usually it was a big greenscreen out there and we put up some laser markers for her to know where Kong’s head was. Credit to the actress who played Jia.”

“We shot that at night. The transport ship had some lights on cranes to keep the deck illuminated so we were able to playoff of that idea to rim light Kong and make him look interesting at night in the rain.” Not only rain had to be simulated. “We also simulated his breath because when he exhales, we wanted to see all of the moisture being emitted by that,” explains Freisler. “Bryan also wanted to see the fuzzy backlit layer caused by the rain colliding with the ground or with Kong. It probably doesn’t look like there are a lot of simulations going on in those shots but there are.” 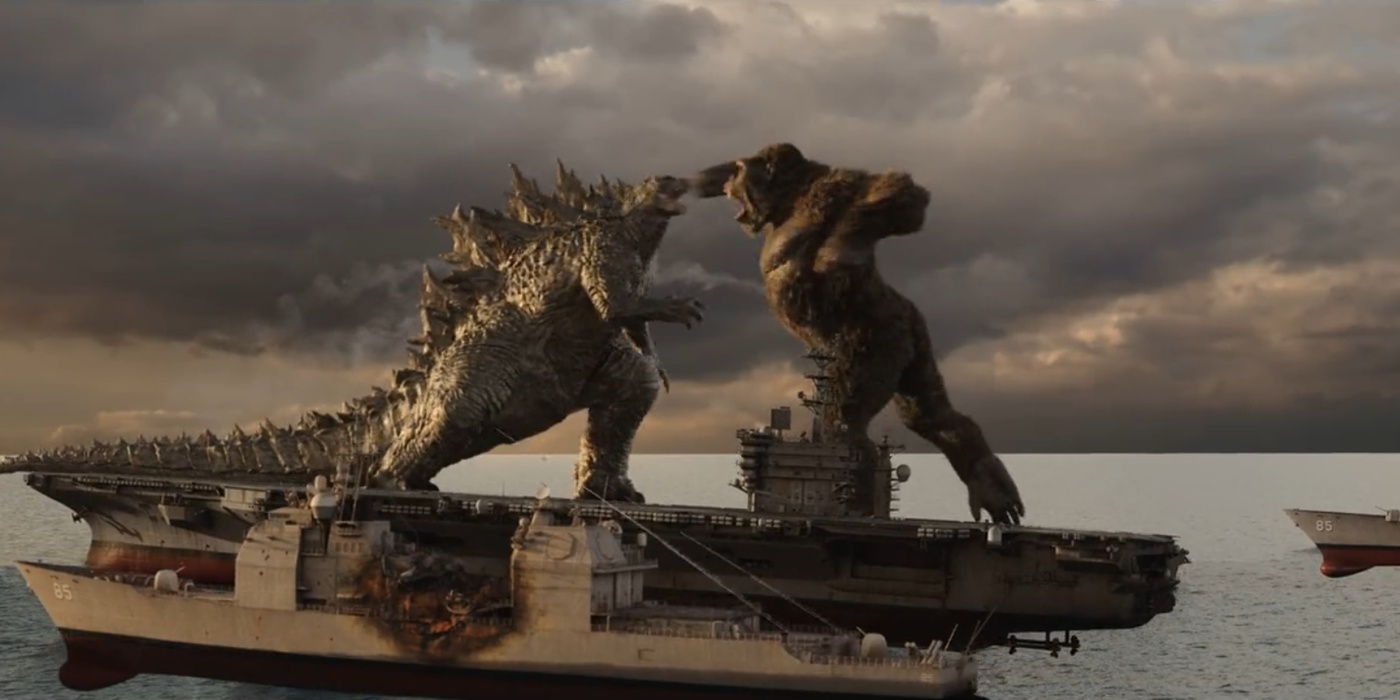 Technical modifications for the project were more evolutionary than revolutionary. “I enjoyed everything that we did on this movie,” states Hirota. “I like Kong dismantling Mechagodzilla. It was tough but was also something as an idea was fun for everybody. The team did an excellent job of pulling it off.” The amount of effects work was enormous. “There were over 2,500 unique tasks that we went through,” reveals Freisler. “The Sea Battle was the most challenging because doing a whole sequence of water is difficult. When Godzilla launches over the edge of the aircraft carrier, there are all of the explosions onscreen and we pan up to see Kong is my favorite shot. There are a few in Hong Kong and I also like Mechagodzilla rising up out of that steam when you see him for the first time.”