We talk to Greg Estes from NVIDIA to find out why Gone Girl director David Fincher chose to shoot the entire film in 6K. Plus! We discuss Google's Project Tangoto shed some light.

by Henry Winchester on 27th October 2014

We talk to Greg Estes from NVIDIA to find out why Gone Girl director David Fincher chose to shoot the entire film in 6K. Plus! We discuss Google's Project Tango
to shed some light. 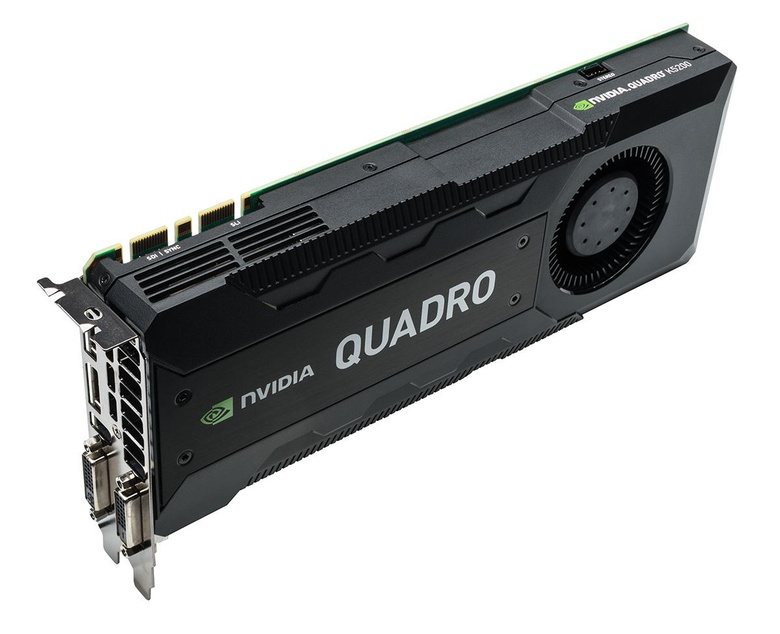 Meeting with NVIDIA's Greg Estes is always a pleasure, especially if youre into VFX geekery like ourselves. Every conversation is littered with big Hollywood names, movies and studios, as well as some of the most important games companies on the planet.

The companys most recent announcement has been its new range of Quadro professional graphics cards, which cater for everyone from bedroom effects artists to some of the biggest names in VFX.

We recently caught up with Estes in London to find out about the companys pivotal role in the production of Gone Girl, the future of virtual reality, and Googles intriguing Project Tango.

NVIDIA's VCA, which is set to revolutionize rendering times - if you can afford it! © NVIDIA

David Finchers Gone Girl is, like most of Finchers movies (Zodiac, The Social Network), pushing the boundaries of VFX technology while looking very much like a normal movie. Gone Girls big innovation is its use of 6K cameras. Its the first film with a whole workflow in 6K", says Estes. They were one of the first to get their hands on the new system, before we even announced it.

As Estes explains, there are many complex layers of software that your average digitally shot film has to go through to even get it from the camera to a monitor - but NVIDIA can help every step of the way.

The way the sensors work on Red cameras is, they dont capture red-green-blue red-green-blue red-green-blue, Estes explains. They capture them in a very specific order - but its not the way that you would expect it to be. Theres a filter on there to do that, and its a way to get more information in a smaller space. But in order to do that, and see the colours properly, you have to do the maths to unpack it - that process is called 'Debayering'. There was a gentleman in the 70s, Dr Bayer, who invented this for Eastman Kodak, and its still used today. If its a Red or Arri or camera, you have to do this 'Debayering' process in order to get the colors right so you can see what its going to look like, otherwise everythings washed out. 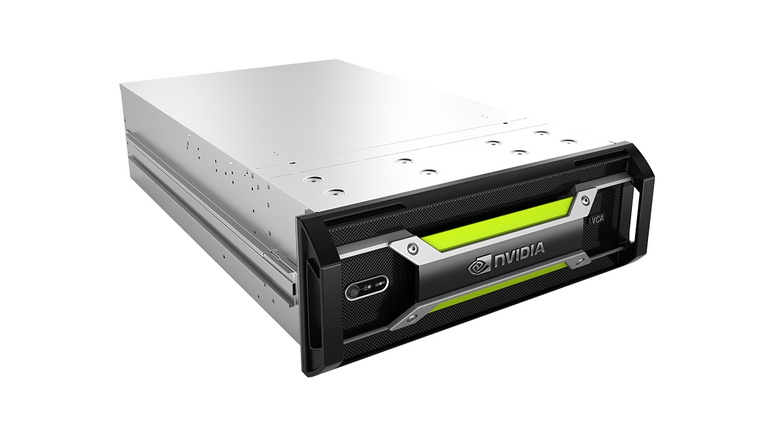 So theyre capturing these giant 6K frames, and then they used to require a card called a 'Red Rocket' card, Estes continues. The FGPA [Field-programmable gate array] is on there. They go for about £4,000. You used to have to have this whole dedicated card, very expensive, just to do the Debayering. Now the Quadro is able to do it! And its so fast that you can just do away with that card entirely.

Across the whole thing you see NVIDIA Quadro, NVIDIA Tesla, and NVIDIA software being used as well

Theyre doing that, the Debayering, the 6K to DPX file capture there, and once they do that they can bring it into Premiere Pro, and Quadro accelerates all the effects in Premiere Pro, and then After Effects, which uses NVIDIA CudaQuantel Pablo Rio, which uses Quadro as the graphics and NVIDIA Tesla as the backend processing - its a very high-end finishing product - and then back out for finishing into Premiere Pro. So across the whole thing you see NVIDIA Quadro, NVIDIA Tesla, and NVIDIA software being used as well.

While working in 6K is obviously challenging, the question remains as to why exactly Gone Girl was shot in 6K when cinema screens only generally go up to 4K?

You dont need it to be re-equipped for this new workflow, it just gives
you a better image

What theyre doing is, theyre taking the whole 6K frame, and a lot of the time theyre only taking a 4K or 5K portion of the screen out of it to use as the shot, Estes explains. Because just the way its framed, you may have an actor here, and something else going on over here, and they want this portion to concentrate on this person, so they can actually move the information around and capture different parts of it, as opposed to taking a whole 6K frame and always using all of it. So they actually used it for the flexibility and artistic use, as much as just extra pixels. And then when they do the final output they put it in the standard format cinemas use. You dont need it to be re-equipped for this new workflow, it just gives you a better image. 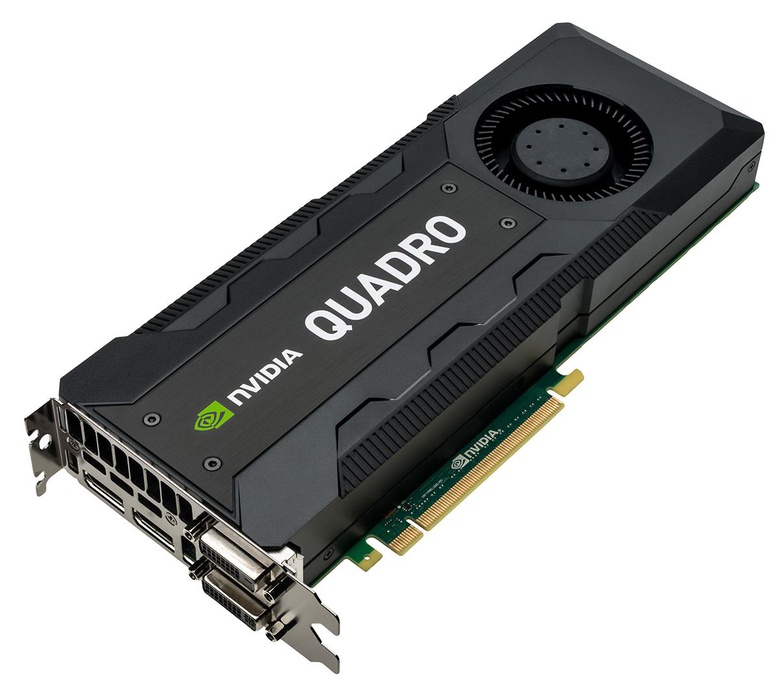 A Quadro K5200, which is the most powerful new NVIDIA graphics card, and one step down from
the Quadro K6000 released in July © NVIDIA

As well as revolutionizing the way movies are made, NVIDIA is becoming a key part of new virtual reality technologies which. Estes uses an image of Alfred Hitchcock framing a shot with his hands to illustrate his point: directors want to see the whole shot, not just a part of it - effects and all.

Maybe we want the monster from planet Goldfarb to be sitting right here, but you cant see that under normal circumstances if youre a director

Maybe we want the monster from planet Goldfarb to be sitting right here, but you cant see that under normal circumstances if youre a director, Estes goes on to explain. You cant have both actors and the CGI there at the same time because this is going to be done at a different time. Its now starting to be possible, if youre on a motion-capture stage where cameras can be completely locked down, and youve got dots on everybody so that theyre doing the motion capture and the rendering.

But weve been working on this really interesting new idea which is to use Googles Tango tablet, says Estes, showing a video of a man walking around an empty stage, but moving through virtual scenery on his tablet. This is just a technology demonstration, not anything you can actually go buy. But weve built an application which takes Autodesk Maya, and renders the computer graphics on a Quadro, like you normally would. But its connected to this Google Tango-based tablet.

Its actually drawing all the graphics on the Quadro based on the positional information that you have, so theres no live video coming in

The man then switches to another tablet and has much the same experience. Hes using a normal NVIDIA Shield tablet; its a great tablet but it doesnt have the forward-facing cameras of Google Tango, Estes explains. Its actually drawing all the graphics on the Quadro based on the positional information that you have, so theres no live video coming in at the moment.

"For instance, if we had a car, if we were a car designer at Audi, there could be a virtual car here in the room and we could walk around and look at the engine. That's cool on its own - but it gets better..." Estes teases.

"In real time, we're reading the world, we're figuring out what's in the world on that Tegra tablet," he continues. "We're sending that back to the Quadro, the Quadro is saying 'Okay, I know you're facing here, I know the world looks like this, I know all these objects in the room, I'm now going to draw them.' So you use the power of the Quadro to draw it from that exact angle using the 6 degrees of freedom."

It sends that information back to the Google Tango tablet where the Tegra processor in there puts that back together," Estes says. If I was sitting here with the Tegra tablet I could see you, and I could see the monster from planet Goldfarb right here as well at the same time, in the exact same angle, and as I move the camera around the monster stays perfectly correct, because it's recalculating everything. So there's four NVIDIA technologies all working together in one place: the rendering, the camera, it's using Grid, and it's using the graphics in the tablet.

NVIDIAs other major new technology is its VCA, or Visual Computing Appliance. This server-mounted box contains eight high-end GPUs specially built for the system, as well as a Xeon E5 CPU and 256GB system memory.

It's a box that's purpose built just for rendering, explains Estes. There are 8 of our highest-end GPUs in there, and that is the box that you would use if you wanted to do remote rendering. You have a workstation there, so this is not VDI, it's not a Grid-based thing where Maya or whatever application you're using comes to you from the cloud somewhere. You still have a Quadro workstation, you still have Maya, or Adobe, or whatever you're running there. At SIGGRAPH 2014 we had 10 of them, which were pumping into Vancouver from Silicon Valley, from 1,000 miles away, or whatever. We were able to just pull down one menu item in Maya and suddenly that model was being rendered there in Silicon Valley, and we could see essentially real-time ray-tracing at SIGGRAPH!

It takes 2 to Tango

To see NVIDIAs technology in action is mind-blowing, and Estes even cites Kevin Margos Construct - which weve featured on this very site - as an example of what can be achieved with the virtual reality techniques.

Estes is also the second person weve interviewed recently (OTOYs Jules Urbach being the other - interview coming to 3dtotal soon!) to mention how important Googles Project Tango is in the development and building of virtual worlds for both VFX and virtual reality. Its mind-blowing stuff - but NVIDIA appears to have a handle on both the complexities of generating VFX at lightning speeds, and selling its graphics cards to the most important companies behind it all.