Man of Steel VFX: Putting the "Super" in Superman

There can be few contemporary directors more suited to taking on the herculean task of reinventing the Superman legend than Zack Snyder. He's already proved his comic book nous with his adaptations of 300 and Watchmen, and Dawn of the Dead and Sucker Punch have proven his penchant for large-scale destruction.

Joining Snyder on his journey to the heart of the Man of Steel is regular collaborator The Moving Picture Company, the visual effects geniuses who've recently helped bring World War Z and Fast & Furious 6 to life on the big screen. We chatted to the group's Oscar-winning visual effects supervisor Guillaume Rocheron about its work on Superman's latest adventure.

"Zack didn't want to use things like wire rigs for the characters," says Rocheron, pointing to the panel-breaking ultra-fast movements prevalent in the comic books - something that was sorely missed when Christopher Reeve glacially descended from the heavens in the earlier Superman movies. "When he moves, he moves really really fast. He's not bound or constrained by Earth limits, like gravity."

"Actors can't fly. We can't throw them 50 feet into the air and crash them into the ground."

While Superman's super speed and strength make him an ideal candidate for a snappy summer blockbuster, he still has to be grounded - so to speak - in reality. "Superman's not human, he's an alien and he has incredible powers," says Rocheron. "The big problem with him is how you make the audience relate to him, and the action that you're seeing on screen. He's not a guy in armour, he's not one of us in a suit; he's an alien with these crazy superpowers who ends up on Earth."

To make the unbelievable believable, Snyder decided to shoot the action at an intimate level. "It's like you're watching some kind of documentary," says Rocheron. "The camera is right with the actors, and then if one of them jumps, or takes off, or gets punched, you want to be able to see that very big, in-frame. But, obviously, actors can't fly; we can't throw them 50 feet into the air and crash them into the ground making a huge crater."

The Fortress of Solitude sequence - which MPC worked on extensively - marks a turning point in Clark Kent's understanding of who he is and where he's from.

While it was always understood that these intense action sequences would require a great deal of effects work, current technology and processes simply weren't up to the job. Shooting a conventional 2K tile means you can't push into or move around the frame, so Rocheron and MPC came up with a whole new process: Envirocam.

"It's a motorised nodal head that drives a Canon 5D, and that digitally captures a 50K full-360 panorama of the entire scene," says Rocheron of the new technology. "We wrote an entire workflow to stitch all those images, recreate 74 projection cameras in NUKE, and then re-project that onto our 3D geometry for the set. We were able to move the virtual camera pretty much anywhere we wanted into that captured set on a shot-by-shot basis."

"You would hover to get to the same height as him, and punch him in the face."

With digital versions of each and every shot in place, and intricately detailed digital doubles ready to go, the team were able to do just about anything. Rocheron recounts a scene in which Superman fights an eight-foot-tall entirely CG adversary called Nam-Ek. A shot was filmed with Superman punching a stuntman wearing a performance-capture suit, but they soon realised that when Nam-Ek was scaled up the fist hit his chest, rather than his face.

"If you were Superman, and you were able to fly, you wouldn't stay on the ground and punch that guy in the chest," says Rocheron. "You would hover to get to the same height as him, and punch him in the face. Because we had all the Envirocams, we were able to recreate a complete CG version of the set, and because we had an extremely high-resolution double of Superman we were able to say, 'Let's just use our CG Superman.'"

Superman hands himself over to General Zod's evil forces - a move which helps the people of Earth trust him.

Aside from the need to remove the crew from the set whenever an Envirocam was taken, Rocheron reckons it made the whole process of creating Man of Steel a lot easier. "I think it would have been really difficult and really problematic if we were just saying: 'We'll just make a completely digital version of the set by texturing every building, by trying to replicate the lighting and all the little details you get in practical photography.' We had the geometry of the scenes because we did LIDARS and scans of all sorts of the environment, but it was literally capturing the light, capturing the textures."

"We've used it on every single project at MPC, because it has the ability to program whole materials that are going to be deformed or destroyed."

As well as shaking up the film's action with Envirocams, MPC used its bespoke KALI software for destructive scenes, such as the Smallville battle. Originally developed to render splintering and cracking wood in the giant samurai fight in Snyder's Sucker Punch, the software has branched out into other materials such as concrete and metal.

"We've used it on every single project at MPC, because it has the ability to program whole materials that are going to be deformed or destroyed," Rocheron says. "When you destroy concrete it breaks in a certain way, and cracks in a certain way. Metal is different, metal tends to bend and shear and cut slightly differently. We had a lot of destruction work to do, and we used KALI a lot."

As well as providing a high-resolution digital double of Superman, MPC also created one of Faora-Ul (Antje Traue) for the Battle of Smallville sequence.

A Piece of Cape

A subtler effect Rocheron worked on was Superman's trademark red cape. "The cape is very iconic," he says. "It's a direct extension of his body; it's used in conjunction with his pose to get those very strong and cool silhouettes. It was very important to get that right. You don't want the cape to just rest behind him, not really doing anything interesting, it has to be there to emphasis his movement."

"We were treating the cape literally like a character."

To get the cape to move and flow correctly MPC wrote a system whereby a basic version of the cape could be keyframed to set up certain shots. From here, the team wrote a pipeline so the cloth simulator would fill in the additional movements to achieve the right level of grandiose - but understated - billowing. "We were treating the cape literally like a character," says Rocheron.

Superman's jaw-dropping first flight sequence was also created by MPC. It's a critical part of the movie - it's the first time you see Superman in his outfit, and it conveys the power and freedom the character has. "Superman tries to control his power," says Rocheron. "He attempts to fly over the arctic environment, crashes into a mountain, and realises that the sun is his main source of power."

Having left the Fortress of Solitude, Superman tries out his new-found abilities in the arctic.

Once Superman's airborne, he flies into the upper atmosphere, into space, and then returns for an aerial tour of the planet. "We did a fully-digital Utah canyon to frame the action nicely for his movements, and we did a CG African savannah where he flies over a herd of zebras, which is a little homage to the Superman: Birthright comic book," says Rocheron.

"We put the camera on a virtual jet, which can circle around at speed, and you'd have to use very long lenses to be able to get close enough to the characters. It's all about how you design shots in a realistic manner."

MPC used NASA photography to create a CG version of the earth, and then inserted their spaceborne digital double of Superman.

In total Rocheron reckons MPC worked on 450 shots for Man of Steel, and he's most proud of his work on the Envirocam process. "It's really a cool upgrade to what's been done before with virtual cinematography," he says. "We've been capturing scans, we've been capturing textures - but here we can capture shots."

It's also something he's using for forthcoming projects. He kept schtum on what these might be, but he's credited on Ben Stiller's The Secret Life of Walter Mitty and Gareth Edwards' new take on Godzilla.

"We developed it for Man of Steel, but it's something we're starting to use on all pretty much all our films at MPC," he says. "There are a lot of different uses - you can use it just to capture sets and generate references, but I'm using it on the project I'm working on right now to capture scenes." 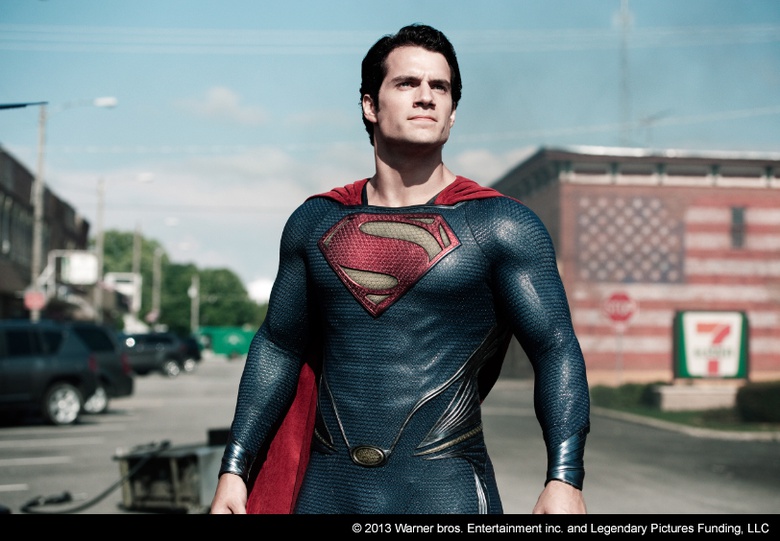 Superman during the Battle of Smallville sequence, which made extensive use of MPC's Envirocam technique.