Skyhouse Studios, an independent animation and VFX studio, working in the TVC, film and online media industries, reveals why it chose ftrack over Shotgun

Skyhouse Studios, an independent animation and VFX studio, working in the TVC, film and online media industries, reveals why it chose ftrack over Shotgun 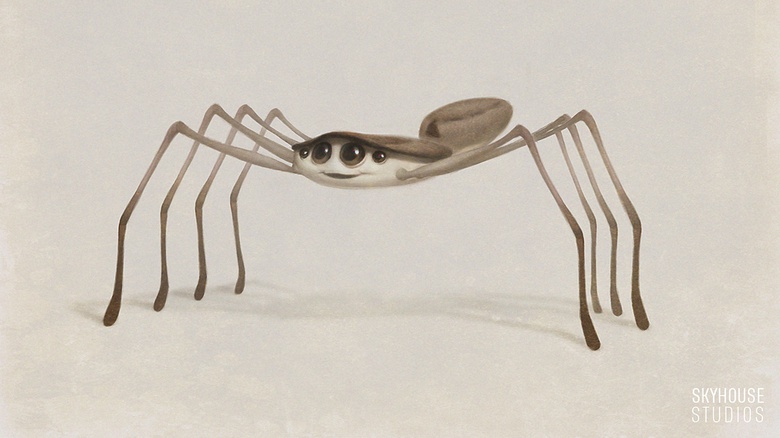 Skyhouse Studios is an independent animation and VFX studio, working in the TVC, film and online media industries. While there's a physical base in Sydney, Australia, the studio actually operates with artists working around the entire world.

This cloud-based work environment is one of the main reasons why Skyhouse adopted ftrack as its production management solution in March of 2014 - and there's been no looking back since.

Robert Grbevski, founder and production manager at Skyhouse, explains: "I chose ftrack over other project management tools like Shotgun because it was simple, easy and powerful to use. "It allows me to schedule, budget, quote and manage projects all in the one tool - plus I also found freelancers could learn how to use it very quickly because of its intuitive interface."

With ftrack at its core, Skyhouse produced Spider, an animation featuring a beautifully-animated creepy crawly and its adventures while a man tries to wash his car. The advert for the Gerni Titan, created in just 3 weeks, required a photorealistic spider across 5 shots - something that required a solid base to keep everything organised - and ftrack proved ideal.

"ftrack helped us to identify problems in our schedule," Grbevski explains, "Sometimes things take longer than first estimation so you need to be able to assess the problem and resolve it quickly. How well you do that can be the difference between making money or losing money and looking unprofessional. ftrack allowed us to monitor the hours worked on every task and shuffle things around if needed, or request more time from the client. It also helped us stay professional when scheduling client reviews. There is nothing worse than showing something half-completed to a client just because you have told them you would have something ready at a particular time!"

As with all projects, there were challenges to overcome - not least of which the tight deadline. But Skyhouse was able to put together a production that 'blew away' the agency and director. Grbevski explains: "It was important to establish with the client what was achievable and then exceed that internally." 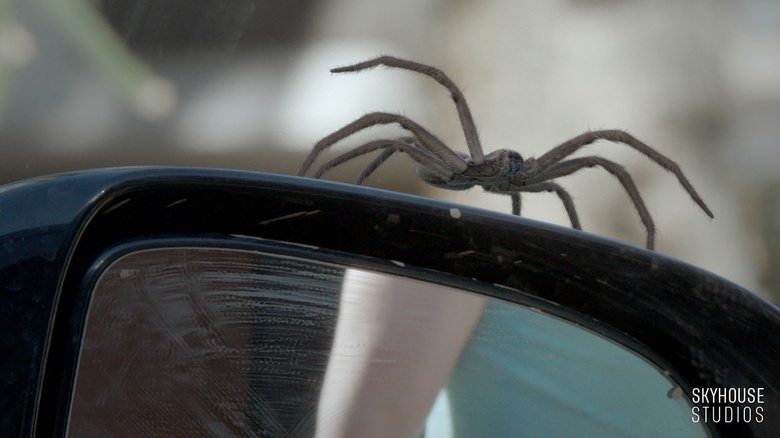 Skyhouse Studios had to model, light, texture, rig and animate the spider across 5 shots 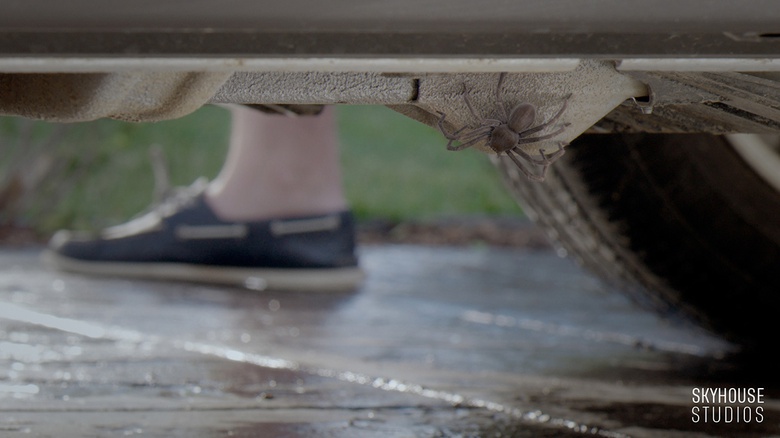 The production of the spider by Sjyhouse Studios 'blew away' the agency and director! 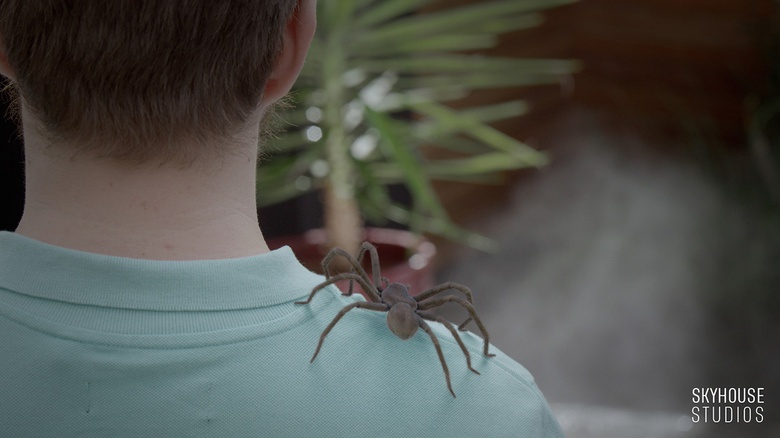 While Skyhouse Studios would have liked to animate a more cartoony spider, this middle-ground between realism and cartoon gave pleasing results all-round

The creative process itself was, as is often the case, a collaborative effort: "I took lead in creating the spider which included lighting, texturing, modeling and rigging," Grbevski says, "While our freelance animator, Bachir Kazzi, handled all of the creature's animation. We collaborated closely with the director, Tim Glastonbury, and his production company, Citizen, who handled all the editing and final grade.

The original vision for the spider was to give it more of a cartoony look with a face to portray more emotions. "We even had some brilliant concept designs painted up by the very talented Jan Vidra, notes Grbevski. It would have been so much fun to animate a more cartoony spider, however the final decision was to go with a more realistic one." In fact, the final broadcast version was something of a middle-ground between realism and cartoon. 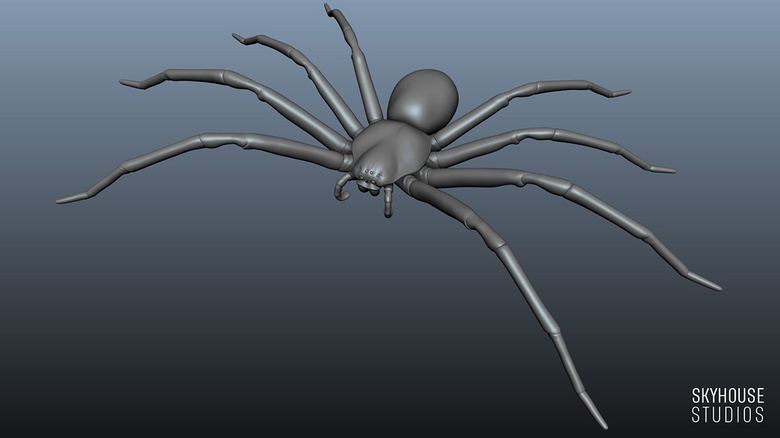 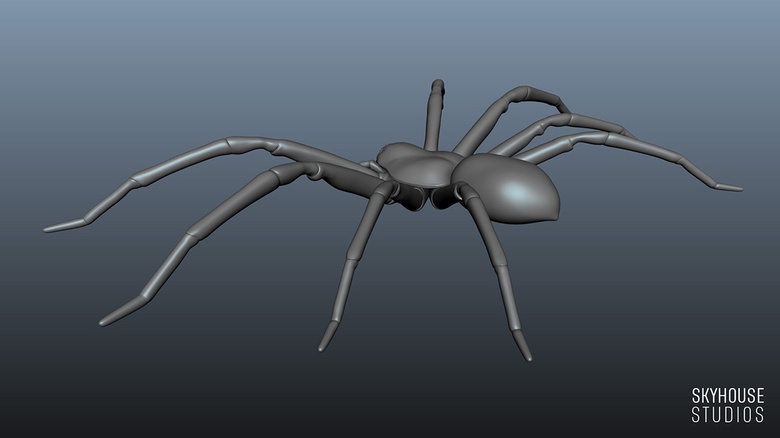 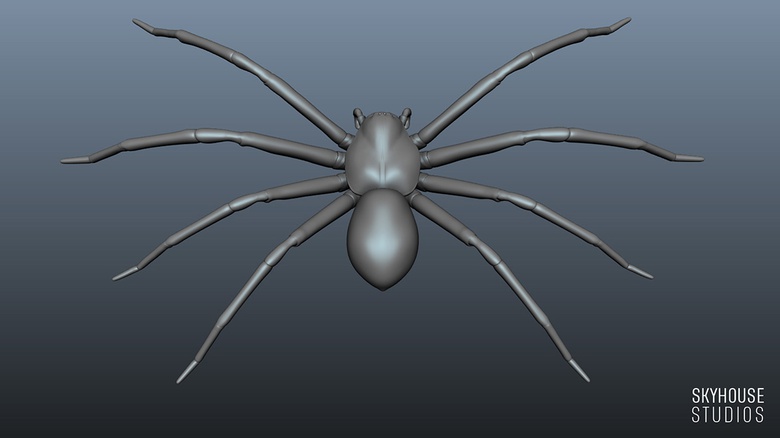 Making the creature required a few different tools, all centralised through the use of ftrack. "The spider's base mesh was modeled in Maya and then sent to Mudbox to sculpt out the finer details and have textures painted," Grbevski explains, "We then exported the new spider as Ptex Textures for rendering in V-Ray for Maya. We also used V-Ray's built in fur system for all of the spiders fur. During this whole process we uploaded stills of the spider to ftrack for approval before moving onto final animation and rendering."

"We tried using Shotgun before finding out about ftrack. Shotgun turned out to be too complicated for our needs"

Skyhouse wasn't always an ftrack studio, but as Grbevski says, the other platforms just weren't up to the standards the studio required: "We tried using Shotgun before finding out about ftrack. Shotgun turned out to be too complicated for our needs. We also tested Arc9 and other third party tools that integrate with Google Apps, but they lacked the flexibility offered by ftrack."

"Given that Skyhouse Studios is a cloud based studio, we need tools that are simple, intuitive, accessible around the world and easy to deploy," Grbevski says, "ftrack ticks all of these boxes. It works right out of the box, does not require any further development and takes about 5-10 minutes to get new artists operational."

Skyhouse's favorite feature is the ability to create custom attributes for tasks like freelancer day rates or studio rate. "It allows us to treat the ftrack project view like an Excel spreadsheet. This efficient workflow allows us to simultaneously quote and schedule a job. When the job is approved, we simply leverage off the initial setup for final production."

But probably the most important question of all - does anyone on the Skyhouse team suffer from arachnophobia? "No," Grbevski laughs, "But the shot of the spider crawling up the actor's back got a few people creeped out!"