FX studio a52 talk about helping to create the latest Forza 6 cinematic trailer, which follows the Ford GT cover car through the re-creation of iconic games of the past...

FX studio a52 talk about helping to create the latest Forza 6 cinematic trailer, which follows the Ford GT cover car through the re-creation of iconic games of the past...

Established in 1997 as a destination for the very latest in high-end photo-real visual effects, a52 has become home to innovative and talented artists. Recognized as a boutique among the bigger VFX houses, a52 is known for having a critical eye and careful attention to detail in doing elegant and seamless work for commercial directors and agency creatives.

On a technical level, a52 has been recognized by the industry's artist pool as having a forward-thinking pipeline for managing the extreme growth in data sizes and formats. The engineers and technical directors at a52 have developed proprietary workflows that reduce media redundancy and the associated time and material cost implications.

Since 2009, the company has doubled in size and continues to attract talented artists from the industry. They are located in Santa Monica, Calfornia.

"We've long had a great relationship with Director Michael Spiccia and Agency two fifteen mccann," state a52. "Both Michael and the Agency engaged us early on as collaborators. VFX Supervisor Andy McKenna worked very closely with Director Michael Spiccia during the pitch phase of the spot, helping to develop the early ideas for the look of the worlds, as well as the very early brainstorming on how to best capture an authentic racing feeling which was very important to Michael."

"Once awarded, pre-production included conversations with Michael, regarding a deep and extensive exploration of the look and actions in the spot. It was important to Michael and the agency (two fifteen mccann) that we ended up shooting these worlds with a dynamic cinematic language that people had never seen applied to vintage games before. Merging with that, we also needed to obey the limitations of the games. It was very important to Michael to give a sense of evolution through the journey, but also to communicate the specific games quickly. He wanted to use a dual approach in the cinematography that would keep the spot modern, exciting and visceral, but also connected with the ethos of the original game."

"We carefully and extensively pre-vised every scene in the film and we discussed the best plan for executing Michael's vision, which took note of some of the best race car sequences from feature films of the past as reference."

"As far as look and actions – each world was based on an iconic racing videogame from the past. This first world was based on Gran Trak 10 which was a two-dimensional game – viewed/played only from overhead in a 2-dimensional view. Michael wanted to inject viewers into all of these worlds as if they actually existed, in a three-dimensional way. The fun was designing worlds that acknowledged and connected instantly with the past but in a revolutionary way. Michael tasked our designers with retaining the key elements of each game world, their unique spirit and details, but he wanted to grow them into completely immersive realms, from perspectives which elevated each world to a whole new level of imagination and excitement."

"Michael also wanted our design language to evolve with the progressive history of racing games. So where Gran Trak 10 consists of each individual pixel in a simple but beautiful (now 3D) world, proceeding game worlds would also evolve, increasing in complexity. For instance, the next game world, R.C. Pro-Am, contains objects designed from 20-pixels or blocks. Then in Pole Position we see objects that are now made up of 100 pixels... and so on."

The software for the Forza 6 trailer

"We separated everything into different worlds and treated them each separately. We used Maya and MARI through the whole process and composited in Flame. First, we modeled all of the elements, and gave them a basic texture. Then we ran those models and textures through some custom tools that use the Soup plugin for Maya. These custom scripts voxelize the objects, and transfer texture information to each voxel. This gave us the solid colored pixels. We then used another custom tool to layout the voxel cubes into UDIMs based on facing direction and painted more detailed textures using MARI. We rendered both versions so they could be worked on in comp."

"The car was shot on a gimbal with a techno dolly for some of the shots. In these cases, we tracked a shell back onto the practical car to integrate it into our worlds. For many other shots, we did everything in 3D to give us the flexibility to change the staging and camera work."

"We use Maya with V-Ray as our primary software package. We also use MARI and ZBrush quite frequently when creating assets. We also support 3ds Max, Houdini, Realflow, Massive and Krakatoa to name a few. For compositing, we pick the package that best suits our needs, be it Flame or NUKE. Our main goal here is to find the best artists, and make sure our pipeline is flexible enough to support any packages that the artists require. At the end of the day, it isn't the software that makes the work look good, it's the artist..."

"We're always looking for new talent! The biggest things are communication and teamwork. None of our projects are done by one person. They're accomplished by a team of people who focus on doing the best they can, and support the rest of the team so that everyone can put their best work forward."

Xbox Monument "What We've Been Racing Toward” - CREDIT SHEET 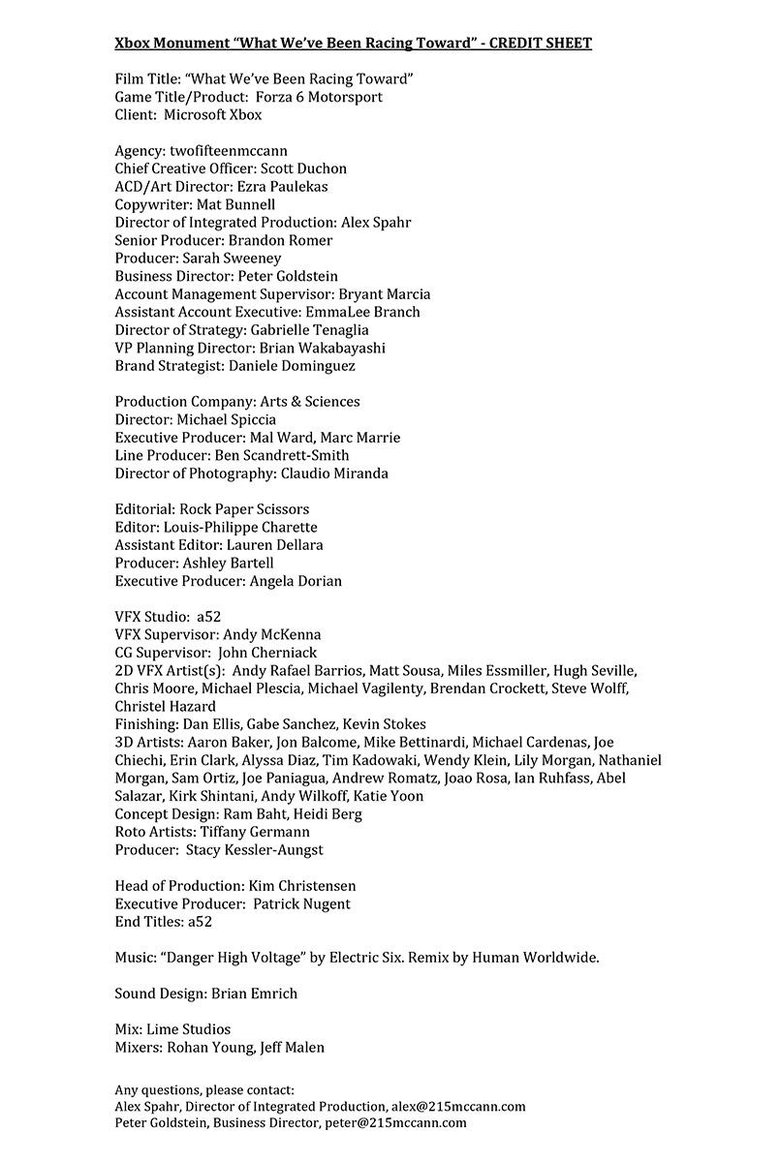