Follow fantasy artist Larry MacDougall through his drawing process in this third and final installment of his sketching series.

Follow fantasy artist Larry MacDougall through his drawing process in this third and final installment of his sketching series.

Designing a troll grandmother with her grandson is the assignment this time. I am going to love this. We will be dealing primarily with character and caricature on this one. I start by doodling out some goofy troll heads because I want to put some humor in this scenario. I have already come up with an idea I think I might be able to use and so I draw a frame around it so I don't forget. 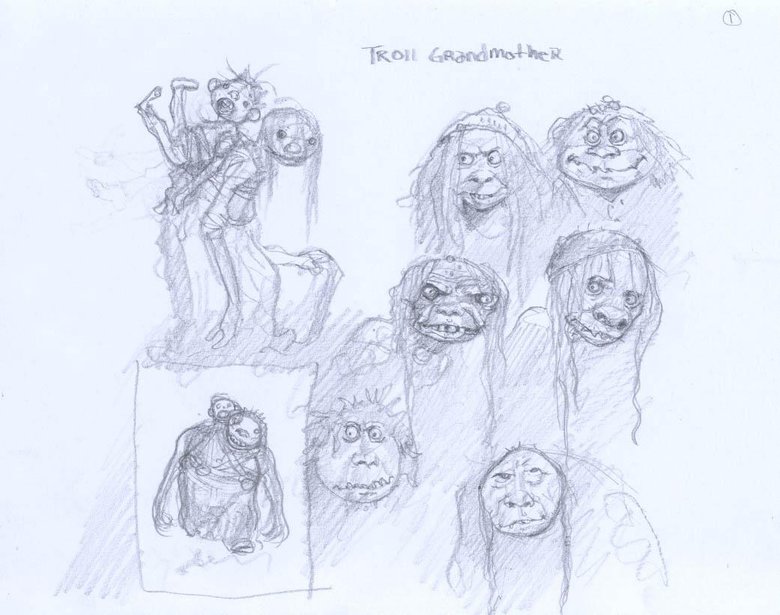 More troll ideas. I am thinking about the different ways a troll grandmother might carry a child and, if the troll has unique physical traits such as horns or extra-long arms, how might they be used. A troll grandmother is likely to be old, arthritic and possibly crippled or disadvantaged in some way. I try to keep this in mind when posing. 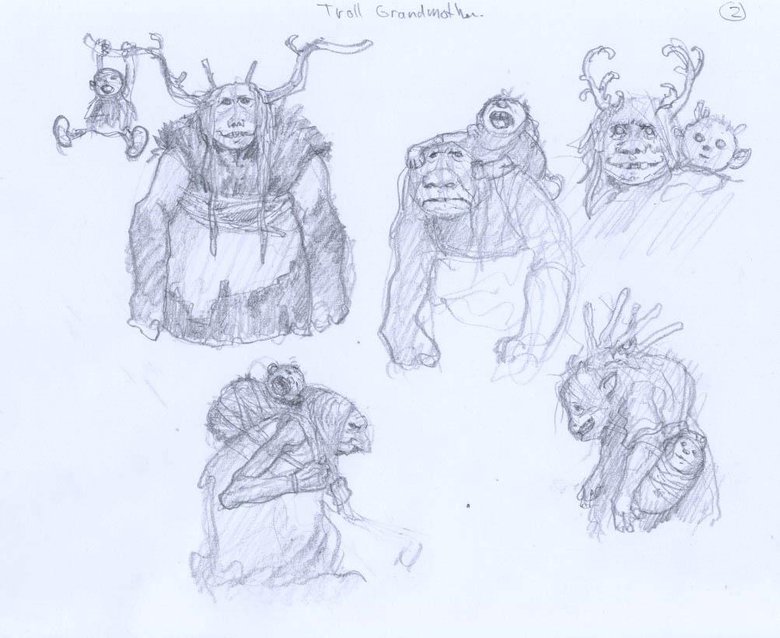 More roughs exploring different troll shapes. Over the years, I have been on many design projects concerning Arctic mythology as both a book illustrator and animation designer. The Arctic character and design aesthetic is almost second nature to me now and much of the fantasy design I do incorporates this. The character on the upper left is very Arctic or Inuit in style to me. There are a lot of trolls in Inuit mythology and I have drawn and painted them many times. 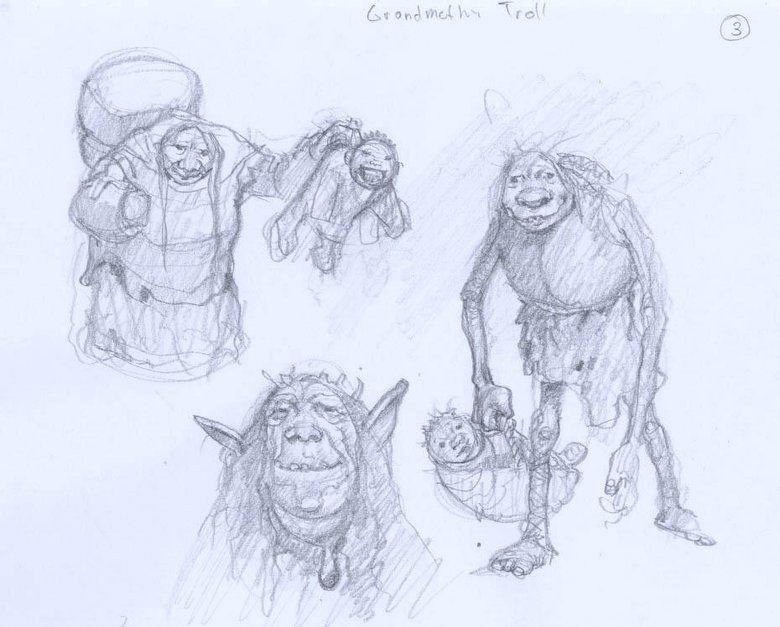 What if a troll grandmother gets stuck with a whole gaggle of troll kids to look after? What then? She will have to find a way to watch them and move them around en masse and not lose them. And if she lives in the north, she will have to keep them warm. 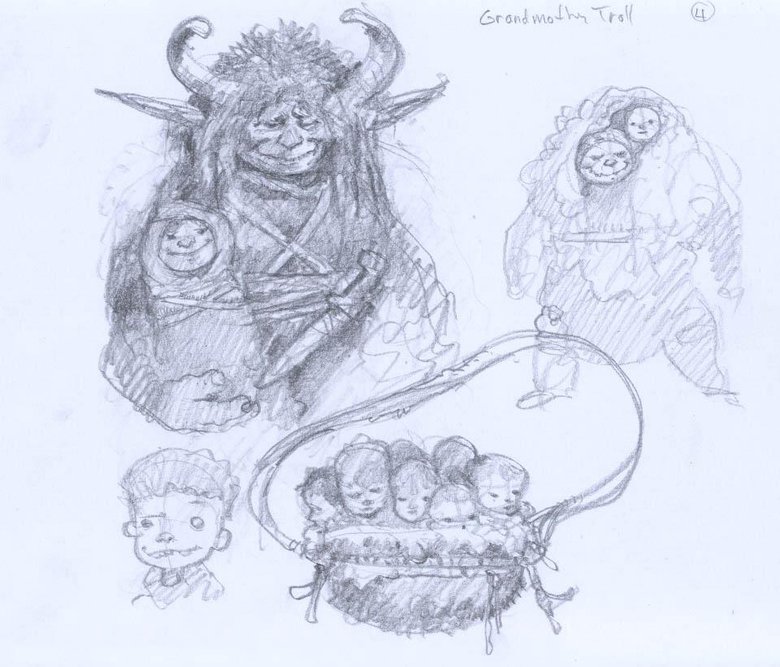 A few more ideas concerning troll anatomy, posture and transportation. The troll on the right with the basket on her back is right out of Arctic mythology – the difference being that in the Inuit story, the troll is a cannibal who takes children that don't listen to their parents and eats them. 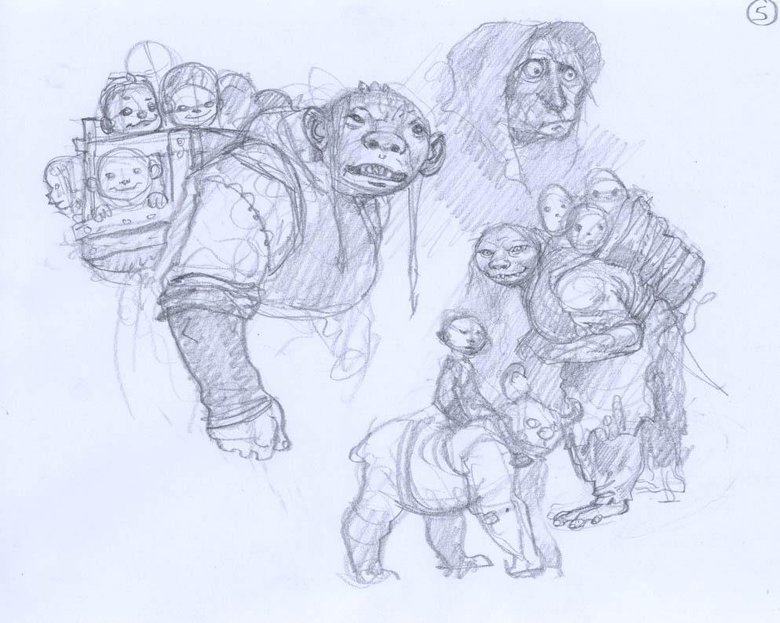 Still more drawing and thinking. I like the idea of the antlers as a place for kids to ride with their grandmother. I am leaving the Arctic behind for now and considering a more forest-oriented creature. She is wearing less fur and more leather. She has a tail now too in deference to illustrator John Bauer. 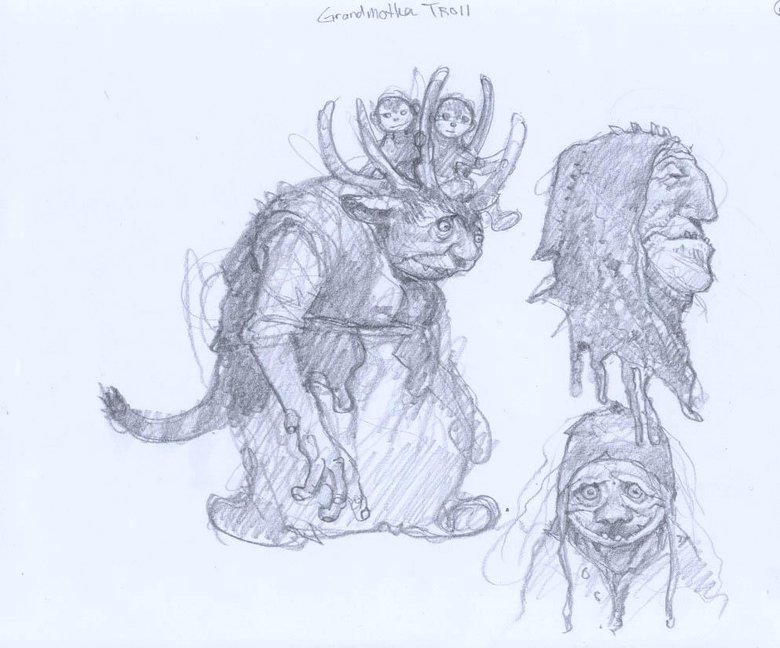 Here's one last page of alternative ideas before I commit to what I think my final idea will be. I have accumulated a collection of design ideas with the previous pages of drawings and think I can now assemble them into something I will like. 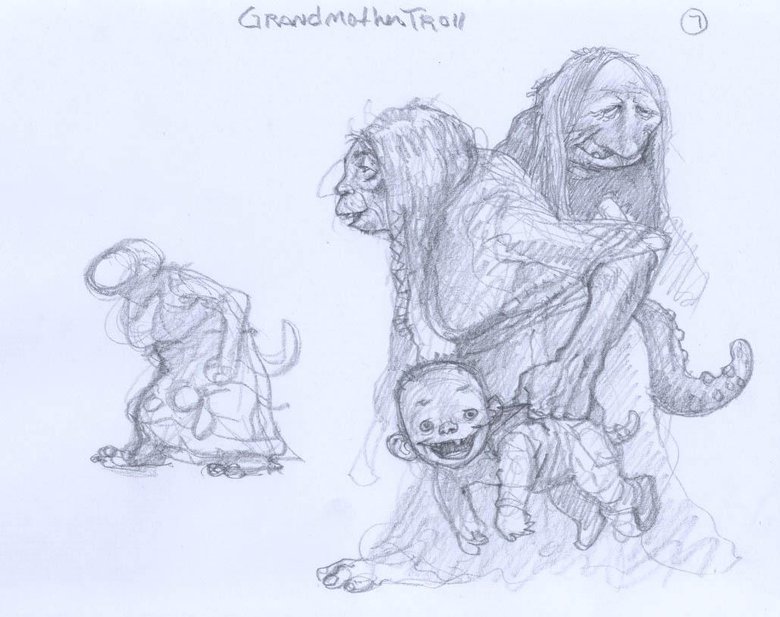 Here's one last page of alternative ideas before I commit to what I think my final idea will be. I decide to go for it here and draw the troll with her kids and place her in an environment; in this case, mountains. The root of this idea comes from the lower right-hand corner of step 2, but I have now expanded it to include several more kids and a background. 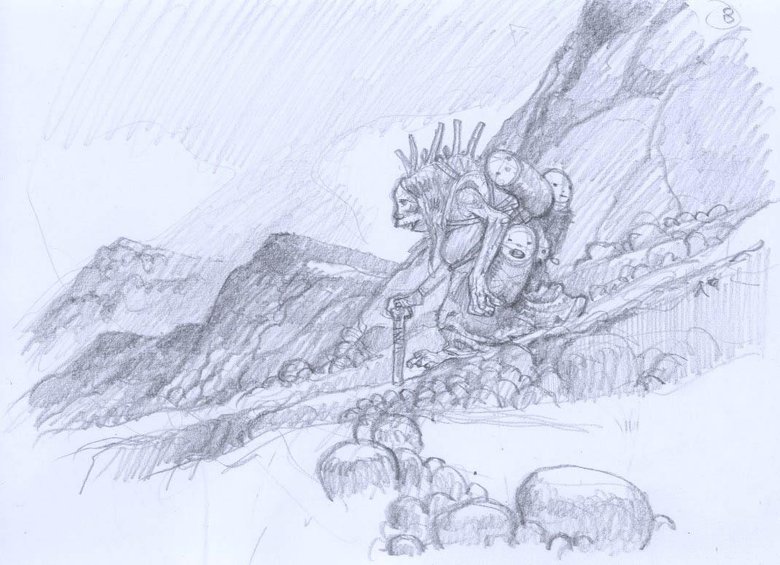 I take a shot at drawing her in a slightly more finished way but it doesn't quite come together. I also make a quick doodle of what her skull might look like. I really wanted to draw her arm and elbow though, and those fingers, just for fun. 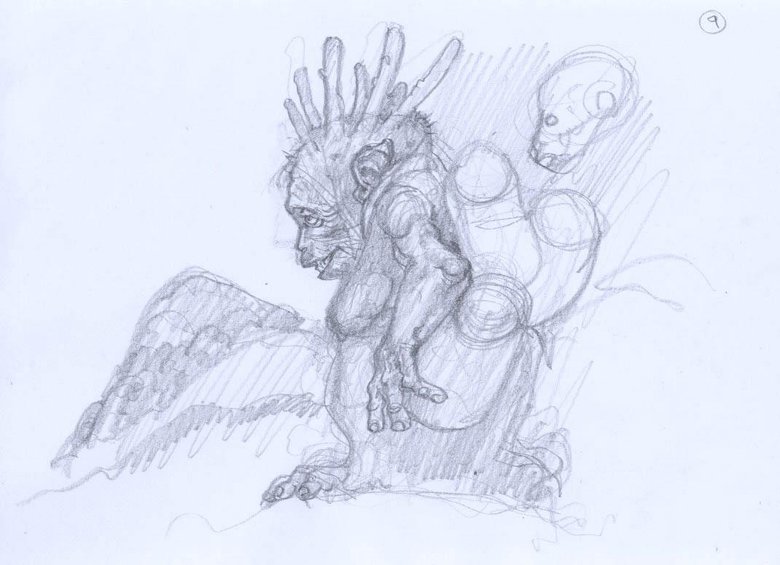 Here we have the final drawing with the troll grandmother and her three grandsons. I tried to think about making each child unique, and also about how they would be slung onto her with straps and some kind of rig. She has a knife, because she is a troll and why wouldn't she have a knife? She has a rack of antlers that have been blunted down for safety and an awesome elbow that is pushing into the head of one of the kids. I took away her walking stick because I always draw walking sticks, and decided instead to focus on drawing a characteristic hand. If I were presenting this idea to a client I would likely include all the drawings that pertain to this specific concept. They don't necessarily need to see everything unless you are getting paid to show them everything, but I would probably show the pages from steps 2, 8, 9 and 10. Hold everything else back for yourself – there might be an idea there you can use on your next assignment. 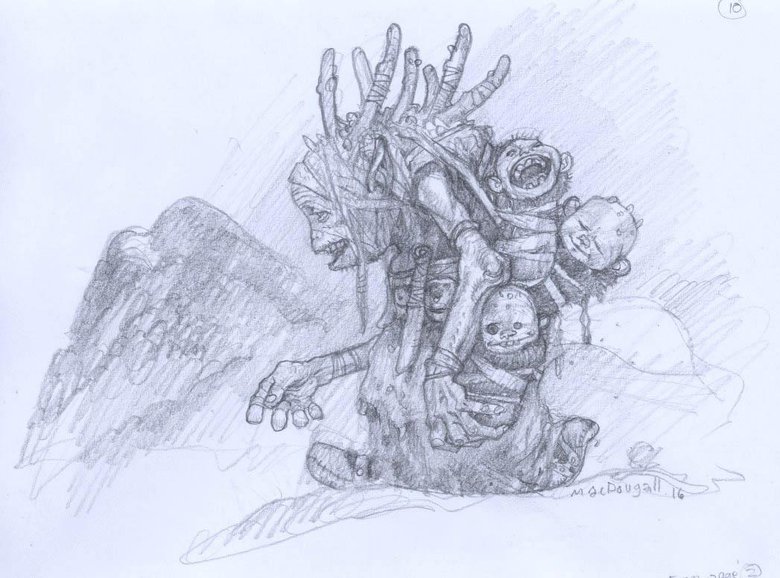