Take a look at the first of three tutorials from Larry

This time my project is to design a witch-hunting gnome character. My first instinct is to just jump in and start drawing. I know that gnomes are short and have big beards like dwarves, and I am thinking that a witch hunter is probably going to need some gear to fight with. This is where I start; vertically challenged elderly gents with a penchant for danger, not shaving and a certain amount of vengeful anger. 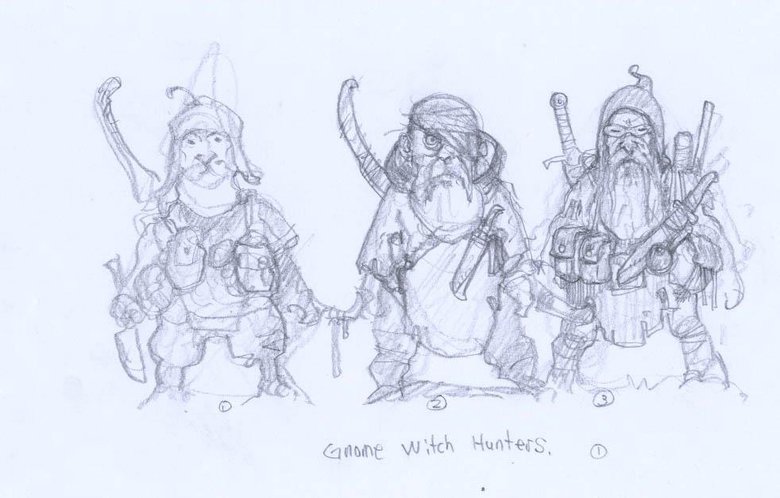 I am trying to reason out what kind of equipment a witch hunter, who does not want to die thirty seconds into battle, might need. A sword for close encounters, of course, but I'm guessing that you probably don't want to get close enough to a witch to use your sword, so I am definitely leaning towards a bow, for now, strapped to his back. It is also possible that hunting witches might make you a little paranoid and slightly crazed, so I have drawn the fellow on the right who has possibly been in one too many witch fights. 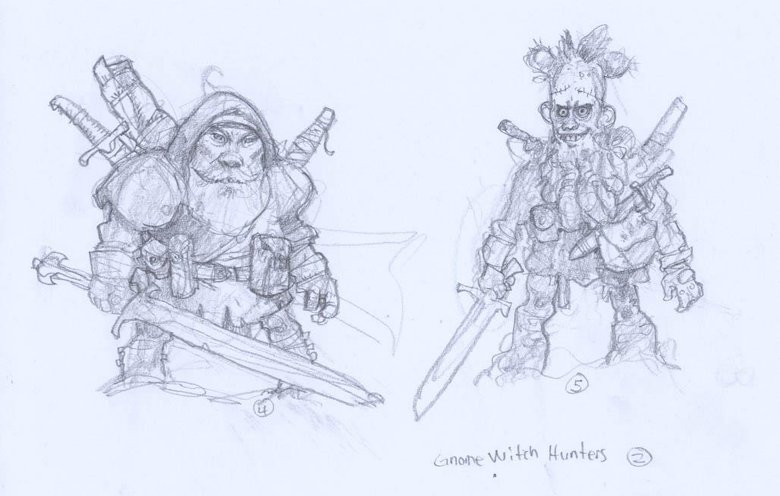 Now I am going to take a couple of my previous ideas and work them a little further. I like the idea of the safety glasses, which kind of remind me of the sunglasses the Inuit wear in the Arctic, except in this case they are meant to deflect spells and evil, not the blinding Arctic sun. I also have an idea for a crazier character with a gourd grenade. I imagine a hollowed-out gourd filled with a mixture of anti-witch magic and explosives, the wick lit and smoldering, ready to go (off). I am also thinking about the haversacks and ammo bags these guys are wearing. I see them as being kitted out like modern day police or military personnel, with a myriad of accoutrements attached to their belts, vests, and so on. 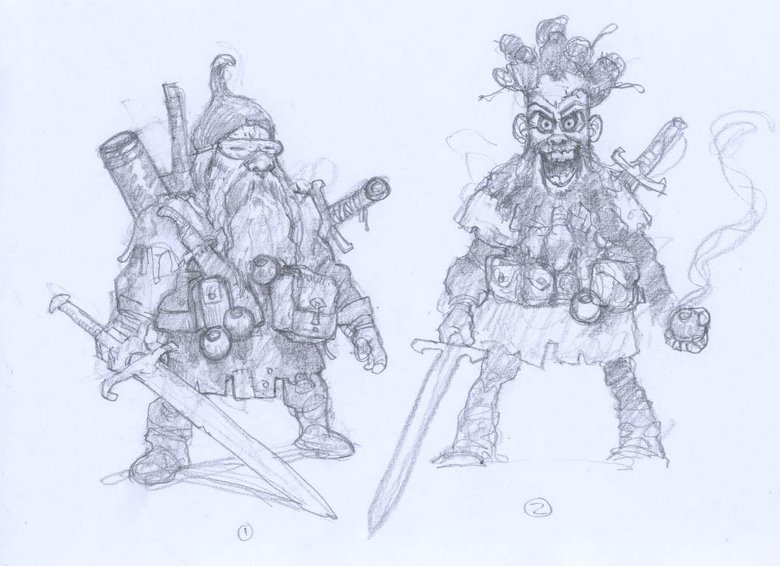 Here I'm think a bit more about gear. I still like the grenade idea. There's also a little doodle to consider the proportions of these guys and try out some dagger placements. 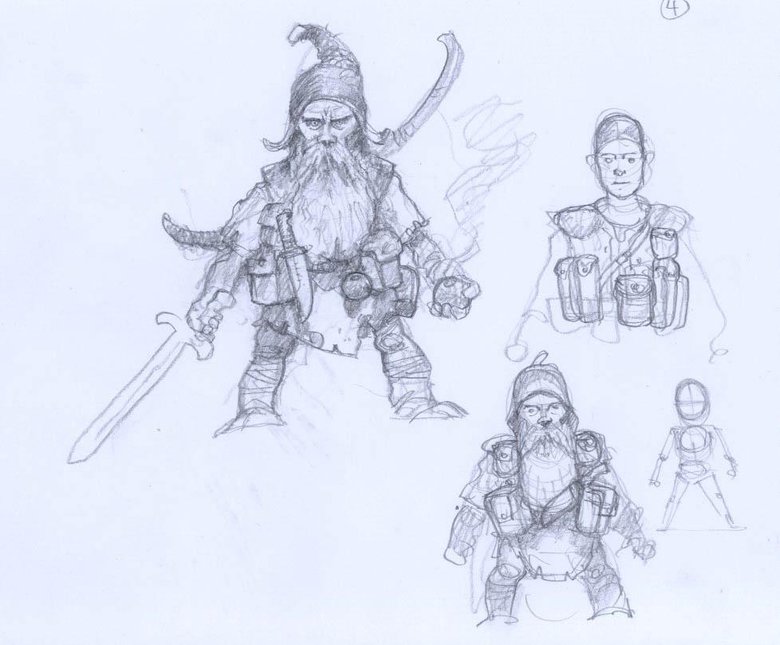 Here I want to slow down, take stock of all the ideas I like best so far, and put them all together. I have taken the one-eyed character with the poncho (from step 1) and given him the grenade. He has a bow because I think that would be the most useful weapon when wanting to maintain your distance from a witch, but also a knife in case things get personal. I have stripped away a lot of the gear because I am thinking this guy should be a stealthy forest stalker and not a front-line combat soldier. I think I have my character. 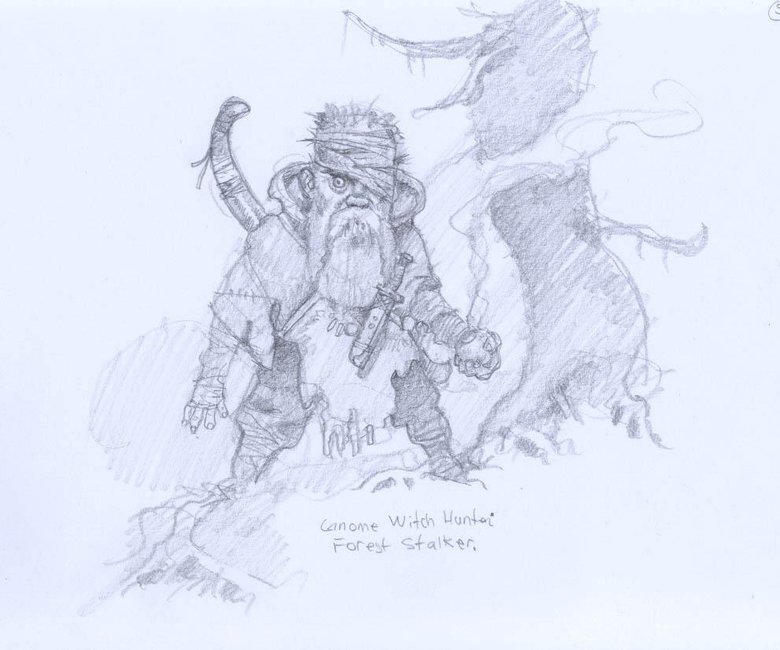 I want to try sketching him from the back. If I am designing him for comics or animation, we would need to see him from all viewpoints. If he were an illustration, we would likely only need to see him from one angle, but I want to figure out what his bow setup will be. He has a case for arrows, and small bags for potions and spells to attach to said arrows, if and when the need arises. 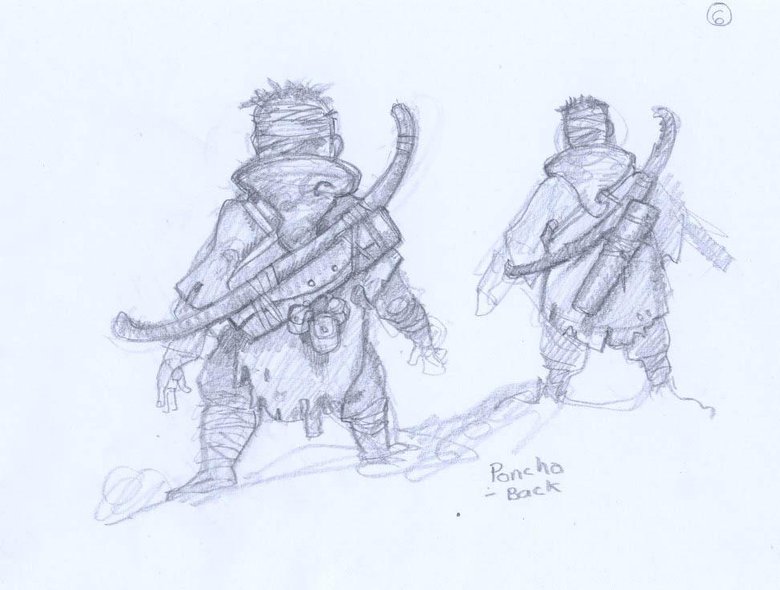 Now that I have my character and I think I know what he looks like, I need to make sure I can draw him and re-draw him as many times as I need to; for example, if this is a comic book character, I will need to draw him a lot. This is where I start to reverse-engineer him and try to formalize his proportions and the basic shapes that make up his design. If time permits, there would be a lot more of this kind of preparatory drawing. You want to know your character inside and out. You might also want to write a backstory for your character so that you really understand them. 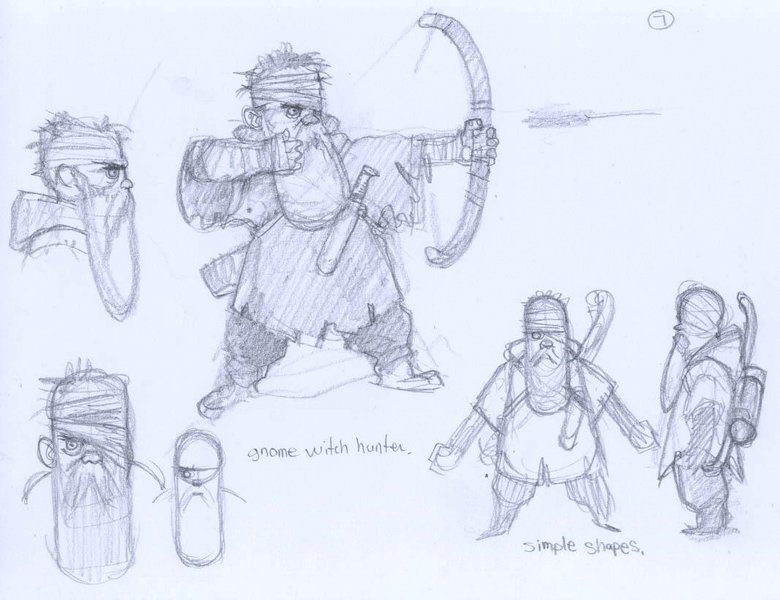 To see how well I know my design, I try out a few basic poses. This is another place where you will want to do a lot more study and practice to really nail down your understanding of your character. Draw dozens and dozens of poses and make adjustments to the design if you have to, to make them easier to draw or to make their movement more believable. You want to make a character that is fun and reasonably easy, or at least comfortable for you to draw, especially if you have to draw them over and over again. 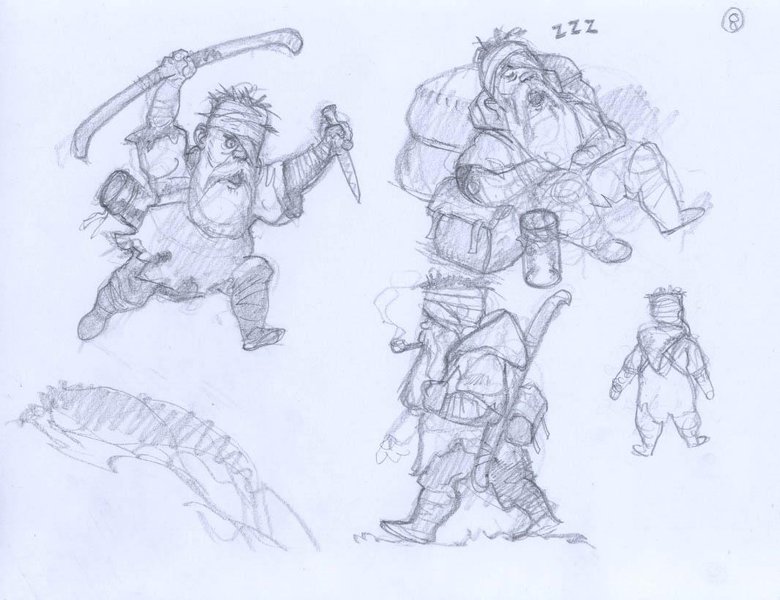 A couple of final pose ideas before I draw my finished piece. I want the silhouettes to read clearly and I want the poses to really show this character in his element. He is hunting a witch. 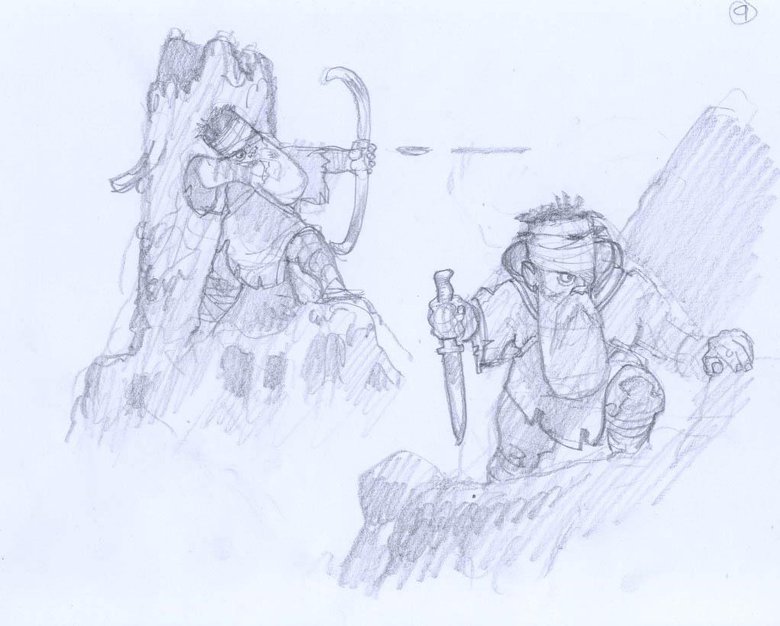 This is the final drawing of the character, posed on an old pine stump. Perhaps I will present this to a client as a potential character design, or maybe I will show this to a writing partner to let them know what I have in mind if we are working on a story together. I have given him his gear and added a crucifix, because you never know. I have tried to incorporate everything discussed so far into this final drawing. If the client wants to see more, I can go back to my previous roughs and cobble together another design, and another if need be. Keep drawing and keep thinking. 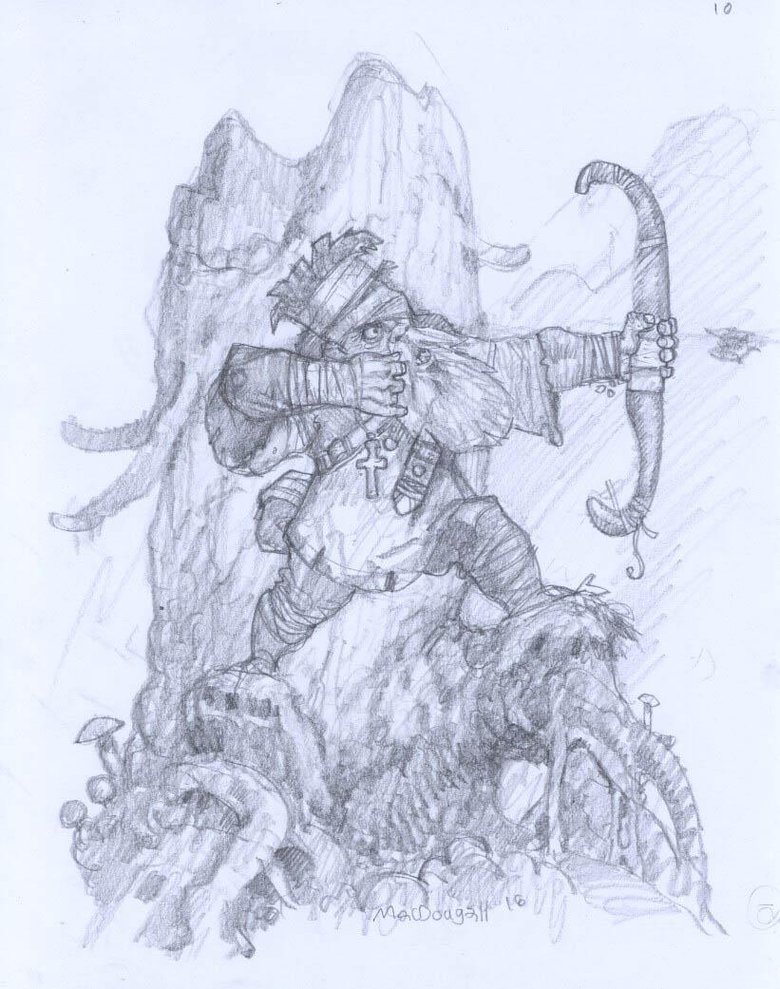