Find out how Josh Feldman created Senn on a shoestring budget using CINEMA 4D, a feature film set in a dystopian future...

Find out how Josh Feldman created Senn on a shoestring budget using CINEMA 4D, a feature film set in a dystopian future...

Set in a dystopian future on a forgotten planet, Josh Feldman's feature film,Senn, is not an action picture, or even strictly science fiction. It's the story of a young manwho finds himself confronted by strange phenomena that sends him on an ethereal mission that could change the course of civilization.

Bringing such an intellectually rigorous concept to life on a minuscule budget was the challenge faced by San Francisco Bay Area-based Feldman, a director and graphic artist, and his co-producer husband, Britton Watkins. "Our goal was to make something we would like,” says Feldman, who undertook a crash course in Cinema 4D to make the film. "We're both science fiction fans, and we wanted something with a lot of depth. It ended up being more of a philosophical film.”

The Bay Area duo co-wrote the screenplay, which centers aroundSenn, a young factory worker who begins having disturbing waking dreams. Just when he thinks he's lost his mind, an alien life form appears and escorts Senn and his girlfriend, Kana, light years away to a place where Senn must fulfill a preordained mission.

Feldman and Britton pushed themselves to stick to a "nano-budget”—about $15,000 from start to finish. They accomplished their goal by shooting at public exterior locations and using free and purchased 3D models that they modified in Cinema 4D. Feldman's music-related side project, Cubosity, made the soundtrack.

Feldman has been making short films on and off for about 20 years. (See some of his previous work here: http://sennition.com/about/previous-work/.)Filmmaking may be a side gig for Feldman, a creative director and graphic designer who graduated from the Rhode Island School of Design and served as creative director at internationally known Frog Design for seven years. But his passion for the art form has gotten him profiled in the New York Times and written up in Wired magazine. Senn is his first feature-length film.

"I've always felt that film was the perfect medium to combine all the disciplines I enjoy: photography, writing, music and design,” he says. "We were definitely leaping into the deep-end making a feature-length film, but we like to experiment and try things we've never done before.”

Building On a Base

Feldman and Watkins worked with a skeleton crew for the roughly two-week shoot, as well as post-production. They worked with an assistant director for a portion of the shoot, and then brought on Los Angeles-based 3D animator Andrew Knizek to help with modeling, rendering and animation. "The biggest challenge was not having a large crew and having to lug all our equipment in and out every day and setting everything up,” says Feldman.

Josh Feldman used C4D to create the film's black web matrix. "Then I animated it so the orbs would move
randomly and appear to be undulating,” he explains

While Knizek provided post-production animation help, financial necessity dictated that Feldman quickly get up to speed with Cinema 4D. "I don't consider myself naturally good at anything 3D, but I was able to figure out how to use the software to do things like deconstruct the models of a tank and helicopter that we bought online and turn them into other things like spaceships and shuttles,” Feldman says.

He started by deleting parts of the models that he didn't want. Next, he used various MoGraph tools to create entirely new shapes for the models. "Half of the look we were going for was achieved with careful lighting, setting up spotlights in strategic places and leaving parts of the model dark if that heightened the visual effect,” he explains.

This starscape was made from free online images, and the ship from repurposed 3D models of helicopter parts. "The disc-like things were something that came off the back of a dump truck,” says Britton Watkins

"It's basically how they did the Death Star in Star Wars all those years ago,” says Watkins. "They used plastic models: we used digital model parts. For example, we would take the body of a helicopter and rotate it on itself five or six times so the tail would end up making this interesting star part that didn't look like it would come from an Earth military mindset, but from a military mindset in some other culture.” 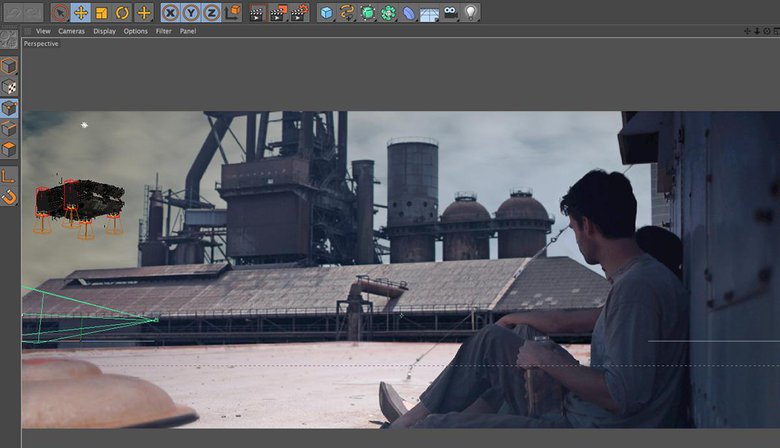 To stay on deadline and budget, Feldman and Watkins also created scenery and landscapes by using Photoshop and After Effects to tweak and composite Creative Commons-licensed photosthey found online. The film was finished just two days before its premiere at the Another Hole in the Head portion of the SFIndieFestin San Francisco last year, where it won honors for Best Local Feature.

Feldman used C4D's physical render for the depth of field in this shot. "If I was short on time,
I would do two passes and blur one of them,” he says

Senn was also a 2014 Official Selection at the Boston Science Fiction Film Festival.The film received almost unanimously positive notices, with a reviewer for Yahoo! describing it as "visually magnificent.” After some months on the festival circuit, the film is now available on Hulu and Amazon Prime, as well as via the website http://sennition.com. "Doing almost all of the work ourselves to complete Senn was very satisfying creatively,” Feldman says. "It was quite hard at times, of course, but so worth it. With the release of the film, Watkins is now at work on a documentary project. Feldman has written a science fiction novella, which he'll be releasing online later this year.