After working for ILM on Ang Lee's Hulk, VFX Supervisor Christopher Townsend relished opportunity to get "another crack at the big green guy” in Age of Ultron

Having worked as an artist at ILM on Ang Lee's Hulk (2003), Visual Effects Supervisor Christopher Townsend (Iron Man 3) relished the opportunity to get "another crack at the big green guy” with Avengers: Age of Ultron (2015) helmed by Joss Whedon.

"We did a lot of performance motion-capture with Mark Ruffalo [Zodiac]," said Townsend. "When he was acting on set, with the other actors, we had witness cameras photographing at the same time as the movie cameras. We had a special head-mounted rig that Mark put on every time he came out: we put dots on his face and had these two small video cameras pointed at his face so we were able to use that to track the position of what his face and muscles were doing. The animators at ILM used that information as a base but often veered off dramatically because the Hulk can do things that Mark Ruffalo can't, in terms of his facial performances.”

"The Hulk is not just leaping, roaring, and hitting things. There are some beautiful intimate moments"

Muscle simulations were reworked and a new rigging system was created, while a great deal of attention was spent on conveying a sense that there was a soul beneath the bulging mass of green skin. "The Hulk is not just leaping, roaring, and hitting things. There are some beautiful intimate moments in there which is something we haven't seen as much of before.”

An Artificial Intelligence, which takes the form of a robot, orchestrates a global genocide against human beings. "Ultron was fascinating,” observes Townsend when discussing the formidable antagonist voiced by James Spader (Stargate). "James turned up on set and was put into a motion-capture suit. We showed him the illustrations and animation tests. We did a variety of different movement tests. James had a brace on his arm and weights on his ankles, so it would help him move in particular way. We recorded his performance and took that data back to Trixter, who worked on refining the movements. When you look at this broken-down robot, the Ultron Mark 1, at the beginning of the film, you really see James Spader.”

Ultron Mark 1 then evolves into a more sophisticated robot. "For Ultron Prime, James Spader walked around in a more elegant manner.” ILM was recruited to produce a complex facial-rigging system for Ultron Prime. "ILM created a series of mechanical and floating panels on his face that move around but stay rigid so that you can sense that they are made of metal. The fine panels around the eyes, lips, jaw line, and nose allowed him to emote so you could understand exactly what he is thinking.”

Ultron Prime constructs a robotic army of less refined versions of himself. "Some of them as individuals play bigger roles, but they are clones of each other,” explains Townsend, who hired Double Negative to create the Sub Ultrons. "There are many hundreds of them that you see at certain points in the film. The Sub Ultrons are autonomous but Ultron Prime has the power to become them. When a Sub Ultron is being spoken through, by Ultron Prime, its colour changes from blue to red.”

Ultron Prime also genetically manufactures a perfected version of humanity known as Vision. "Paul Bettany [A Beautiful Mind] was a great pick because of his subtly and the self-confidence in the way he performs as an actor.” The goal was to create a visually ambiguous character. "I wanted to take the reality with our actor on set and push it into a synthetic world.”

Lola VFX was given the task of taking digital makeup to a new level. "I wanted to smooth out all of the pores on the skin and create a subtle subsurface so there's a little translucency through his skin.” Cut lines made of metallic groves appear on the face. "They have a different material quality to them. You have panels which are close to the skin depth, others which are deeper and some that are slightly raised above that.”

Fleet-footed Pietro Maximoff/Quicksilver (Aaron Taylor-Johnson) makes a cinematic appearance. "Trixter created these silky blues wispy trails with ribbons of light that Pietro emits as he moves through the world,” remarks Townsend, who was inspired by the kinetic paintings of Sir Francis Bacon. "We photographed Aaron Taylor-Johnson at 120 frames per second. Even though we wouldn't be using the super slow motion in the film we would use that footage to create the trail.” He notes: "If you're shooting at higher speed, you need a lot more light, so that adds to the practical consideration on set. It was great working with Ben Davis [Cinematographer] making sure there was enough lighting. A lot of it was trying to find how light would ping off of his suit which would drive the blue streaks to ground it in reality.”

Pietro has a twin sister named Wanda Maximoff/Scarlett Witch (Elizabeth Olsen). "The geometric hex power energy ball is fine in the comic books but looked out of character in the film as a moving image. We toned that down and tried to make it a more organic but spherical effect. We used smoke simulations as a base and created hot edges to make it more magical. 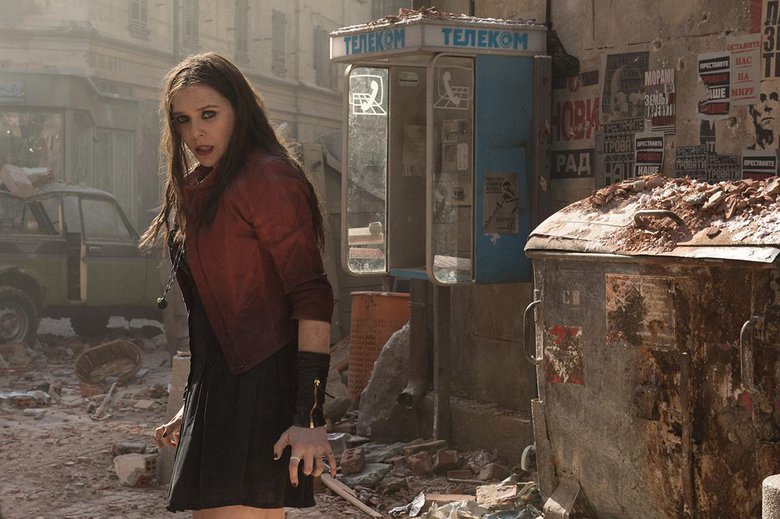 Elizabeth Olson [Godzilla] worked with a professional dancer on set and they worked closely with Joss Whedon to create a set of gestures and movements, particularly in the hands, that would help us. We used that movement as our base on how the energy was created.”

"It was great to work with a suit as massive as the Hulk Buster,” states Townsend, who had to maintain a resemblance to previous Iron Man outfits while creating something distinct. "It's not literally Iron Man putting on an extra big suit; he's crouched in the torso.”

The Hulk Buster, which was invented by Tony Stark and Bruce Banner to contain the Hulk, gets to battle the green and mean Avenger. "ILM did the work on that whole sequence and created a methodology for the way the Hulk Buster moves. Legacy FX created a full-size hand and helmet which we used for lighting and scale reference on-set when we were shooting in Johannesburg.”

With the destruction came consequences. "We tried to keep it grounded and as real as possible. When a building falls down or is being crushed you want to feel the scale. It's terrifying.” Earthquake footage was a source of reference while some creative license had to be taken in order to be cinematic. "If you bend a piece of metal in real life it is not that impressive; in the movie world it can be bent in a way that's more interesting and has a beautiful shape.”

Pre-viz and post-viz was critical in being able to execute actions sequences such as the Hulk Buster Fight. "The Third Floor worked for months giving us pre-viz and post-viz to set up how we were going to shoot and cut it,” states Townsend, who collaborated closely with the editorial team of Jeffrey Ford (The Yards) and Lisa Lassek (Serenity). "What the editors are able to do with Avid is phenomenal as a tool, to give us a guide of what they need and want.”

"Joss has tried to do was to take Avengers: Age of Ultron to a darker place while maintaining the humour which made the first one so great"

Nearly 3,000 VFX shots needed to be produced, with the main vendor ILM handling 800; the rest of the workload was tasked to 19 different visual effects companies located around the world. "A beautiful thing about a film like Avengers: Age of Ultron is that I get to work on the creation of digital characters like Hulk, Ultron, Sub Ultrons, Iron Man and the Iron Legionnaires, imagine what the Internet looks like in cyberspace, figure out a way to portray a new character like Vision, there's massive destruction, set extensions, huge digital environments, and all of the effects type of work like the Pietro trails and Wanda magic.” Christopher Townsend notes. "What Joss has tried to do was to take Avengers: Age of Ultron to a darker place while maintaining the humour which made the first one so great.”