Daz Studio is already a handy software to use, with its preset 3D models, but here’s 7 essential plugins to add even more scope!

Plugins are a fantastic way to extend the functionality of a piece of software. It opens the door for users to take a piece of software, in this instance Daz Studio, and make it do more than the creators of it have managed to so far. Some of these plugins end up making it into the software itself and other plugins sit well alongside the main software package. Daz Studio helpfully provide a database of these plugins on their website and we’ll pick out 7 of our favorites that will make your life easier. Let’s head on in.

This is a cracking plugin to get us started. With just an iOS device that has a TrueDepth front-facing camera and one of the supported Apple ARKit Apps you can capture the motion of your face and translate it directly to your 3D character. Through the FBX file format you can easily take the motion capture data from your iOS device into Daz Studio. It is within the Face Mojo plugin that the magic really happens though. Through 50 hand sculpted face poses and a set of controls to tweak your motion capture you can really bring your facial poses to life. This plugin works with both Genesis 3 and 8 characters. 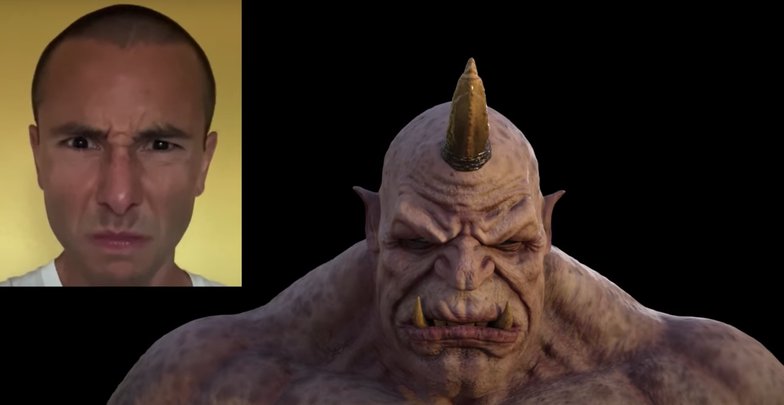 Got a photo of a person that you want to recreate in 3D? Simple. Just use the Face Transfer Unlimited plugin. After uploading your photo into the plugin it’ll work out all the data required to recreate the face shape, bone structure, texture and tone in a 3D format. If you need to recreate specific people in your 3D world or you just want to speed up the process of creating realistic looking faces then this is a great plugin to try. If you want to give it a spin then there is a free version that is built into Daz Studio but if you want to remove the watermark that is applied then you’ll need to upgrade to the pro version. 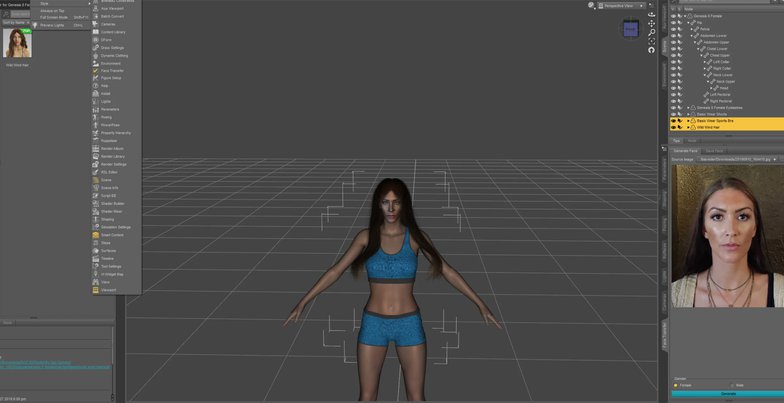 We’ve all been there, haven’t we? We’ve found a really nice 3D model that will look absolutely perfect in our project. We download it and import it into our scene only to find that it’s stacked with so many polygons that it slows our project right down. Problem! Up steps the solution, the Decimator plugin. This plugin reduces the number of polygons that are used to create a mesh. In essence, it simplifies the mesh. There are lots of times when a plugin like this comes in useful. One of the main uses is where you want to take your high-poly models into a game engine and where you can’t guarantee that the end users will have enough processing power to handle such high poly models.

This isn’t the most creative or pretty of plugins but rather falls into the category of useful plugins that will speed up your workflow. ‘Scene Optimizer’ does exactly what you’d expect it to; it optimizes various aspects of your scene to reduce the amount of memory required and to speed up your rendering. You can optimize maps based on the distance from the camera, the texture map size, number of maps or the number of faces in a mesh. This optimization includes reducing map sizes or even removing certain maps that are slowing things down. You can also subdivide high-resolution meshes to make handling your scene data quicker. All of these optimizations give you a faster and more responsive viewport and even enable you to utilise IRay GPU rendering which wasn’t possible pre-optimization. 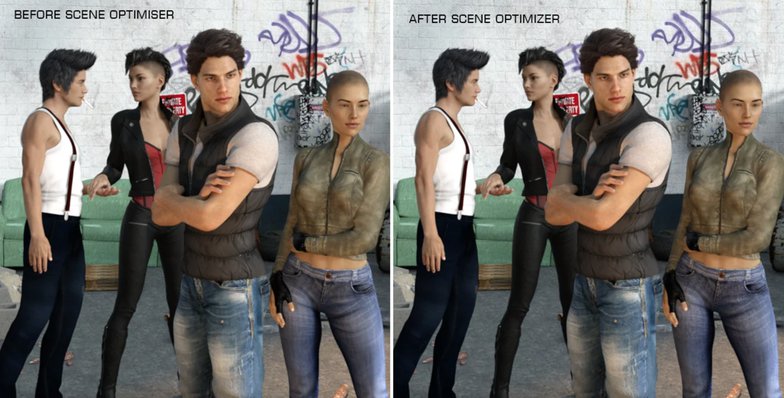 This plugin is a fluid simulation plugin. There are better fluid simulation packages for other pieces of 3D software but this seems to be the best one for Daz Studio. This simulator lets you simulate liquids opening up the doors to create water, waves and whirlpools as well as more viscous liquids such as honey. Beyond liquids Fluidos will also let you simulate both smoke and fire. We rarely want these effects to be in isolation but rather need them to respond to outside forces such as other objects or obstacles. Fluidos handles all this with the possibility of not just one force acting upon a liquid but multiple forces. This plugin is GPU accelerated and is compatible with Windows 64-bit and macOS 64-bit. 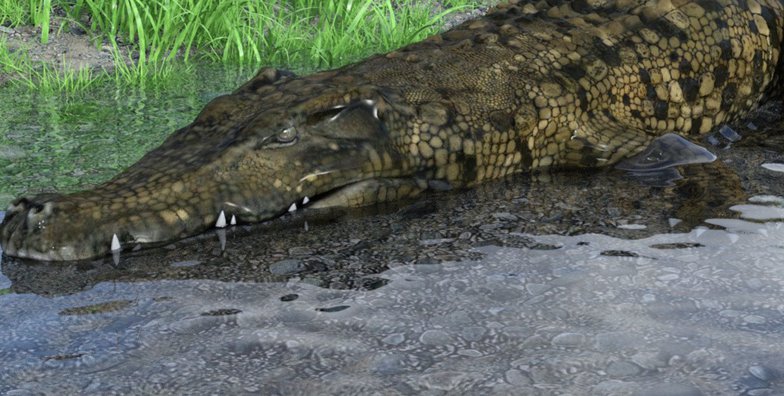 This, if you didn’t guess, is an animation plugin! It’s main selling point, I think, is its ability to chain together multiple animations to form a set of movements for a character. Your animations can be created and fine-tuned through the use of keyframe animation as well as the Graph Edit. All of these animations can be previewed in the viewport so you can see exactly what you’re creating. AniMate 2 also includes ‘Audio aniBlocks’ which let you set up your animations based on audio. 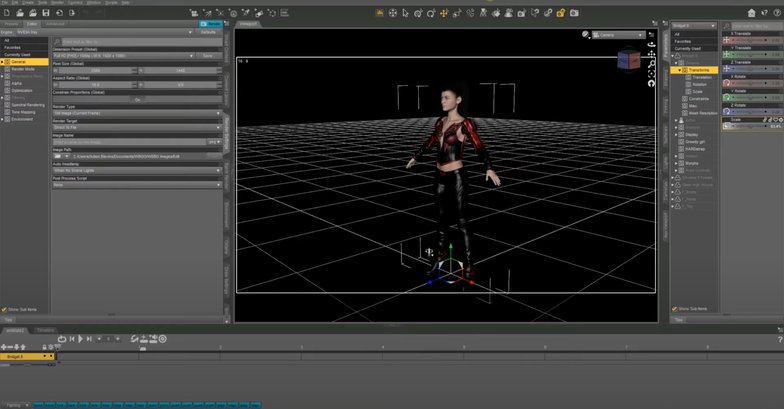 This plugin is a collection of scripts that enhance Daz’s camera capabilities. Through the plugin you can create, access and use cameras as well as extend the functionality of the built-in tools. The highlight of this plugin, for me, is the depth of field script which makes it easy and straight forward to set the focal distance of your camera to ensure the right part of your scene is in focus. It also lets you adjust the f-stop of the camera to give you control over how narrow that depth of field plane is. Alongside that script you can also create cameras that show you the point of view of a character. And finally, this plugin gives you some tools to let you optimise your renderings in IRay by utilising ‘Cutaway planes’ which dictate what is and isn’t rendered. 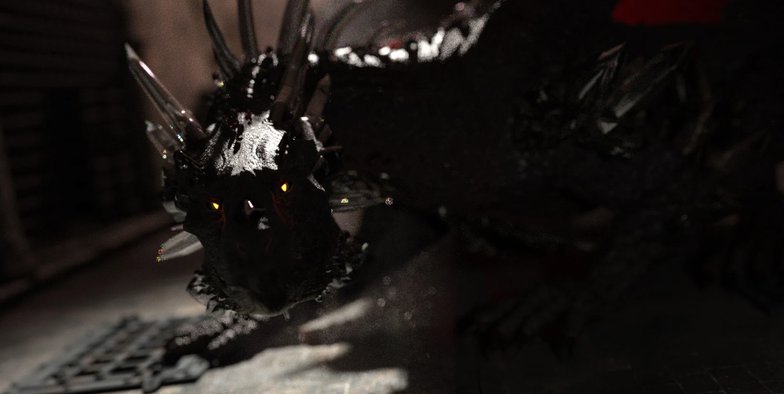 We hope you enjoyed this set of plugins for Daz Studio! Don’t forget to add any plugins that you love in the comments below. It’s always worth trying new plugins and keeping an eye on what’s out there that can make your life easier. And if it’s not out there why not do the whole 3D community a favor and create a plugin of your own!