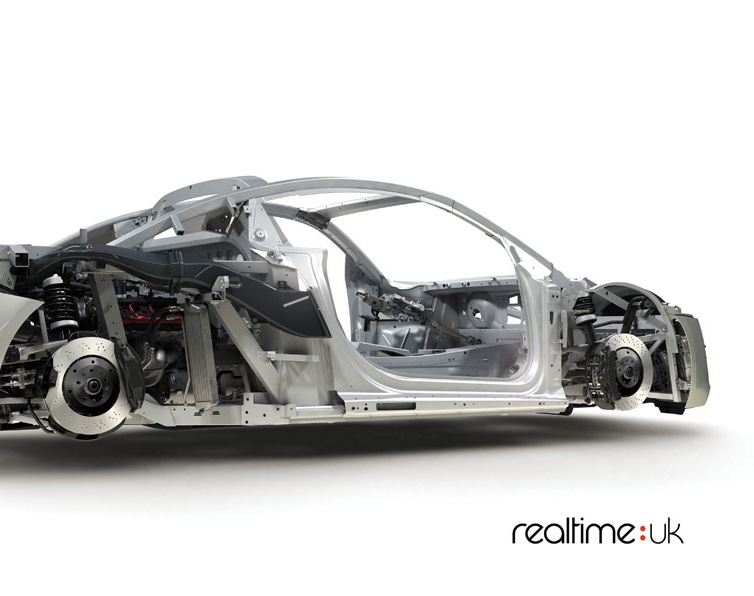 The brief was to create an animation that showcased 12 build processes of the Audi R8. The animation forms the core elements of the new Audi R8 microsite and transports the viewer through from a frame to the finished, polished car.

The team at RealtimeUK also created supporting print imagery, based on the animation, which will be used within banner adverts as part of the R8 online launch campaign.

RealtimeUK?s team started with the space frame and worked to optimise the supplied data. They applied surfacing to emphasise the advanced all-aluminium body, which is a key aspect of the R8 that gives this super car such a lightweight feel.

One of the most outstanding features of the R8 is its powerful V8 engine. This is a crucial part of the build process that RealtimeUK highlighted by illustrating the engine being integrated into the car, along with the quattro permanent four-wheel-drive. This V8 engine affords the R8 its dynamic performance and its super acceleration.

With the design being such a fundamental element of the R8, it was the job of RealtimeUK?s digital artists to texture and light the car to highlight the beauty. The large air apertures at the front and rear not only serve to enhance its aerodynamics, they are an important design feature and amplify its styling.

Wendy Hodgson, Art Director at GT commented, ?GT wanted to deliver a new kind of digital experience and Realtime UK played a crucial role in helping us achieve that. The entire project ran very smoothly and we were extremely impressed with their experience and knowledge, which helped to deliver a photorealistic animation that surpassed our expectations.