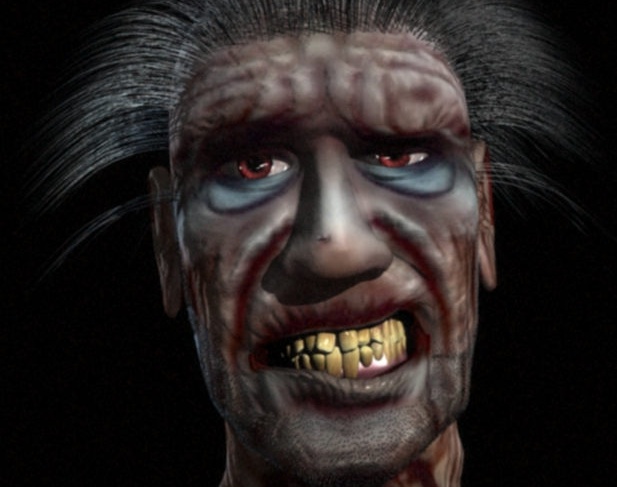 This isn't a finished image just a quick render with no touch ups.
I added a touch too much film grain on this one and the expression is somewhat off, but I wasn't concerned.
Since I started this character I will post a finished version on my site soon.
Frank is a 36 year old software engineer working in the pulp and paper industry with a love for CG. Frank has worked as a freelance illustrator for 10 years, and presently lives on the east coast. His work has been published in many CG trade magazines, software product packaging, video card packaging and books (including his latest Inside trueSpace4 for New Riders). Frank can be spotted demoing 3D software at SIGGRAPH and hopes to see his name in film credits someday. You can see more of Frank's work on his web site.
Behind The Scenes: The head was modeled and rendered in Hash Animation Master on a quad 400mhz Xeon ALR workhorse. One rendered frame of 'Asylum Patient' took three hours. Frank created a character sheet before any modeling work was started and prefers to use his actual sketches as reference material instead of scanning them in and tracing over a digital image (rotoscope). The textures used in the image were created in Photoshop using color splotches smudged together in a technique similar to working with pastels. The modeling task was a lot of fun for Frank especially since Frank prefers to model with Splines whenever possible. The modeling started with a single Spline that defined the characters brow. From there Frank modeled the eye sockets and eye lids, cheekbones and mouth. When he was satisfied with the preliminary modeling he started to work on the textures needed then later returned to modeling the ears and the back of the character's head. Frank often jumps from task to task when working alone to keep the project moving and to break up tedious work into more enjoyable sessions.