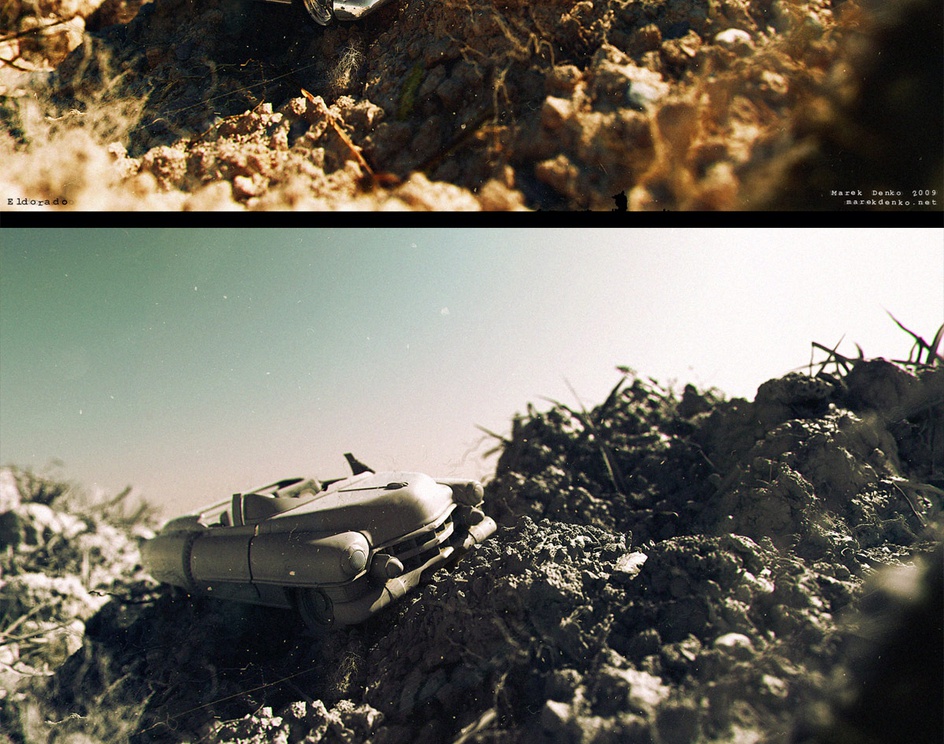 After a while I’ve finally finished my new personal project called “Eldorado”. Soil was originally made for a commercial print but client refused this version, asking for less violent soil, and so on and so on … We all know how clients/studio stuff works. I kept the soil scene and decided to use it for my own project since I pretty much liked it. I added lots of extra features, like grass strands, roots, leaves, and other small bits here and there. At the beginning I wasn’t really sure what would be the hero of the shot. I was thinking about a tennis ball, golf ball, pack of cigarettes, bottle, etc., but at the and one little toy car won. Here is why: While I was in Los Angeles in 1Q of 2009, I bought lot of toys for my son, Adam. All those action figures like Alien, Predator, Spawn, cars like Audi TT, Ferrari and a couple of smaller cars I took just because I liked them. As the months passed by I started to find these toys in places all over the house and garden, almost destroyed by little 2 and 28 years old boys. I took one of them and decided to put it into this soil environment. It was one of those cars I bought just because I liked it. The 1953 Cadillac Eldorado. And that’s the story … the rest is just my usual 3ds Max, V-Ray, Photoshop, a bit of Fusion, and couple of hours per day. Routine indeed! I was surprised that it has a HUGE amount of polygons. Something around 1,566,320,053 (yes it’s over 1,5 billion!). I never really cared and I checked just now while I was writing this promo text. There are mostly instanced models so it was all rendering using just 8-10GB of RAM. Scene was rendered to 5000×3200px resolution and it took around 7 hours on my 8 core machine with 16Gb of RAM. Dedicated to my family.