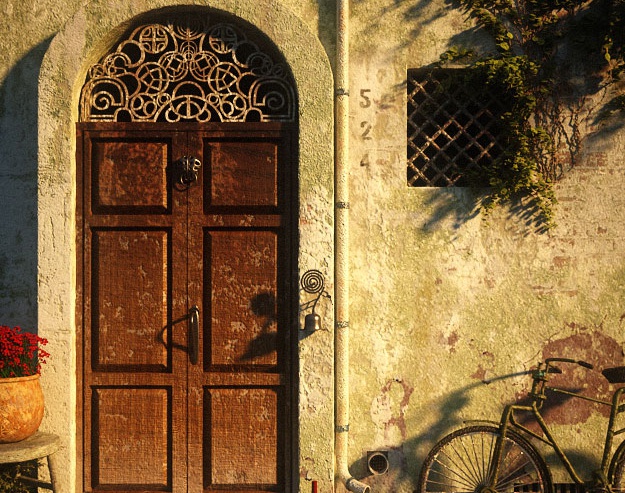 Well, after a huge one and a half year break from the CG world, I finally decided to construct my new 3D scene entitled Tuscany the Beauteous. I've been working on this piece for 9 months on and off (quite a while, I know). This has been my most appreciative scene so far, as I view this as my best work.

The story behind this scene is about an old WW2 veteran from Italy that was drafted into the war. He grew up in Tuscany and lived in the main house shown in the image. Unfortunately he lost everyone close to him during the war, and led a lonely life of solitude from then on. He had no one to come back to, and he was in a state of despair for many years. He tried to make up for his loneliness by staying close to his new pet, and becoming socialable with the rest of the neighbourhood. He was a cheerful man in everyone else's eyes, always conversing, and was highly regarded as one of the town's most nicest people. He would get up every morning to get his newspaper and greet the shopkeeper across the street. Then one day, he didn't come outside in the morning, and this continued for the next few weeks. The locals were confounded and curious as to why he had stopped coming out. His dog wasn't barking anymore either, which they also found odd. Rumour has it that the dog passed on, and the old man had grown so close to him that he had no will to go on anymore. Nobody knows for sure what happened to him, though...

Highly inspired by Juan Siquier, I have always enjoyed viewing his wonderful European scenes and really appreciate his style of work. I dedicate this image in his honour, as well as for my Father and Great-Grandfather.

This scene was created in 3ds Max, rendered in VRay, and some minor image adjustments were made in Photoshop.