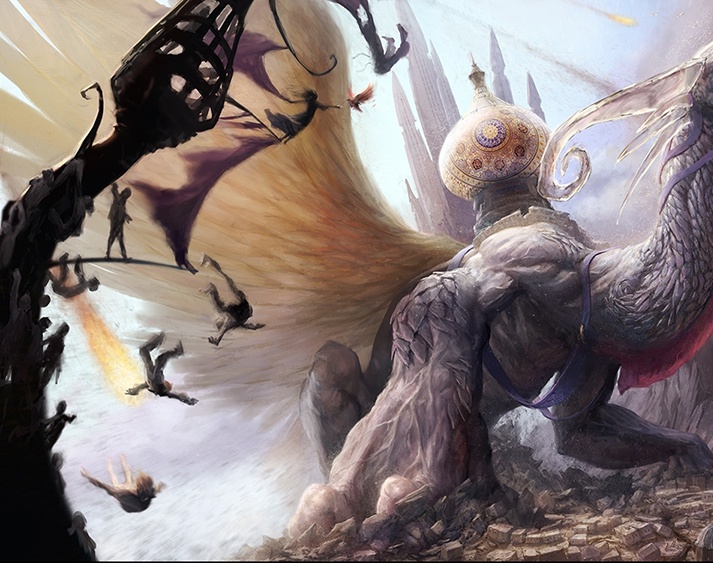 There are remanence of an old text, one that belonged to a "Scribe to the Smiling Magicians", as the inscription on the inside cover tells. In it there is an entry, which more than any other in that aged tomb, has troubled scholars for decades. Here it is in its translated entirety, titled"When We Left Earth": For centuries a great empire has ruled across these lands, that of my masters; the Smiling Magicians. While its technology is not great, its command of magic is awe inspiring. With this magic my masters have erected great citadels of power with spires that reach to the sky and cover the land with their stretching shadows. Imbued with the intricate designs of old world knowledge, they tap into the deep energy of the world and help empower my masters. With this energy, the Smiling Magicians have crumbled great mountains, they have diverted roaring rivers, called upon great beasts, but alas they [i]can not[/i] control the heavens themselves. For eons the greatest of them, a Magician older than any other; Sahasun, prophecized that a day of reckoning would come from above, and while the Magicians believed it, they nonetheless continued to Smile and suckle from the worlds strength. They allowed themselves all of the luxuries one could conceive while lowly and worthless peasants rotted away from slavery, famine and plague on their( Translators Note: "our" is crossed out here and replaced by "their") doorsteps. This was so for countless of Red Summers… Then, upon a day like any other, as was foretold it came to be, and judgment rained upon the sinful kingdom, but my masters were clever and long prepared for the day. Centuries before the empires foundation was built they imprisoned great serpentine creatures, dragons with feathered wings and crystalline horns, who they buried under the earths crust to sit dormant, waiting for the summons to once again spread their wings and take to the skies. My masters have left now w