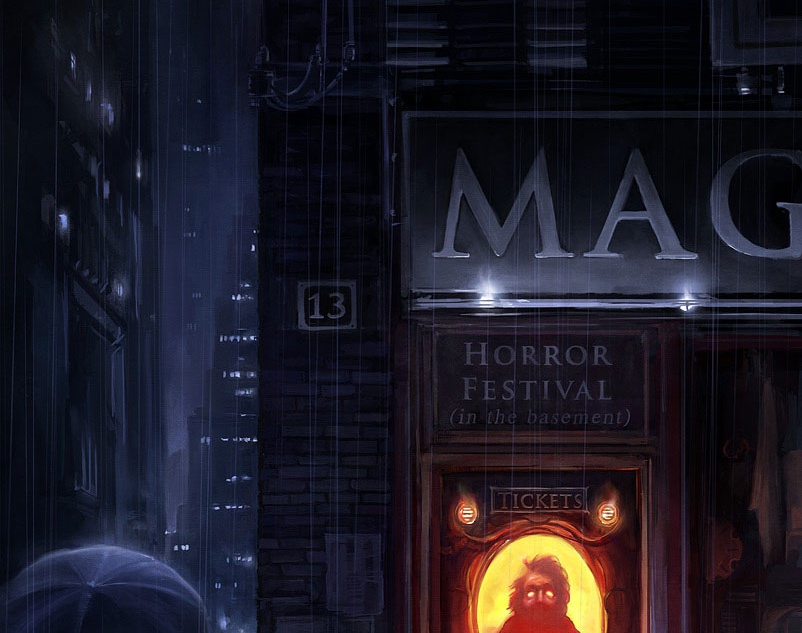 This piece is quite personal as it's a reinterpretation of something that happened to me when I was about 9 years old. I was with my family at Lisbon's fun fair and we were at the Ghost Train ride. I insisted to go alone in the "wagon", convinced I wouldn't be afraid of anything. As it turned out, as soon as the first puppet witch appeared I cowered inside the wagon and closed my eyes and ears so I wouldn't hear the echoing laughter and screams (when I close my eyes I can still see her!). I came out really scared ? But now I love everything horror and fantasy related. This painting is also homage to Lisbon's original fun fair ? the "Feira Popular", which ceased to exist (political issues!). There was dirt, smoke, neon lights ? it all had a gritty underground feeling to it that really contributed to its magic. I wish I could go back to those times ? but I will always hold fond memories of it. I was also inspired by the movies "Big" (the Zoltar machine), "Ghostbusters 2" (Ray's Occult Books) and "Blade Runner". I hope you like it and perhaps some of you will even identify with the image!