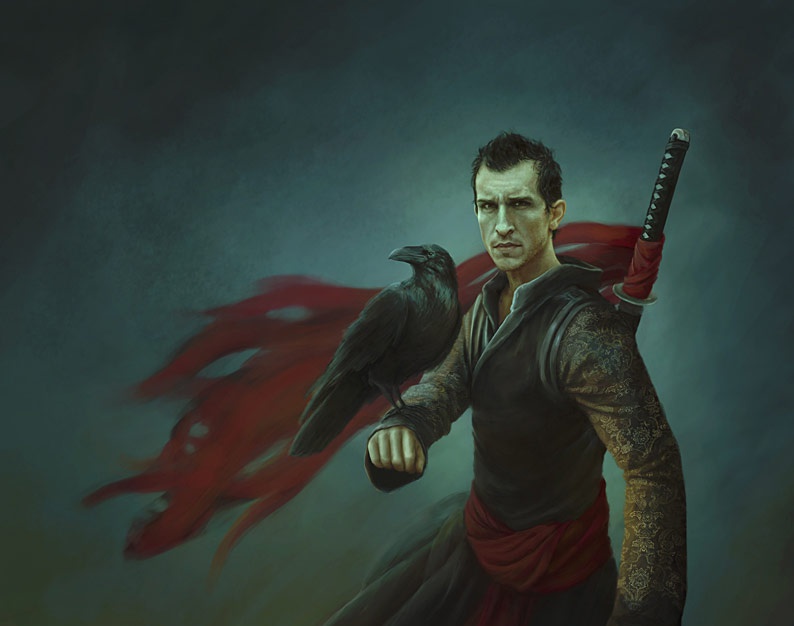 Model: Francisco Randez. The idea for the Guardian came from several sources, adapted to fit what I had in mind during a working process that changed the image quite a bit from concept to finished piece: Ravens have been attributed throughout history with many things, and according to some are the creatures that carry our souls from this world to the next. There's also a well-known legend surrounding the Ravens of the Tower of London: Should the Ravens ever leave, "the White Tower will fall, and with it the Empire". To this day, 6 Ravens are kept at the Tower, protected by their Keeper, and if necessary by force. One might argue about who's the guardian, and who the guarded. The katana is another symbol for the soul or spirit, namely of the man carrying it, as it is said to be a vessel of or for the warrior's strength and spirit. The coat he is wearing is not a Kimono, but a mix between that and a traditional Turkish Üçetek (three-skirted cloak). While Turkish coats are fastened in several different ways, the left over right closure here would be the traditional Japanese way of wearing a Kimono (right over left is reserved for the dead at burial)... I wanted to keep it simple and also quite loose, focussing on the expression and the character's immediate impact rather than any kind of background. Model: Francisco Randez.